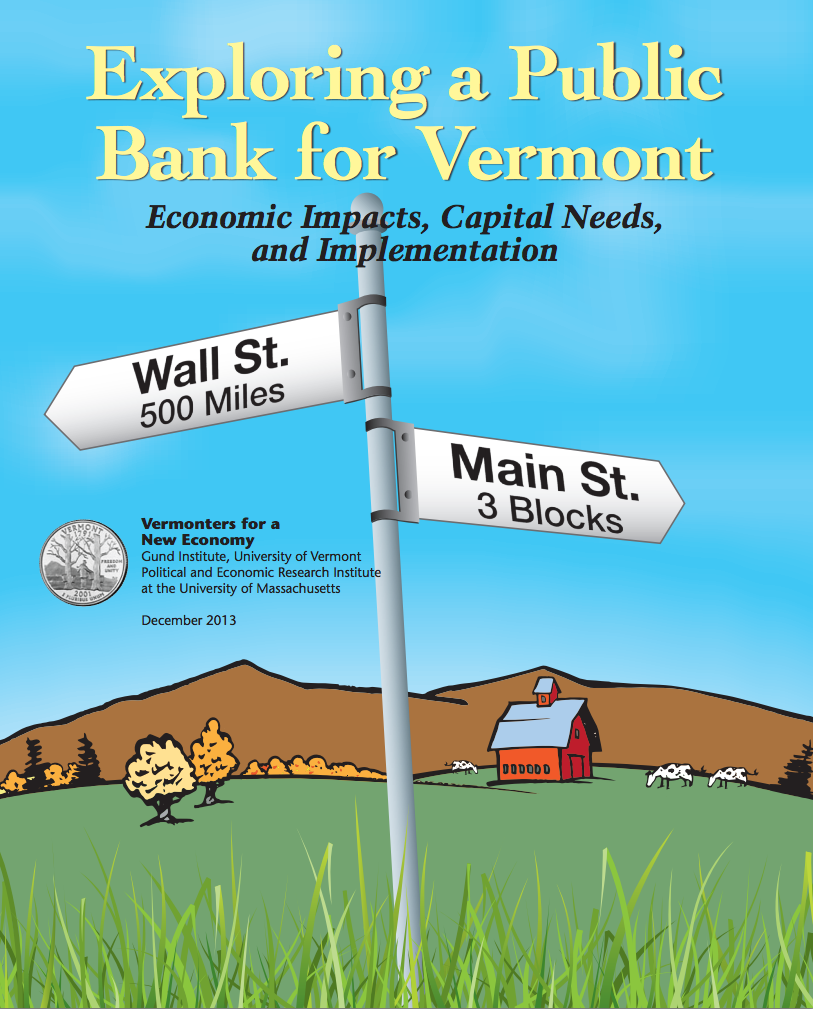 According to the organization’s website, the campaign succeeded in securing resolutions in twenty towns calling on the state legislature to establish a public bank. Among the towns was Montpelier, the state capital.

A state bank is a publicly owned bank that accepts deposits from municipal and state governments (mainly tax revenue), but can make loans to businesses and individuals, often at better rates than private banks. Typically, public banks loan more responsibly than private banks and are dedicated to supporting the local economy. Interest from loans go into the state treasury to help meet budget gaps and pay for social programs. Currently, the large majority of municipal governments and states bank with big, private banks. Vermont’s state funds are deposited with TDBanknorth of Canada, one of the largest banks in the world.

The case for a state bank is outlined in a recent report authored by Gary Flomenhoft, a research associate and lecturer at the University of Vermont’s Gund Institute for Ecological Economics. The study describes the structural flaws that make the existing banking system vulnerable, and discusses how a state bank could help to fill unmet capital needs for state and local government. The study also presents a comparison of risk between the existing system and a public banking system. The report points out a major risk of Vermont using TDBanknorth. Turns out the private bank has $3.7 trillion in derivative exposure, 44 times its market capitalization.

North Dakota is currently is the only state in the U.S. that owns a public bank, the Bank of North Dakota, established in 1919. It has contributed hundreds of millions of dollars to North Dakota's state treasury and has been a reliable source of credit to North Dakotans, even during the Great Recession when credit from private banks dried up. The study proposes a specific, alternative route for Vermont that would expand its economic development agency, the Vermont Economic Development Authority, to include a banking function.

The main benefits of a state banking system, according to proponents, is that the interest now paid by states and municipalities on public bonds goes to private, distant banking institutions; under a state banking system, interest payments would go to back into the local public sector, where it could be used to fill unmet capital needs, pay for social programs, and potentially reduce taxes. Additional benefits, say proponents, would be lower student loan rates, mortgage rates, additional lines of credit for businesses, and lower bond interest for municipalities and competitive interest on deposits.

“People are pretty angry at the banks and they want to do whatever they can to try to take away power from those too-big-to-fail banks,” Flonehoft told Vermont Public Radio in February.

Opponents of state banks argue that deposits would be less secure in a state banking system and that credit rating agencies may look unfavorably on the creation of a state bank and lower the state’s credit rating, thereby making loans more costly and damaging the economy.

Twelve states considered bills for state banks in 2012, and in October 2013, the New York Times Room for Debate series took up the issue, with experts arguing both sides and one commenter calling for a national infrastructure bank.