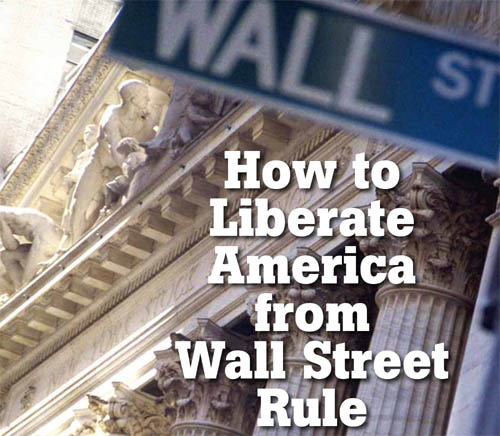 In the wake of the 2008 financial crisis, Wall Street has recovered, largely thanks to the generosity of tax payers. However, those very same citizens continue to suffer high unemployment rates and minimal credit access. Despite the woes plaguing Main Street three years on, the powers that be have yet to fully address the issues, let alone devise a solution. According to a new report, “Doing so would expose the reality that the United States is ruled as a plutocracy, not a democracy, and would focus citizen anger on the structure of the institutional system that gives Wall Street bankers their power.”

In How to Liberate America from Wall Street Rule, some very smart people lay out a six-part agenda that would help Main Street thrive once again. The foundation of the remedy is a public banking system through which infrastructure and other projects would be financed in order to build community wealth and democratize local economies. 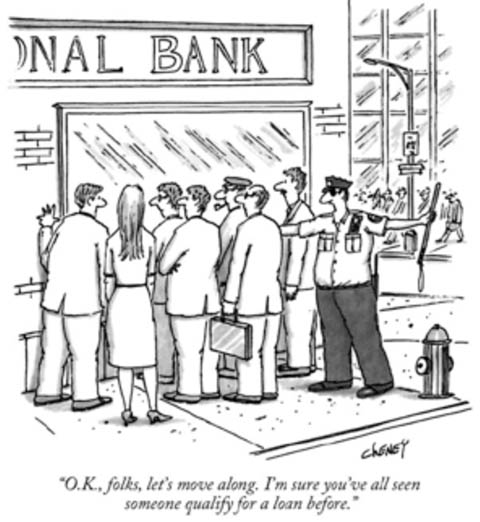 Editorial cartoon by Tom Cheney for the New Yorker.

As the natural first step toward true recovery, the report also seeks to build awareness by starting a national conversation about the American financial structure. The set of proposed questions force us to – collectively – assess where we are in relation to where we want to be, and to understand the difference between phantom wealth and real wealth.

One of the things the study identifies as being lost along the way to the free market is, essentially, our humanity: “In the earliest human societies, money was unknown. People organized their lives around the relationships of family, clan, and tribe. They cared for one another and allocated resources to secure the well-being of all. Resource allocation decisions were local and based on the needs of the community. … In contemporary 21st century westernized societies, most of us now organize our lives around earning, spending, borrowing, and saving money. Money is our ticket to food, shelter, transportation, education, recreation, health care, and nearly every other essential of daily life. This extreme dependence on money has sweeping implications for values and the distribution of power in society.”

Perhaps it's strange to think that an institution could help us reconnect, but public banks do just that because they allow us to invest in ourselves, in each other, and in our communities. And that right there is the path to liberation.

To learn more about public banking, check out other Shareable articles on the subject:

The Joy of Public Banking: What Our State Legislators Need to Know