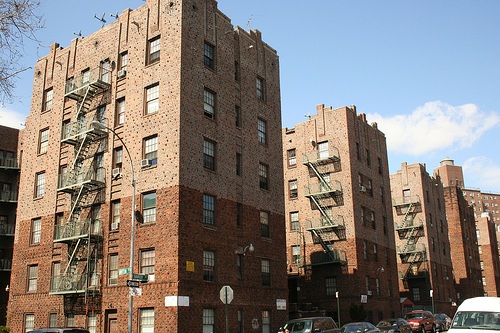 A lost fragment of shareable history in America, presented by Independent Lens, a weekly series airing on PBS:

In the mid-1920s, thousands of immigrant Jewish garment workers catapulted themselves out of the urban slums and ghettos by pooling their resources and building cooperatively owned and run apartment complexes in the Bronx. Adjacent to the newly opened subway corridor and in the midst of empty fields, they constructed the United Workers Cooperative Colony, a.k.a. “the Coops,” where they practiced the utopian ideals of an equitable and just society.

AT HOME IN UTOPIA captures their epic struggle across two generations as the Coops residents experiment with breaking down barriers of race and ethnicity, and championing radical ideas that would someday transform the American workplace.

As a community, the Coops gave its residents everything they’d ever dreamed possible in their adopted country—green spaces for gardens, sports and children’s play areas; community spaces for meetings, dances, recreation and dozens of clubs that flourished; a library with 20,000 volumes in Yiddish, Russian and English and, most of all, the sense that they lived on the cutting edge of progressive reforms that would inevitably sweep the nation. As part of this agenda, the Coops invited African American families into the complex, fostering lifetime friendships—and even interracial marriage.

When the Great Depression slammed into their dreams, residents of the Coops took to the streets, demanding (and getting) mortgage relief not only for themselves, but also for neighboring housing complexes. They demonstrated for better conditions for American workers and for unemployment insurance…

Informed by a rich cache of archival photographs, home movie footage and interviews, AT HOME IN UTOPIA tightly weaves together history, memory and the lives and landscapes changed forever by the Coops. Despite the plight of many American workers today, the film recalls a moment in time when an empowered and exalted American worker stood on the brink of being master of his fate, captain of his soul and at home in a perfect world of his—and her—own making.

You can watch excerpts of At Home in Utopia on YouTube. Here's the trailer:

The Independent Lens will be broadcasting lots of fascinating films in the new few months — here's the schedule.