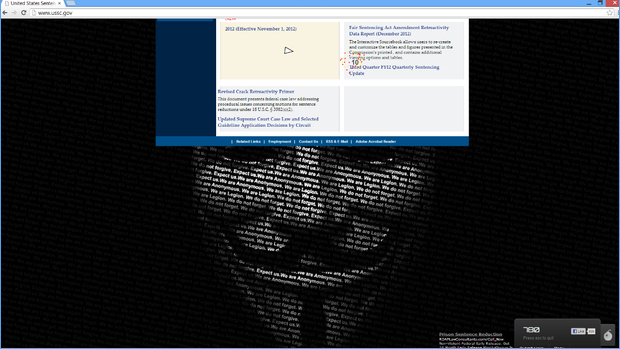 Saturday, Anonymous took down the Department of Justice’s Sentencing Commission website, replacing it with the below video. As of Sunday night, the site is completely down. The hack was the first act in what they’re calling “Operation Last Resort,” which has been launched in response to Aaron Swartz’ death. The video details their plans, motivations and demands behind this latest attack.

In the video, Anonymous claims to have a “warhead” of information culled, over months, from the Department of Justice. Spurred into action by Swartz’ death, they are now going to begin releasing the documents to media outlets unless their demands are met. The demands are quite broad:

“There must be reform of outdated and poorly envisioned legislation, written to be so broadly applied as to make a felony crime out of violation of terms of service…There must be reform of mandatory minimum sentencing. There must be a return to proportionality of punishment with respect to actual harm caused….The inalienable right to a presumption of innocence and the recourse to trial…must be returned to its sacred status and not gambled away by pre-trial bargaining…”

In short, they are demanding an entire overhaul of the justice system. Their demands will not be met, cannot be met, really, but they are entirely reasonable reforms, the sort of reforms that could have prevented Swartz’ death.

In the US, roughly 90% of cases end in a plea bargain: if even half of defendants were to demand a trial by jury, the amount of work it would require would shut down the whole system. Plea bargaining has been a major part of the explosion of the US prison-industrial complex: there are more people in prison in the US today then there were in Stalin’s gulags. Without plea bargains, the department of justice could never imprison so many people. And all too often, defendants face larger sentences for demanding their constitutional right to trial by jury: de facto punishment for refusing to go along with a justice system that strips Americans of their ‘unalienable’ rights. Combined with mandatory minimum sentencing, people guilty of non-violent crimes get put behind bars for years and years.

And ‘hacktivists’ like Aaron Swartz, Jeremy Hammond or B. Manning face incredibly heavy sentences for crimes that usually harm no one, but only serve to bring information to people: basic democratic actions that, because of their high tech implementation, become suspect.

Anonymous has made big threats before, and haven’t always backed them up with action. But the total control of the Sentencing Commissions website (Anonymous left behind an incredibly cool ‘Easter Egg’ in the site: try pressing up, up, down, down, left, right, left, right, b, a, [enter] on the page) is one of their more impressive hacks to date. We need to reform our justice system, and we need to do it now. Hopefully Anonymous’ latest operation can help us get there.