A Short History of the Word 'Sharing' - Shareable
Skip to content 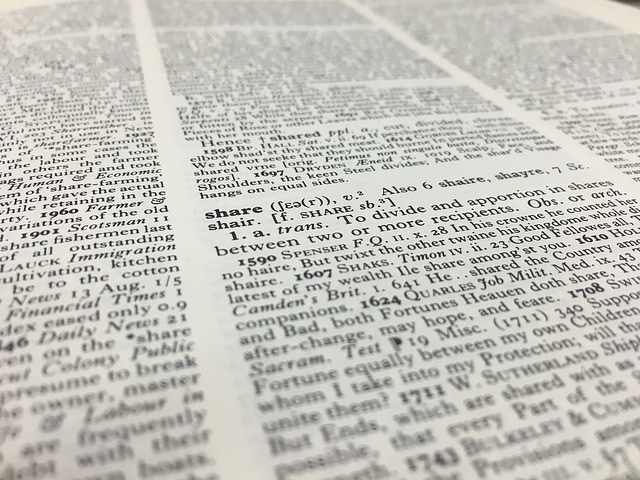 Shareable is dedicated to sharing, and if you are reading this, it is most likely because sharing interests you. But what do we know about the English word — "sharing?" Today the word is accompanied by a series of positive associations, but they have not always been there. As part of the background for my new book, "The Age of Sharing," I looked into the evolution of the word. The following is a very brief history of the word sharing.

The earliest use of the word sharing – the Old English "scearu" – referred to the groin, where the trunk of the body divides into two legs. In the sixteenth century, sharing meant cutting into parts, or cutting off. This sense of division is central to the early meaning of sharing, and also to our naive understanding of the concept: Sharing is when you let others have some of what's yours. When sharing is about division and distribution, it raises questions about distributive justice. What, we frequently ask, is a fair share?

During the nineteenth century the word sharing started to assume a communicative meaning, alongside its distributive sense. At first, the metaphor of sharing problems was rooted in the sense of sharing as distribution: Sharing the problem meant dividing it, and thus lightening the burden. It was only in the beginning of the twentieth century, however, that the talk itself came to be called sharing.

The context for the institutionalization of the sense of sharing as a type of talk — particularly intimate talk about an inner state of self — has been largely forgotten, but it is quite fascinating and continues to resonate today. My research took me back to the Oxford Group, a Christian evangelical group founded in the U.S. in 1922. A central practice of the Oxford Group was for members to sit together in someone’s parlour or drawing room and confess their sins to one another. They called this "sharing."

If this type of sharing sounds very much like the kind of talk one finds in support groups, this is no coincidence. Indeed, two members of the Oxford Group established Alcoholics Anonymous. They brought sharing to their new organization, from where it spread to become the constitutive activity of support groups everywhere. Today "sharing" is not only the kind of talk we find in support groups, but also refers to intimate communication. While the roots of this go back a century or so, this meaning became extremely widespread during the 1970s and '80s with the rise of what we might call therapy culture and the spread of the belief that the key to self-understanding and healthy relationships lay in the authentic communication of one's feelings and inner self to significant others. This is when "sharing" became linked to "caring."

At the same time, sharing also became a key word in computing. The idea of sharing has always been linked to computers, from time sharing, through disk sharing to file sharing. For many years this use of sharing was fairly neutral (even today, when you set up printer sharing at home you don't feel inspired by the values we nowadays associate with sharing). However, when it became inextricably associated with social media around the years 2005-2007, it was imbued with the positive and pro-social senses captured by the conjunction of "sharing" with "caring."

Today, the word sharing has a range of meanings and contexts of use that play off one another: it describes our participation in social media; it refers to a new kind of economy; and it is the type of talk on which our close relationships are based. It is also a site of struggle: witness, for instance, the arguments over whether the sharing economy really involves sharing (likewise file sharing).

Language is dynamic and the meanings of words can be fluid. Time will tell whether the concept of sharing will expand to include interactions based on payment (there are signs that this is happening), or whether its meanings will be restricted to what people today consider to be true sharing.

Nicholas John is assistant professor at the Department of Communication at the Hebrew University of Jerusalem. He is the author of "The Age of Sharing," which readers of Shareable can acquire with a 20 percent discount by using the discount code PY794 at the publisher's website. Follow him on Twitter at @NicholasAJohn. Header photo of the word "share" in the dictionary was taken by John.

Nicholas John is assistant professor at the Department of Communication at the Hebrew University of Jerusalem. He is the author of “The Age of Sharing." Follow Nicholas on Twitter at @NicholasAJohn.

Nicholas John is assistant professor at the Department of Communication at the Hebrew University of Jerusalem. He is the author of “The Age of Sharing." Follow Nicholas on Twitter at @NicholasAJohn.