A Revolution That Could Save Our Lives: The Walking Revolution - Shareable
Skip to content 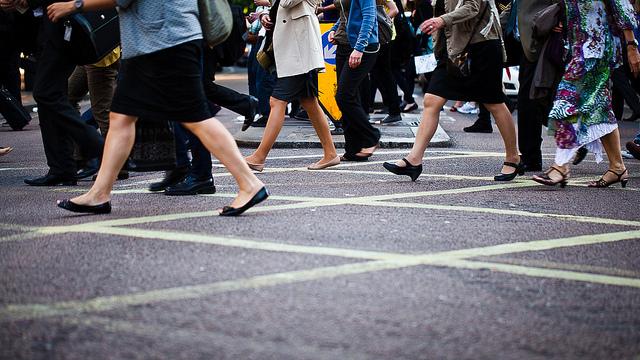 Photo by Miguel under a Creative Commons license from Flickr.

We all know that walking is important. Ask anyone. It’s arguably the easiest and cheapest form of low-impact exercise that gives us independence, strengthens communities, keeps our hearts strong, and puts our minds at ease. Yet despite these common-sense benefits, most Americans aren’t taking to the sidewalks.

Physical inactivity is in fact the biggest public health problem of the 21st century, says Steven Blair in The Walking Revolution, a new documentary put out by the Every Body Walk! campaign to (you guessed it) “get Americans up and moving.” Blair is a professor at the Arnold School of Public Health and one of many academics, healthcare professionals, non-profit workers, and government employees interviewed in the documentary. Taken together, their insights are startling: sedentary living is truly pandemic in the U.S., and it’s causing diseases like obesity, heart disease, high blood pressure, and diabetes to skyrocket.

American’s seem to like quick fixes, and if there were a pill that would reduce the risk of these health problems, one would think that many would take it. But JoAnn Mason, a doctor at Harvard Medical School, says that the “pill” actually does exist: “That magic potion really is available to everyone in the form of thirty minutes a day of brisk walking.” Our bodies are beautifully constructed for walking—the motion is hardwired—and physical activity is a more powerful health contributor than all the pharmaceuticals you can take, reaffirms Karim Khan, a doctor at the University of British Columbia. The challenge lies in getting up and doing it.

The benefits are clear, so why aren’t we walking? Of course it’s hard to say for sure, but because movement has literally been engineered out of our lives with the invention of TV remotes, escalators, elevators, Internet shopping, smartphone-controlled appliances, et cetera, we have fewer and fewer reasons to get up off the couch. What’s more, the automobile-centric infrastructure designed by urban planners in the '50s and '60s that made it nearly impossible to get around on foot is still in place in many cities.

The Every Body Walk! campaign believes we need to reverse this trend by creating better sidewalks and more opportunities for walking—and frankly, it’s hard to disagree. From my own observations, walkable communities are at once more healthy, vibrant, connected, and economically viable. Who wouldn’t want walking to be a core value of America?