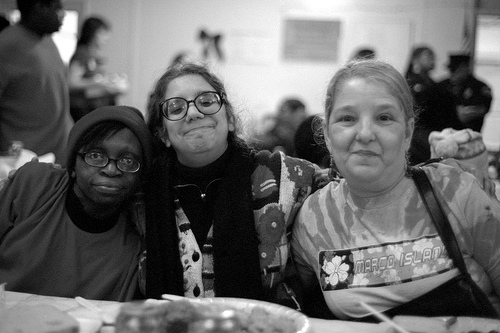 Here in the United States, we’ve recently celebrated Thanksgiving and Hannukah and are looking forward to Christmas, all of which are times when families gather together (parents, grandparents, siblings, aunts, uncles, cousins, close friends) for food, festivity and kinship. It’s the one time of the year when American domesticity expands beyond the narrow circle of the nuclear family of mom, dad and the kids—when we we embrace the spirit of the commons in our everyday lives, seeking opportunities to share with one another and shift a bit from “me” to “we."

It’s interesting to note that this familiar nuclear family has been the organizing principle of Western society only since the Industrial Revolution, and that in many parts of the world today a broader network of extended family and fellow villagers are still the primary social glue. I remember a Brazilian friend, who grew up middle-class in cosmopolitan Sao Paulo, telling me that he was a teenager before he was completely sure which people living in his house were blood relatives.

Margaret Mead, the most famous anthropologist of the 20th Century, once commented that, “Ninety-nine percent of the time humans have lived on this planet we’ve lived in tribes, groups of 12 to 36 people. Only during times of war, or what we have now, which is the psychological equivalent of war, does the nuclear family prevail, because it’s the most mobile unit that can ensure the survival of the species. But for the full flowering of the human spirit we need groups, tribes.”

The evolution of society into these smaller family units offers a freedom and flexibility unknown to our ancestors. Few of us today would want the details of our lives (from the time we awake in the morning to the person we marry) to be managed by a chief, priest or patriarch. Even the extended families that dominated the world of our grandparents or great-grandparents would seem stultifying.

Yet, if we looked deeply into our souls, many of us today might admit there is also something attractive about being an intimate part of a wider tribe. Even with our cherished freedom, there is something a bit lonely about our modern existence of tight little families living isolated in their privatized homes. Few of us know our neighbors in any meaningful way, and the rest of our family usually lives far away. When we encounter problems or simply are in a mood to celebrate, there are surprisingly few people to turn to.

Huge industries have arisen to meet the needs once take care of by grandma or the “uncle” next door who was not really related but you’d known him your entire life. This is classic case of commodification, making a product for sale out of a need that was once met by the commons. Many people today worry that this institutionalization of many basic human activities, from raising kids and caring for the sick to baking birthday cakes, carry a heavy price. This dependence on professional, for-profit services cuts us off from the rich web of personal relationships that have long sustained human culture.

Indeed, it can be argued that as a species we have been shaped through evolution to live as part of these sort of emotional ecosystems, and that the atomized patterns of modern society is one cause of today’s unprecedented levels of mental illness and senseless crime.

Few of us, however, are in any position to move back in with our grandparents. But a growing number of social pioneers are looking for other ways to enjoy both the stimulating possibilities of the modern world and the comfort of our communal heritage. This can be something as simple as neighbors sharing a potluck meal and an in-depth conversation on a weekly or monthly basis. Many groups, such as single-parent or gay and lesbian families or home-schoolers, are banding together in new kinds of family networks, sharing time and tasks on a regular basis, and being there for one another in a way that goes beyond the usual parameters of friendship. But there’s no reason that other families can do the same.

Co-housing communities, an updating of the commune movement of the 1960s, represents an even bigger step in forging a new kind of extended family not based on blood. Well-established in Northern Europe and now taking roots in North America, these are communities of people who have chosen to live together and share some elements of their daily lives, recreating in a conscious way what happens naturally in traditional villages as means of survival. There are more than 100 co-housing developments built or under development in 34 states and three Canadian provinces, part of a growing world-wide phenomenon in Europe, England, Japan, Australia and New Zealand.

There’s great latitude in how communal these communities want to be, with some that share meals every evening while others that simply have a common space like a clubhouse where neighbors can interact both spontaneously and in regularly scheduled events that offer a satisfying sense of belonging.

All these experiments in creating a new kind of family are important steps toward restoring the commons and bringing a greater sense of “we” into modern life. And given the stormy economic forecast, they are also very important for helping people remain healthy, happy and hopeful in the days ahead.

A different version of this essay was originally published at On the Commons, a network of citizens and organizations exploring new ways to achieve social justice, environmental harmony and democratic participation at all levels of society.