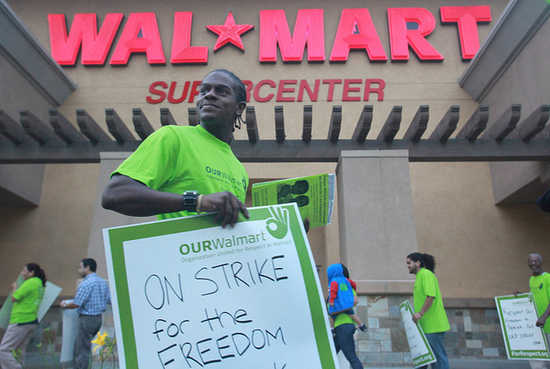 Walmart is the largest private employer in the world. As such, its labor practices have a disproportionate effect on retail workers worldwide: not only because more than two million employees are effected directly by its policies, but because where Walmart goes, much of the retail world goes too. That’s bad news, because Walmart workers are usually paid less than a living wage: as much as 80% of Walmart workers collect food stamps, and a large percentage are on Medicaid. And in many communities, where Walmart is the main source of groceries and pharmacy, well, that government money goes right back into Walmart coffers.

How can workers fight back against this massive company? They are not unionized, and it looks like Walmart workers are not planning to form a union. Instead, they’ve been organizing small actions with community support. The biggest day of actions occurred on Black Friday, when hundreds of Walmart workers walked off the job. Many were members of a year and half old coalition called OUR Walmart. Black Friday strikers were fighting against illegal retaliation in Walmart stores that was being brought against any sort of political action. But the workers were distributed throughout the country, how did the strike work?

What does it mean to strike as an individual or as a minority of your workforce? How can one person, two people go on strike in a workplace? Traditionally, this would be impossible. But with a combination of social media organizing and bottom up driven press coverage, Walmart strikers did just that.

Most Walmarts where there were strikers more than a couple workers went on strike, although no single Walmart was shut down because all the workers left their jobs. Still, the strike garnered headlines and was supported by outpourings of community solidarity. There were over 1000 protests across the country, with actions in all but four states.

Traditionally, labor struggles emerge from the workforce, with other unions and family members giving support only when they have achieved a certain level of intensity. But the Walmart strike looked very different, like something new: community supporters outnumbered workers, and solidarity and protests were organized over the web with people who don’t necessarily work at Walmart (although workers took the lead on many of the protests).

The availability of distributed networks of solidarity and bottom-up media distribution, combined with the newfound sense of organization brought about by Occupy, points to a new way for labor struggles to unfold: not as workers alone in their workplace or their unions, but supported by a tremendous number of people from the community who can join them and spread their message.