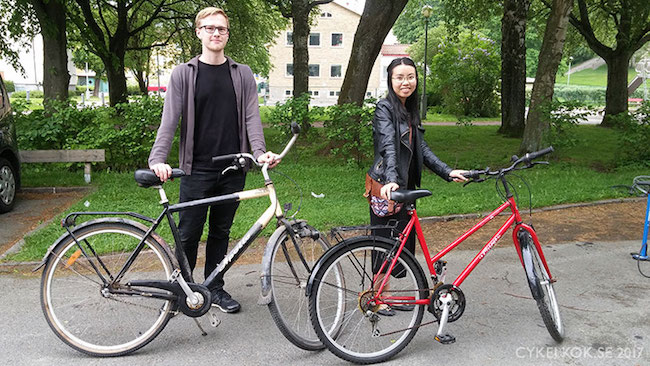 Earlier this year, Gothenburg — the second biggest city in Sweden — was voted as the world’s “most sociable city.” This reflects the typical culture of our city. We love to hang out in parks, cafés, bars, and other spaces. But Gothenburg, with it’s almost 600,000 residents, also has some serious challenges. The city is one of the most segregated in Europe and is dependent on the fossil industry. At the same time, we’re seeing initiatives that promote sharing and collaboration growing stronger and stronger.

We had planned to write this piece at our co-writer Robin Olsson’s cafe Llama Lloyd, where he promotes sharing and biking, but the weather was so nice that we decided to relocate outdoors to Jubileumsparken, a wonderful public space the city has set up in the industrial part of Gothenburg called Frihamnen. Surrounded by a makerspace, a community garden, a boule court, an open sauna, a communal pool, and a book swapping booth, we felt this was the perfect place to work on this piece.

As we were writing, people stopped by to chat about the collaborative movement and the newly opened makerspace where you can learn 3D-printing, among other things. This is the essence of what’s going on in Gothenburg — community connections. Here are some of our stories: 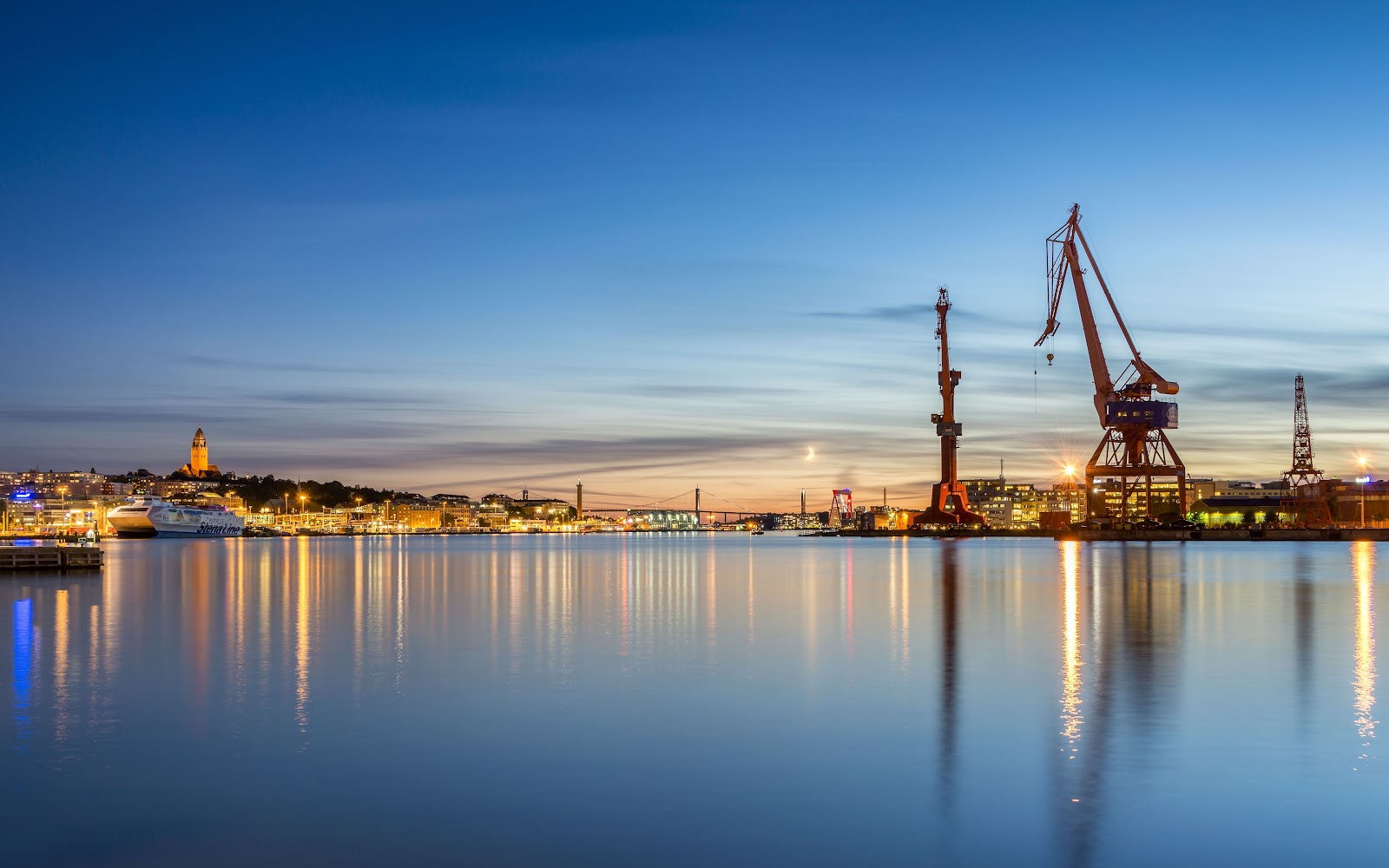 Who are we? The writers of this piece are the core of the nonprofit organization “Kollaborativ Ekonomi Göteborg.” We are people who believe in the collaborative society — together, with our members and our network, we enable the collaborative movement locally.  Since 2014, we’ve been promoting the collaborative economy in the city through projects, events, and lobbying. We’ve been organizing events like Global Sharing Week GBG and Mapjams. We facilitate the Facebook group with the same name, which has become the local forum for the movement. Since November 2016, we’ve been responsible for the website and digital map “Smarta Kartan.” 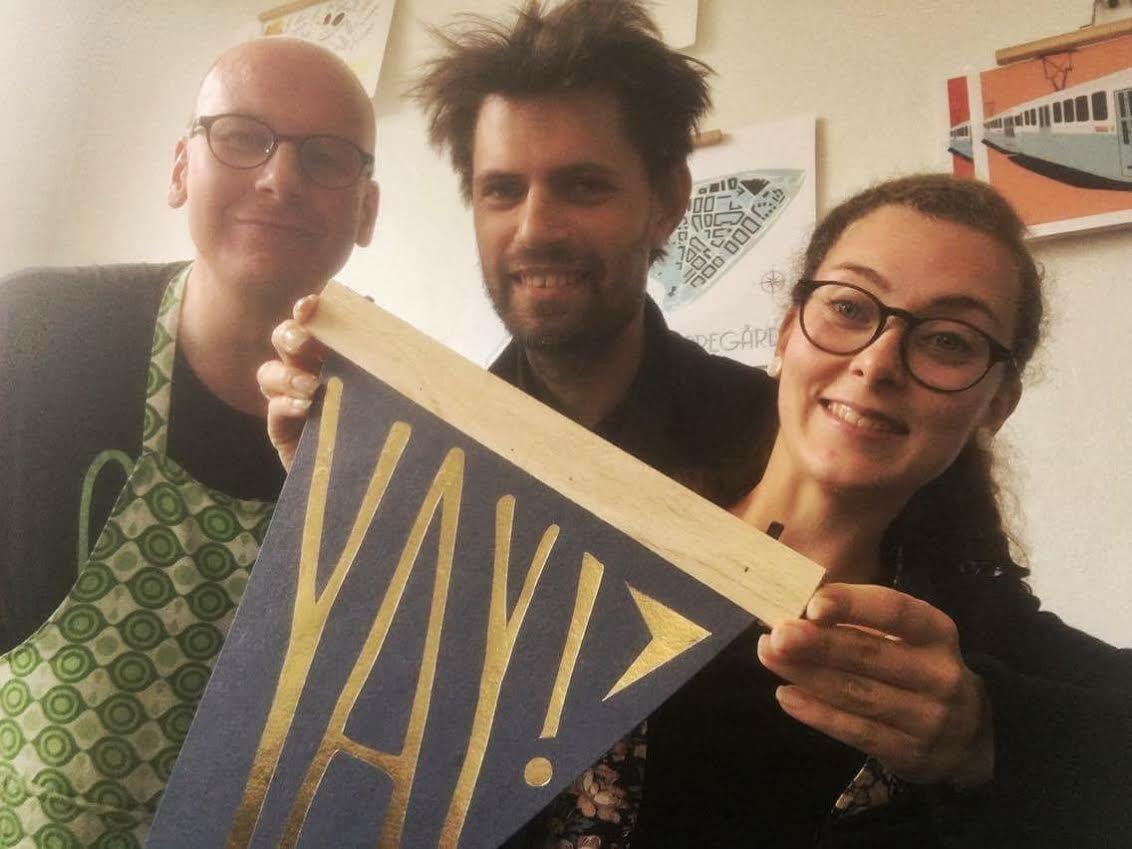 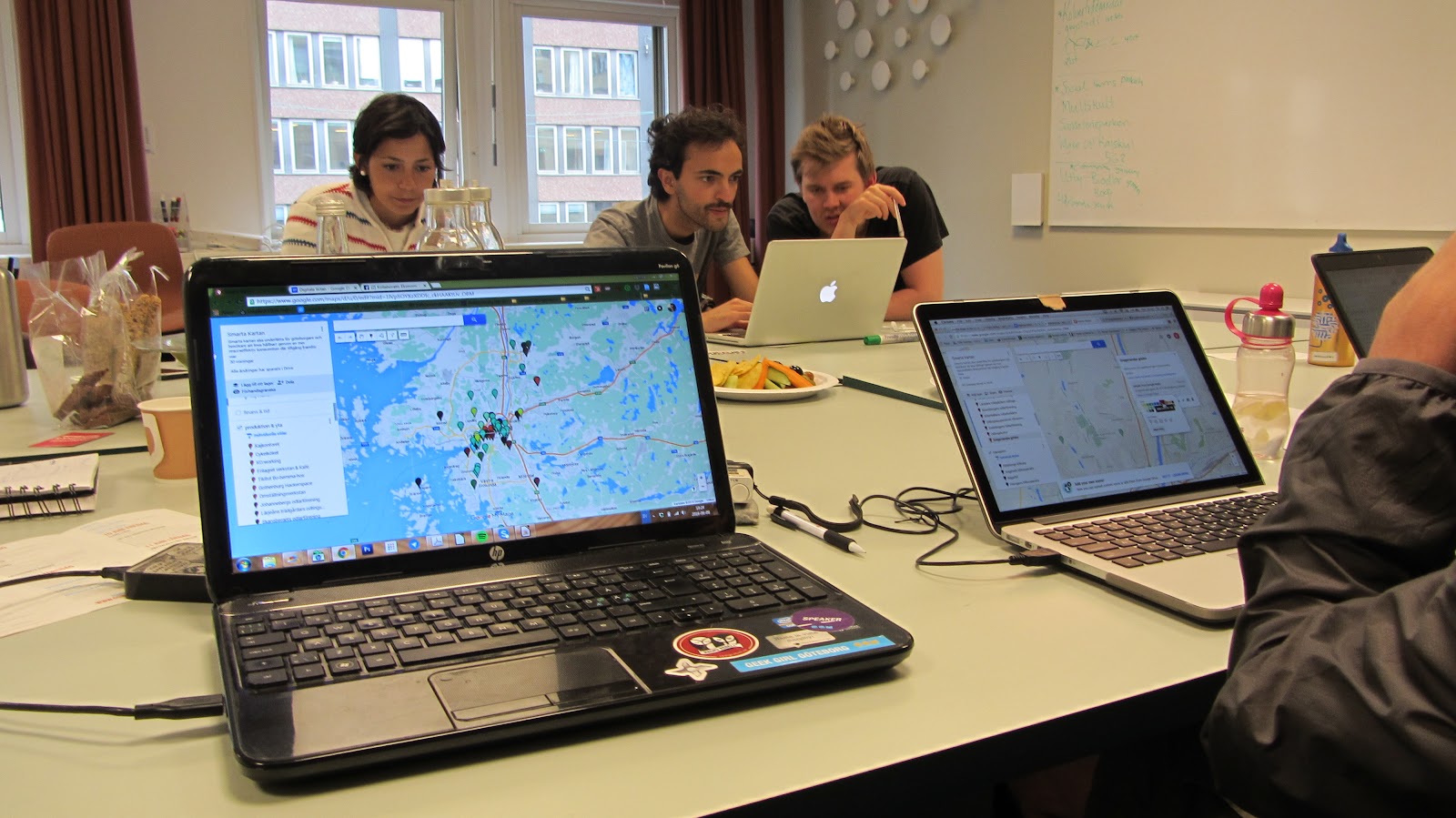 The creation of Smarta Kartan started with Shareable’s Mapjam event in 2014, in which we collaboratively plotted out all the sharing projects in the city on a Google map. In 2016, we joined forces with the City of Gothenburg, which saw this resource as a great way to promote a sustainable lifestyle. Later that year, we launched the website and digital map showing more than a hundred sharing initiatives where you can rent, borrow, share, swap, and give in Gothenburg.

The map is mainly run by Kollaborativ Ekonomi Göteborg, but a joint partnership between the organization and the local government in 2016 has helped it reach new levels. The goal is to make the map open source later this year. The mapping project has become far more important than we imagined. The map is an easy way to show the many initiatives and promote them in an effective way. In a recent study, nine percent of the inhabitants of Gothenburg said they knew about the map — six months after its launch. 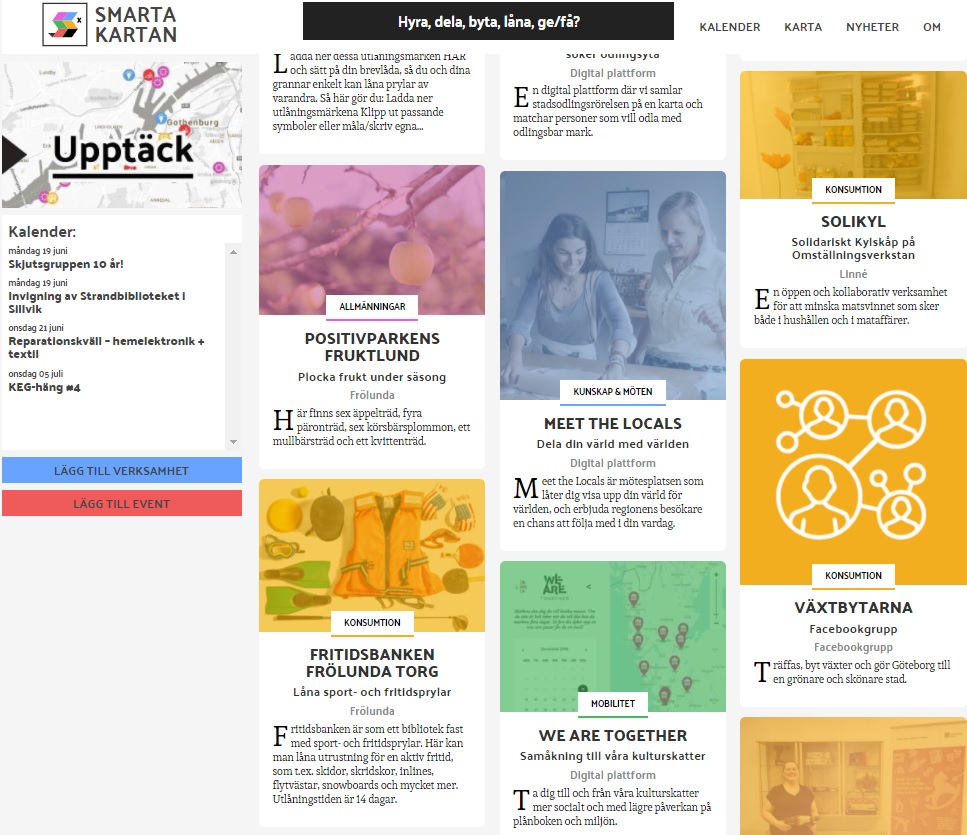 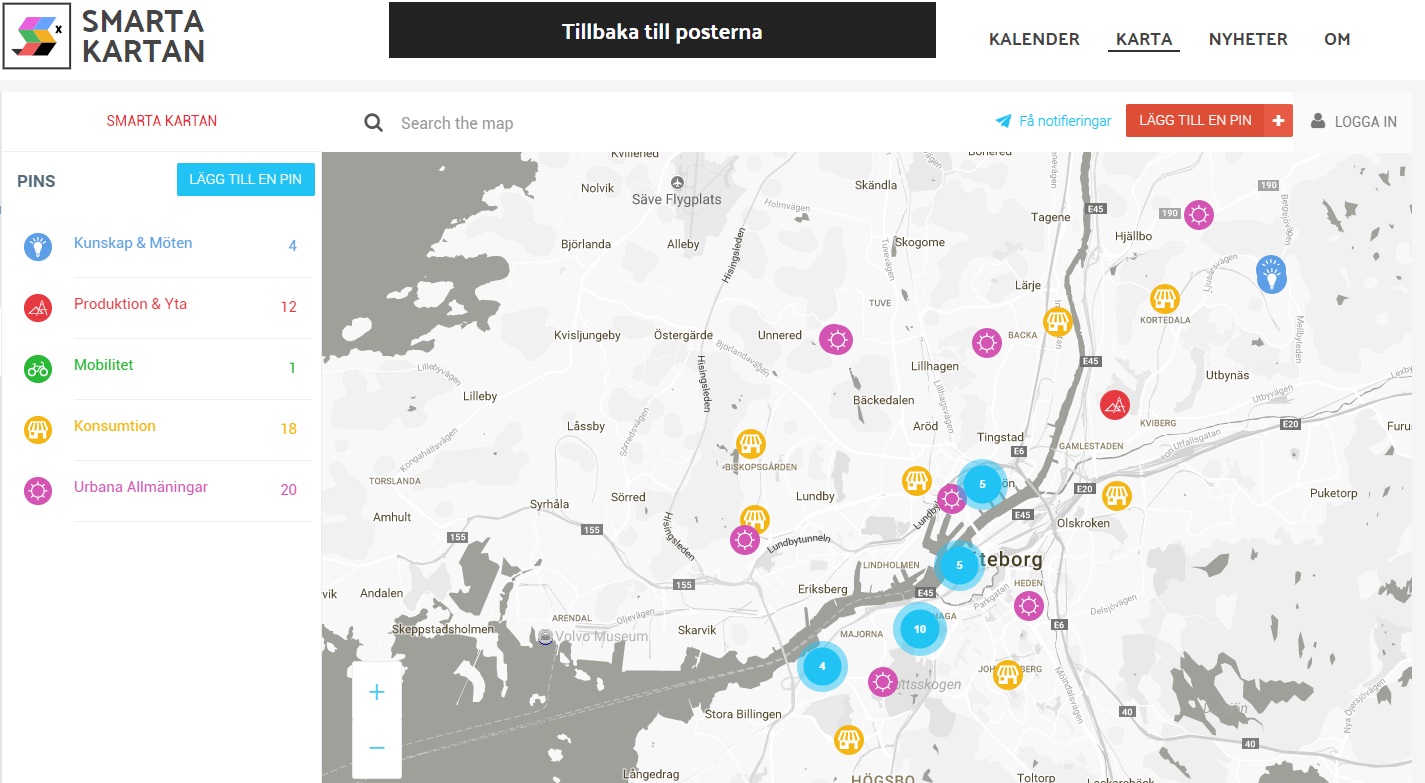 Have you ever been to a Bike Kitchen? It’s an open do-it-yourself workshop, where you can fix and repair bikes. You get access to tools and the space. You also get help from other participants to fix your bike. So far Gothenburg has two bike kitchens and more are on the way. In collaboration with these grassroots projects, the City of Gothenburg is trying to find ways to enable the creation of even more Bike Kitchens. The City of Gothenburg also runs its own workshops for people to learn how to repair bikes. Members of Bike Kitchens can also get a bike every year as part of their membership. These bikes are mostly donated by housing corporations. 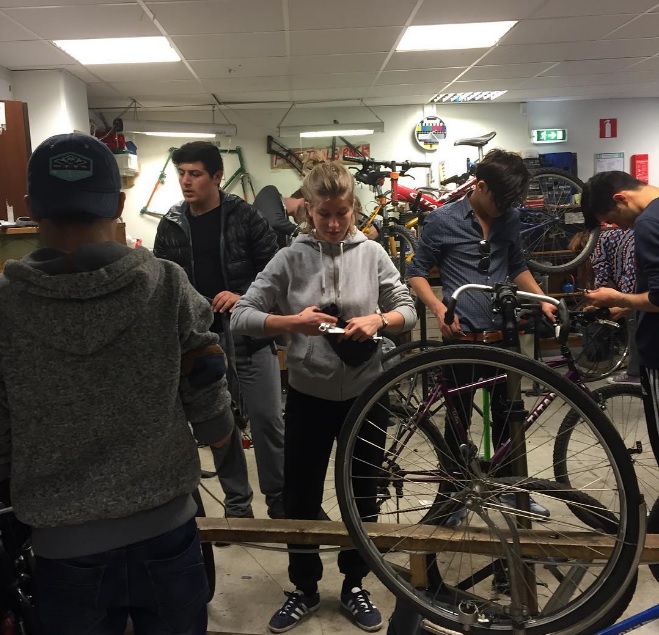 People fixing bikes at the Bike Kitchen at Omställningsverkstan

You can find many different ways to find stuff or find someone who is in need of your unwanted stuff. In Gothenburg, there are three free shops — often found in unused spaces owned by housing corporations or other organizations that give free access to rooms. In the city you will also find three places to borrow sport and leisure equipment called “Fritidsbanken.” People donate their used equipment there, and Fritidsbanken lets anyone borrow them for free for 14 days. And of course, we have many Facebook groups and digital platforms that enable people to swap, borrow, and give stuff.

Tired of owning your clothes? Pop by our dear friends at “Klädoteket” and rent fashionable, locally and ethically-made outfits. If you have kids, you can visit one of the toy swapping-events organized by the City of Gothenburg, in collaboration with the foundation “Retoy.” 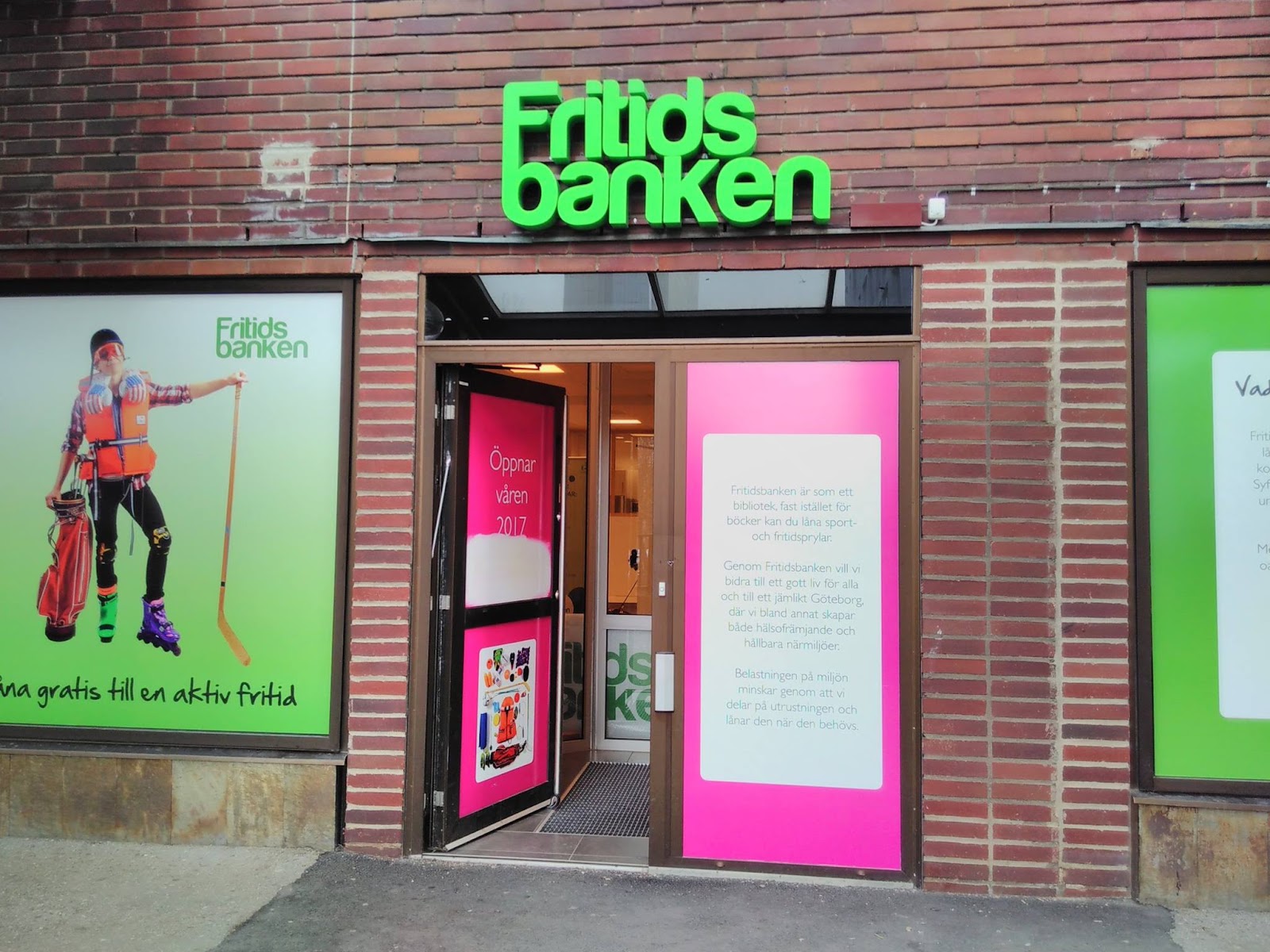 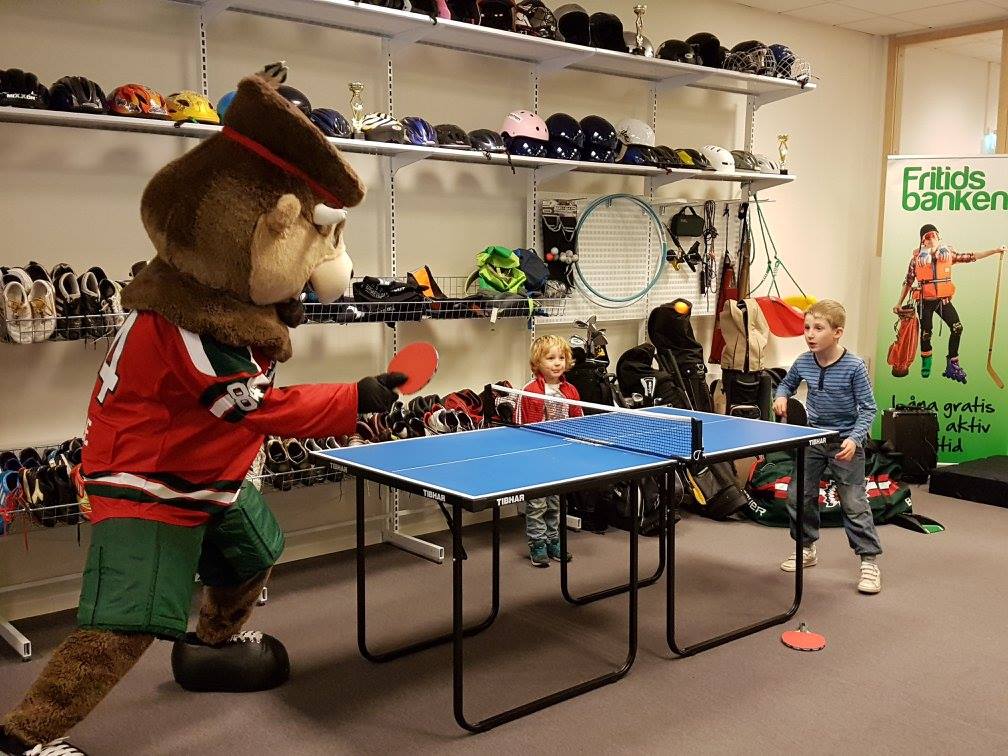 Skjutsgruppen started in June 2007 as an idea. The idea was that private individuals can bridge both physical distances and distances between each other as human beings by sharing vehicles. Thousands of individuals connected to the name “Skjutsgruppen” before it was even formed as a nonprofit. At that time, Skjutsgruppen was not a company, organization, or state initiative. “We’re 70,000 friends and friends of friends who share vehicles together when we are going the same direction. We share the costs of our rides equally or offer rides for free, because friends don’t make money off friends,” the group’s founder Mattias Jägerskogs says. In 2013, municipalities and counties reached out and wanted to cooperate with the ride-sharing movement. Because of this, the nonprofit association Skjutsgruppen was founded as an “enabler” for the movement, and all who participated in the movement became members of the association. Currently the association has developed a ridesharing app in English together with the regional government of West Sweden. 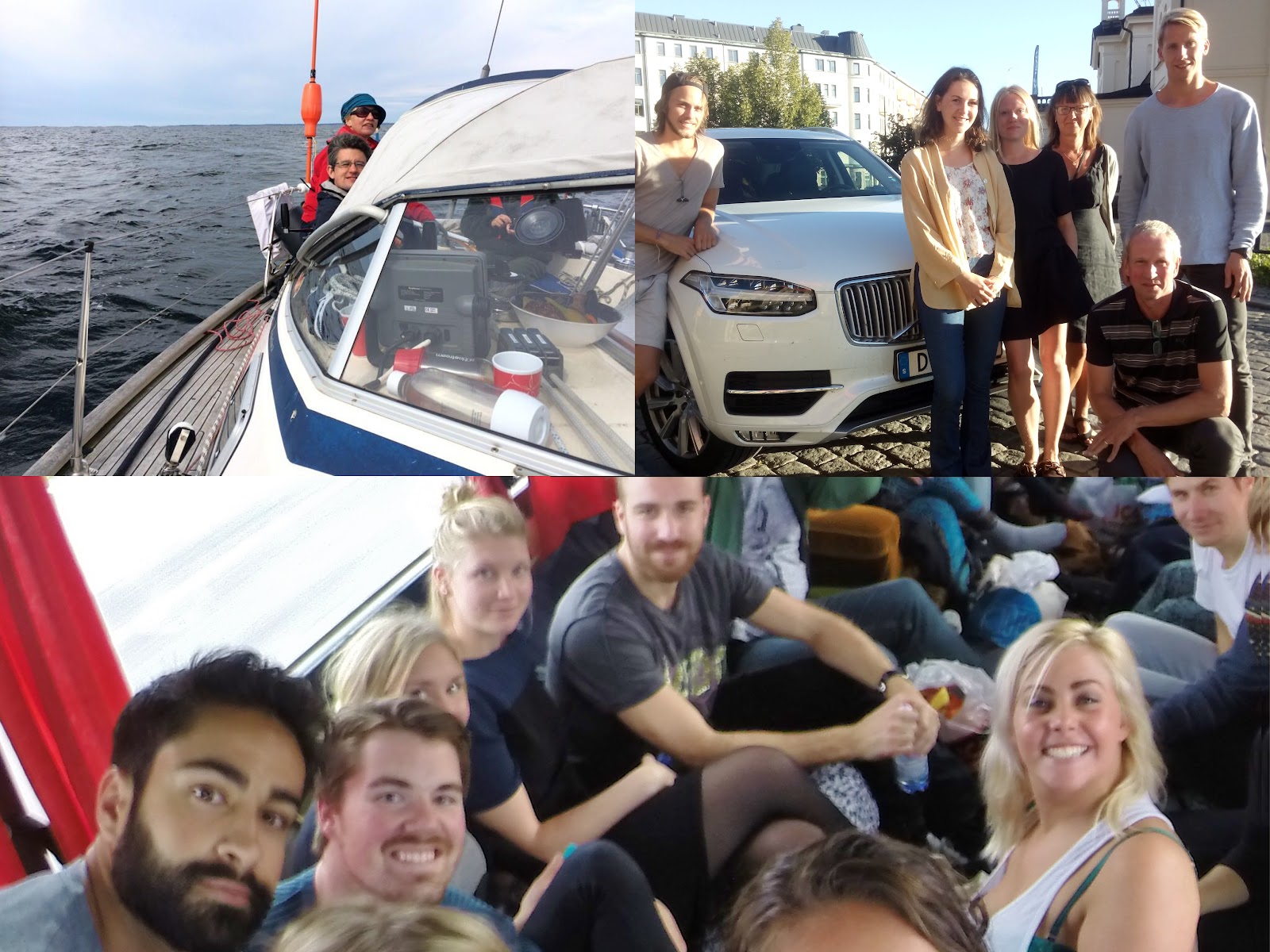 People ridesharing by boat, bus, and car, facilitated by ​Skjutsgruppen

Want to meet locals? Want to try a typical Swedish fika or meet a Swedish family? On the platform “Meet the Locals,” you can meet local residents who will make dinner for you or show you the best places in the city. This platform — launched this spring — is run by the West Sweden Tourist Board, with the aim of making visitors and locals meet in person.

If you want to see something other than the city center, we would recommend the organization “Tikitut — community-based-tourism,” which organizes activities in the north east part of the city where you can meet local residents and eat Assyrian, Kenyan, Somali, and Kurdish food. 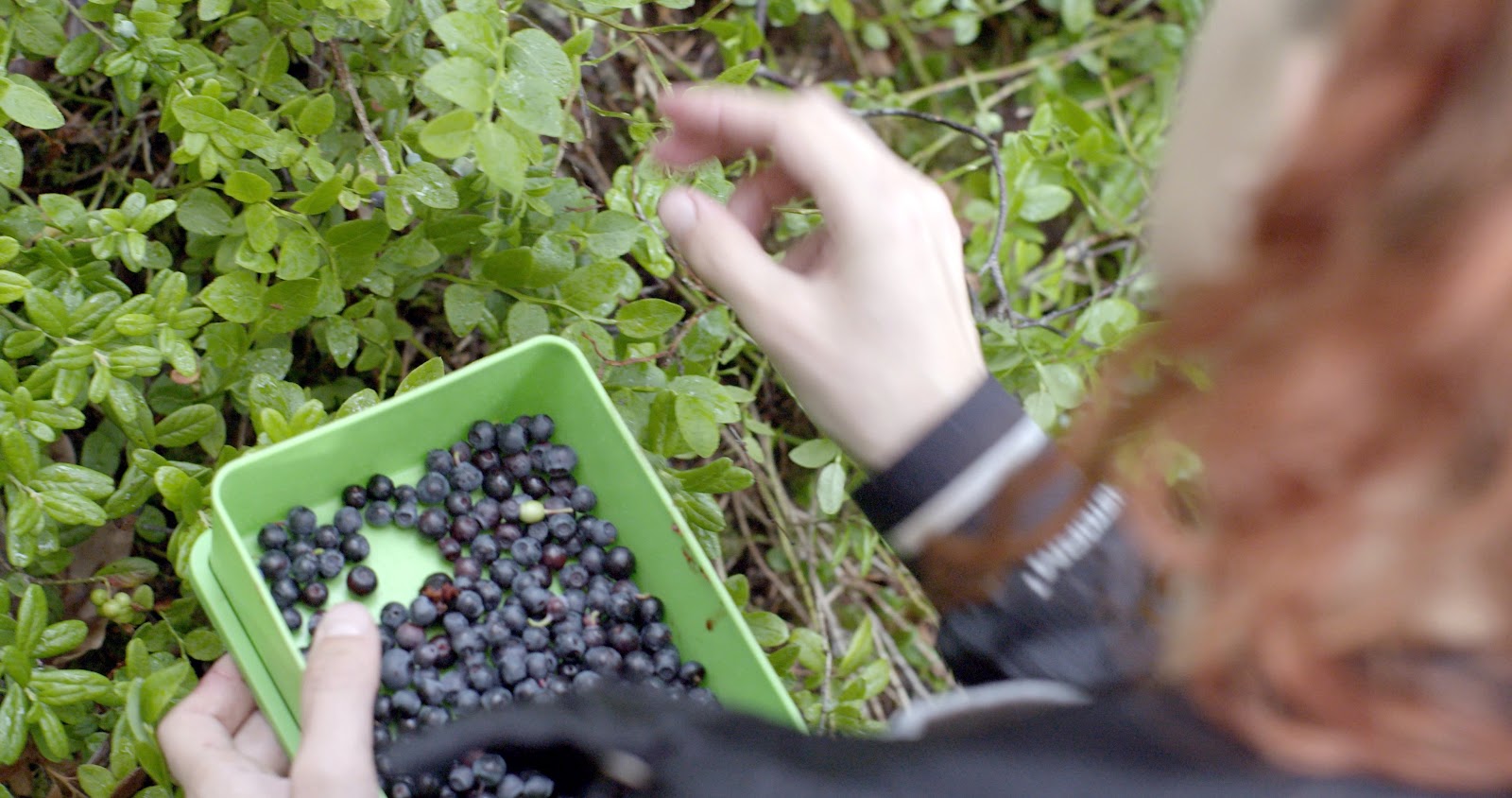 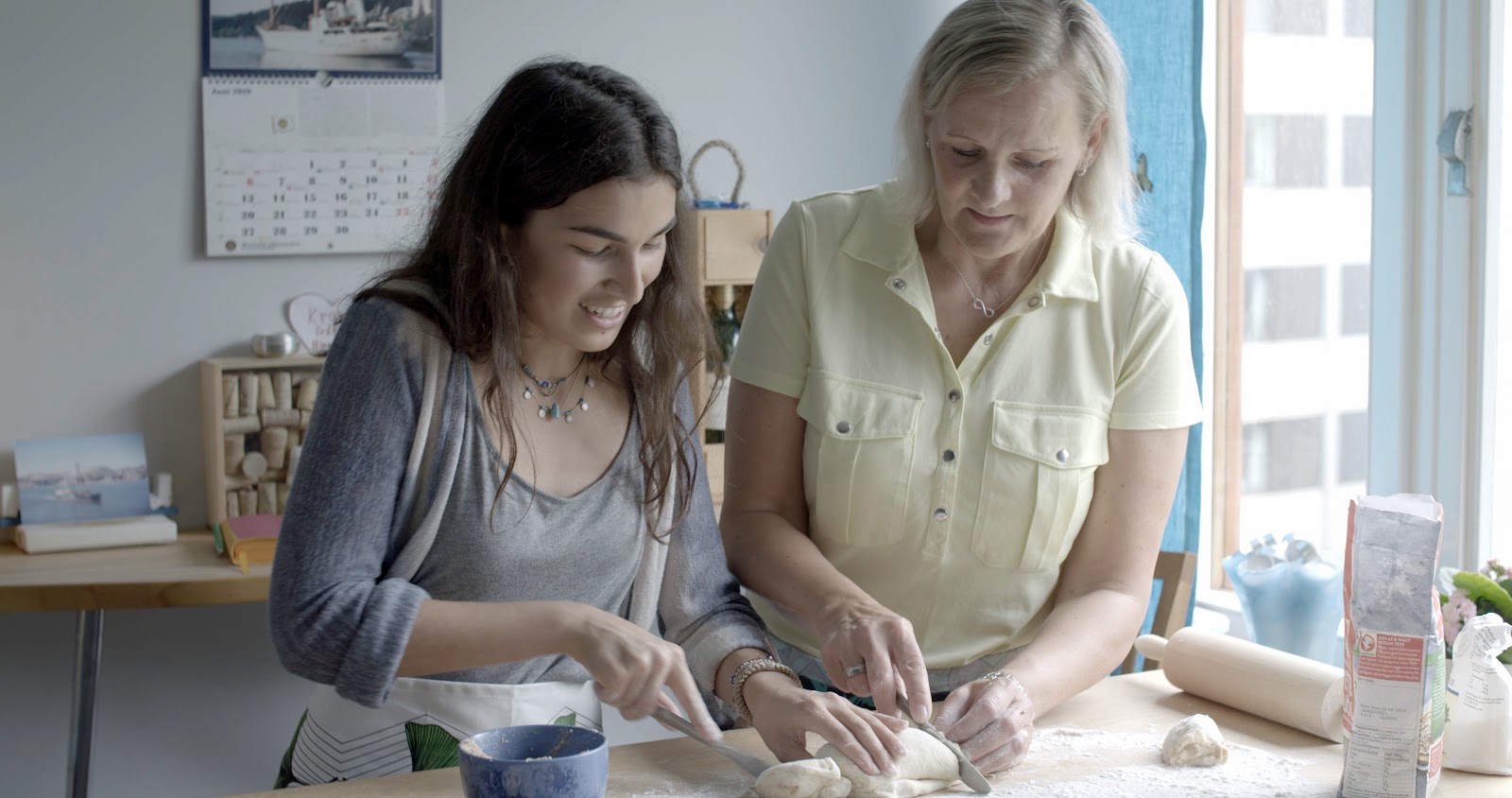 The maker and repair movements are thriving in Gothenburg.The Facebook page “GBG Make” helps you find events and tool libraries like “Mikrofabriken,” where you get access to a number of tools such as CNC-mills, welders, and laser cutters. If you are not a member, you are still welcome to use the space on Mondays.

Recently Sweden got its first Repair Café in Gothenburg called “Repair Café GBG.” You can bring your broken home electronic items and textiles and the volunteers will help you to repair your own stuff. You will find the Repair Café GBG at “Omställningsverkstan” (the Transition Workshop), where you also find “Cykelköket,” the “Gothenburg Hackerspace,” and the first Solidarity Fridge (more on this below). Every Sunday you can attend events on various topics like 3D printing and design. Why not learn how to print spare parts for something that’s broken? Omställningsverkstan is run by the nonprofit Studiefrämjandet, which enables free and voluntary skill-sharing (the Nordic tradition “folkbildning”) and receives government funding. 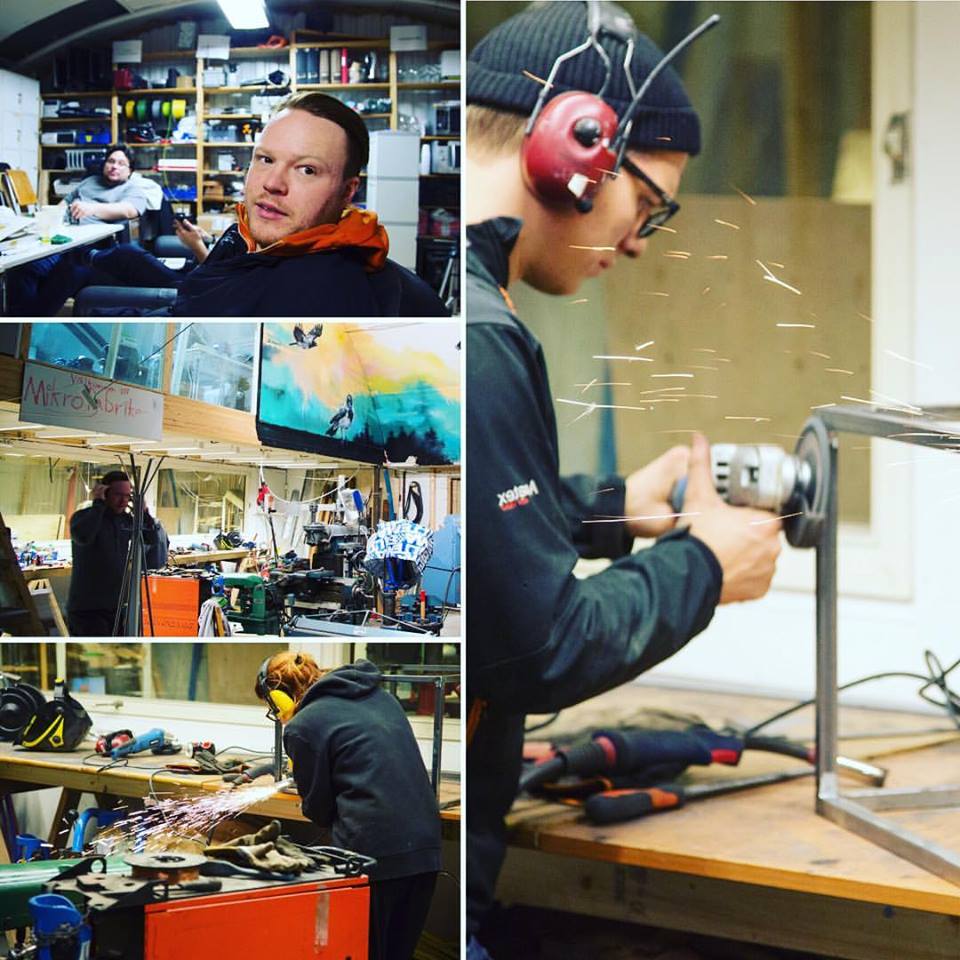 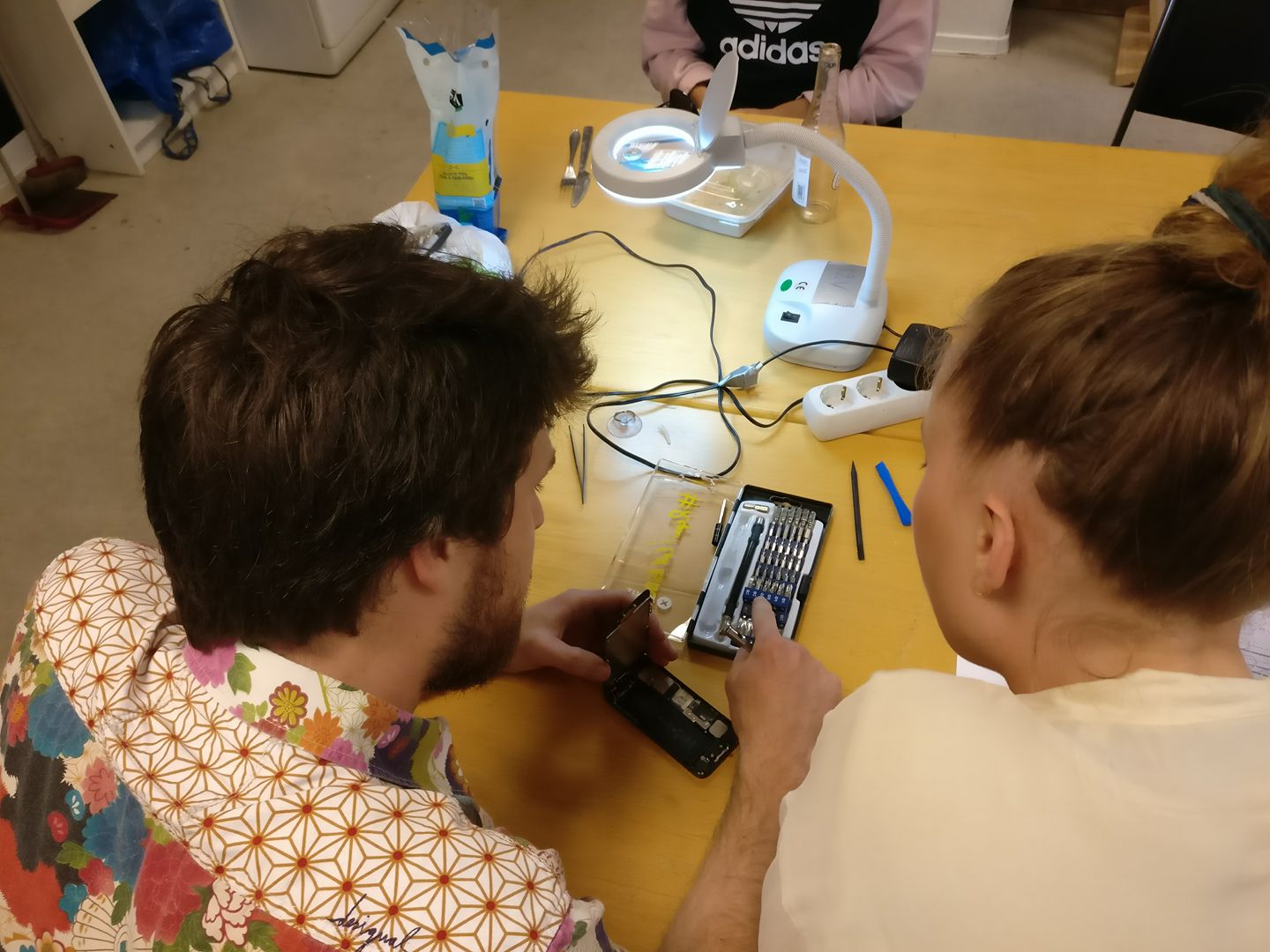 Earlier this year, the platform Grow Gothenburg was launched. The platform matches people with unused land with people looking for land. The project is a collaboration between the architectural organization The Foodprint LAB and the City of Gothenburg. Last year, we also saw some Community-supported agriculture (CSA) farms supported by the Western Sweden municipality. These urban gardens are everywhere, and new ones are popping up in various neighborhoods in the city. 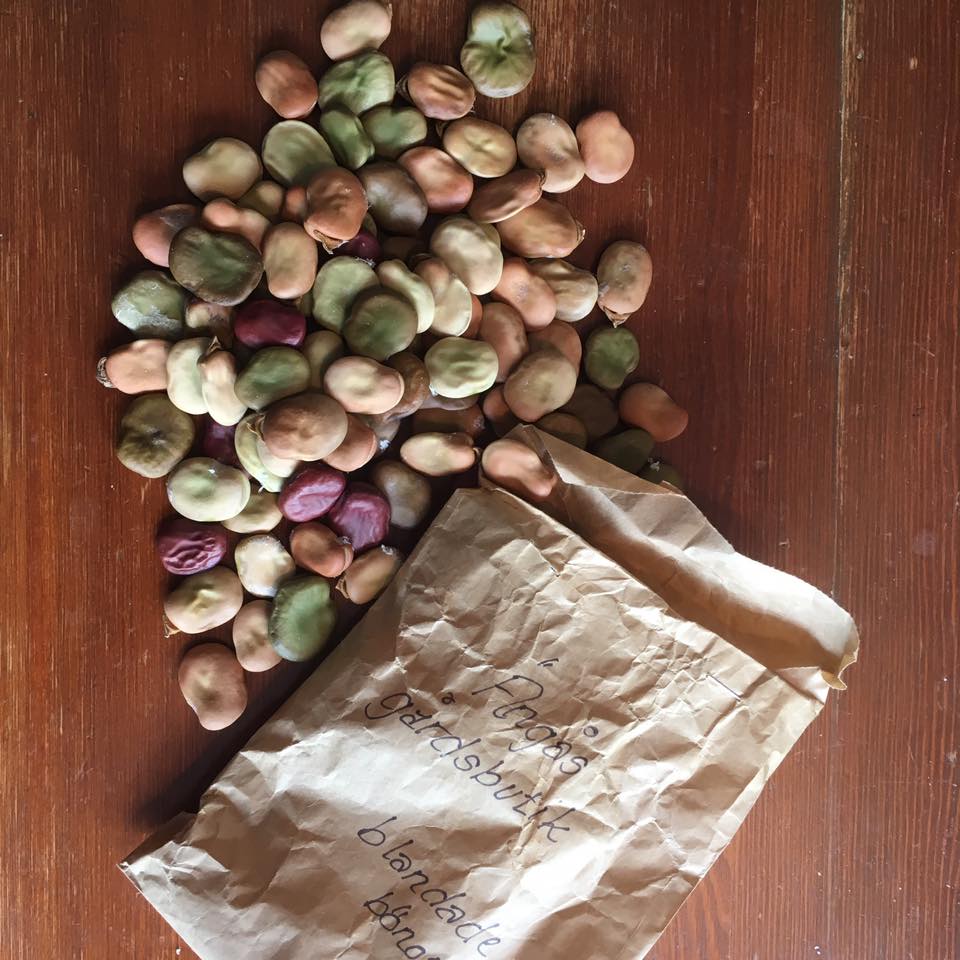 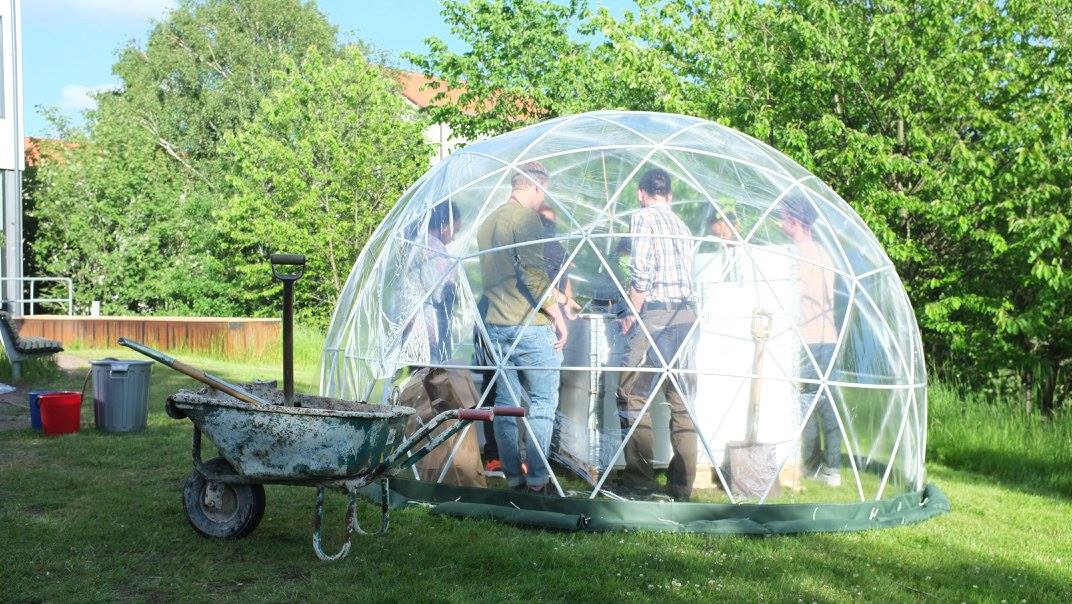 We mentioned the community gardens and CSAs, but what about the food waste? Have you ever heard of solidarity fridges? These fridges are open to anyone who wants to share leftover food. There are three solidarity fridges in Gothenburg. Cafes and grocery stores also contribute their unused food to the solidarity fridge. The same organization is working on making the platform “Yunity” available in Gothenburg to match unused resources with people who need them. And then of course there are numerous swapping events. Every spring hundreds of people meet for Seed Swapping Day at the Botanical Garden. 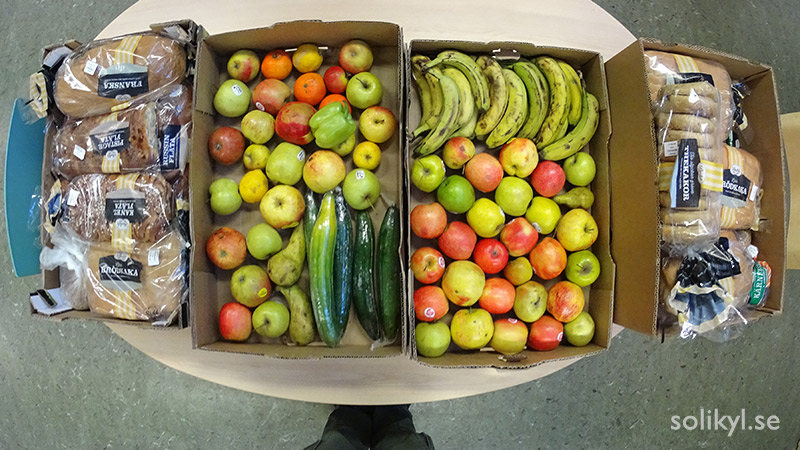 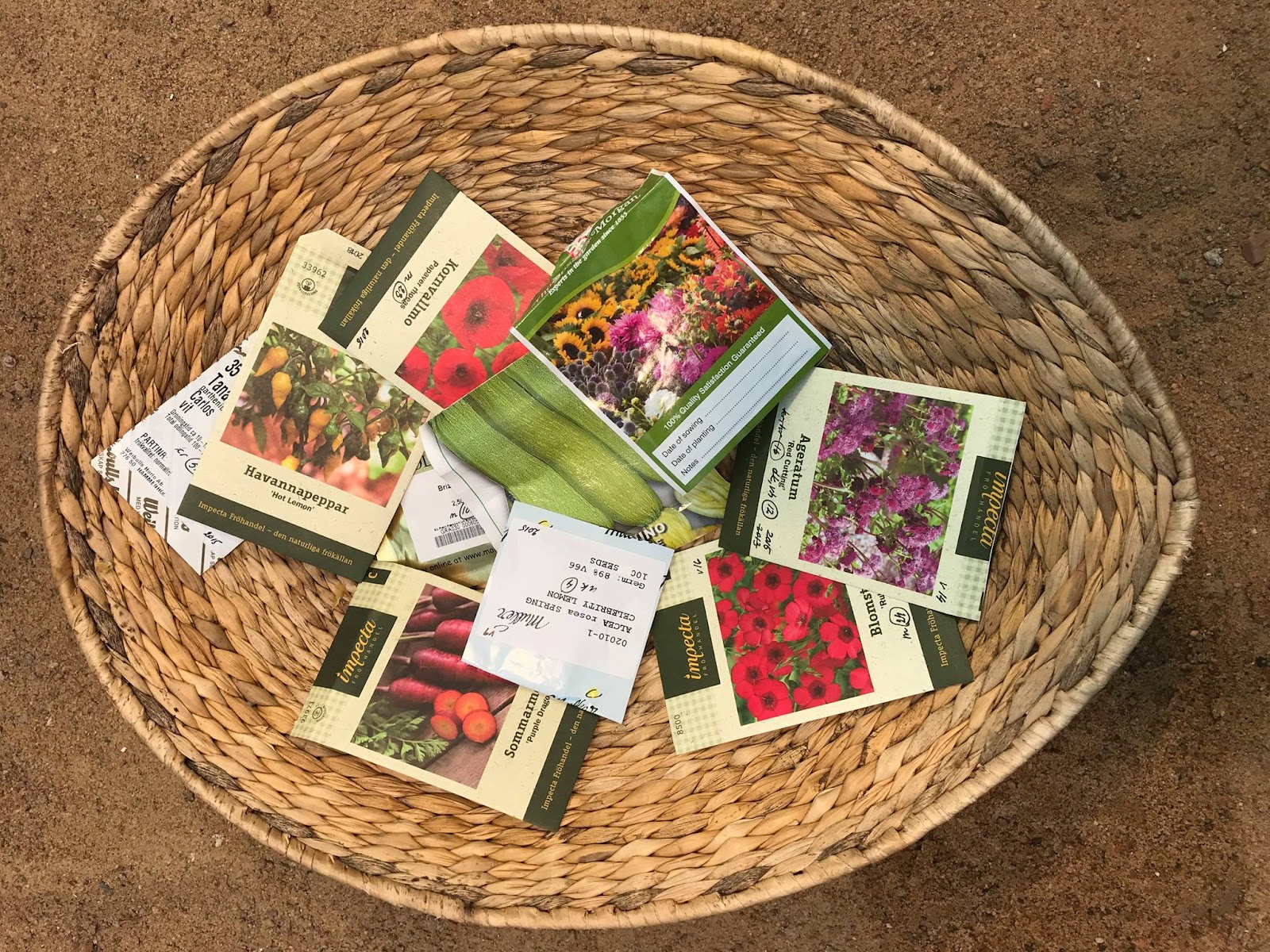 Food for the Solidarity Fridge and seeds ready to be swapped

There are many community spaces in Gothenburg. One is Jubilee park, a temporary space for the upcoming 400-year anniversary of Gothenburg — in 2021. The common sauna in the park is open all year round for a few nights each week. It has become a meeting point for local residents. It’s a wonderful space with an amazing view of the harbor. The common pool is open in the summer.

Throughout the city there are several fruit orchards in public parks that are open and free for everyone to enjoy and eat at harvest time. If you find fruit on common land somewhere in the city you can put it on the Fruit Map, “Fruktkartan,” to help others find it too. 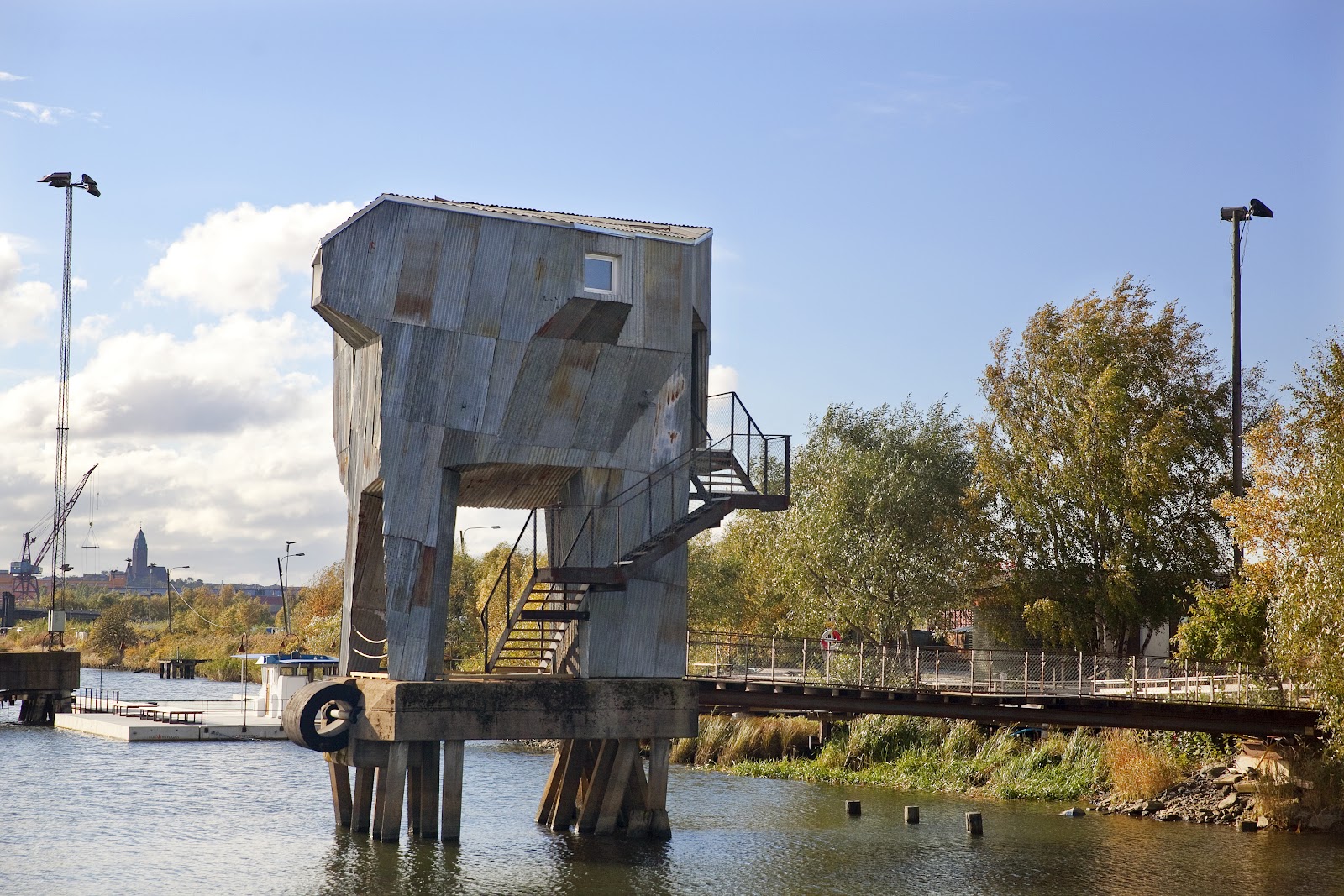 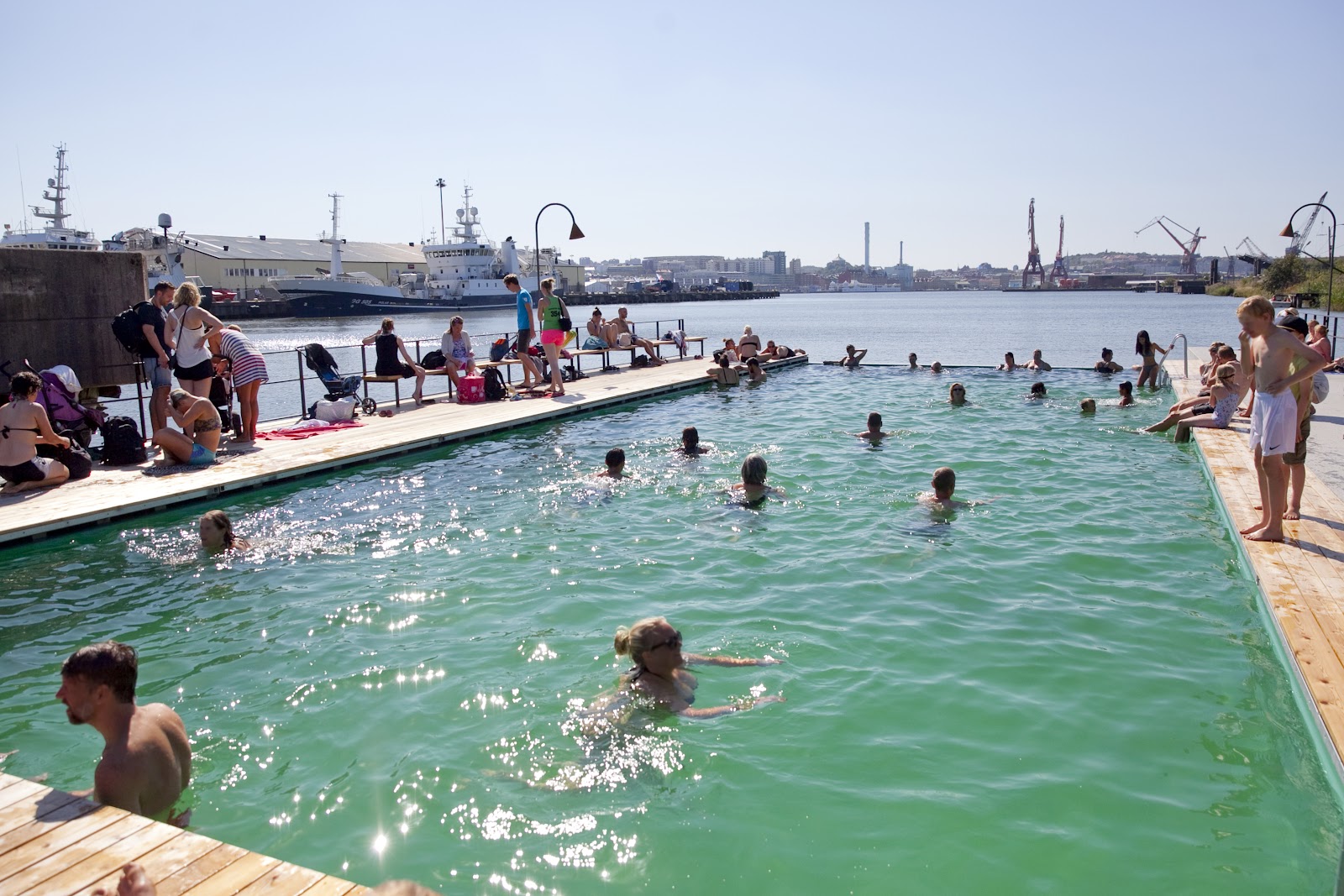 The Common Sauna and the common pool, photos by Beatrice Törnros/ Göteborg & Co

The library. Is there anything more collaborative? Owned by the people, for the people. Why limit this wonderful service merely to books? At public libraries throughout the city you can borrow board games, walking sticks, sewing machines, or even electric bikes, thanks to the “DelaMera” (ShareMore) project. We also notice libraries getting interested in makerspaces and we predict that we will soon see makerspaces at local libraries.

Since 2015, the local government in Gothenburg has officially promoted the real sharing economy. It is stated in the city budget that the “sharing economy, building on circular principles and trust” should be enabled by the city. As far as we know, this is the only city in Sweden that highlights this in its budget. In the budget for 2018, there are specific goals outlined to create more Bike Kitchens.

In practice, Gothenburg is already a full-fledged Sharing City, and we hope to see a political decision supporting this too. The city government provides a participatory voting system, open for every citizen to propose changes and solutions. If the proposal gets more than 200 votes, it will be brought to the relevant political committee. Currently a proposal to make Gothenburg an official Sharing City has received well above the necessary 200 votes Let’s hope for a good outcome. Stay tuned! 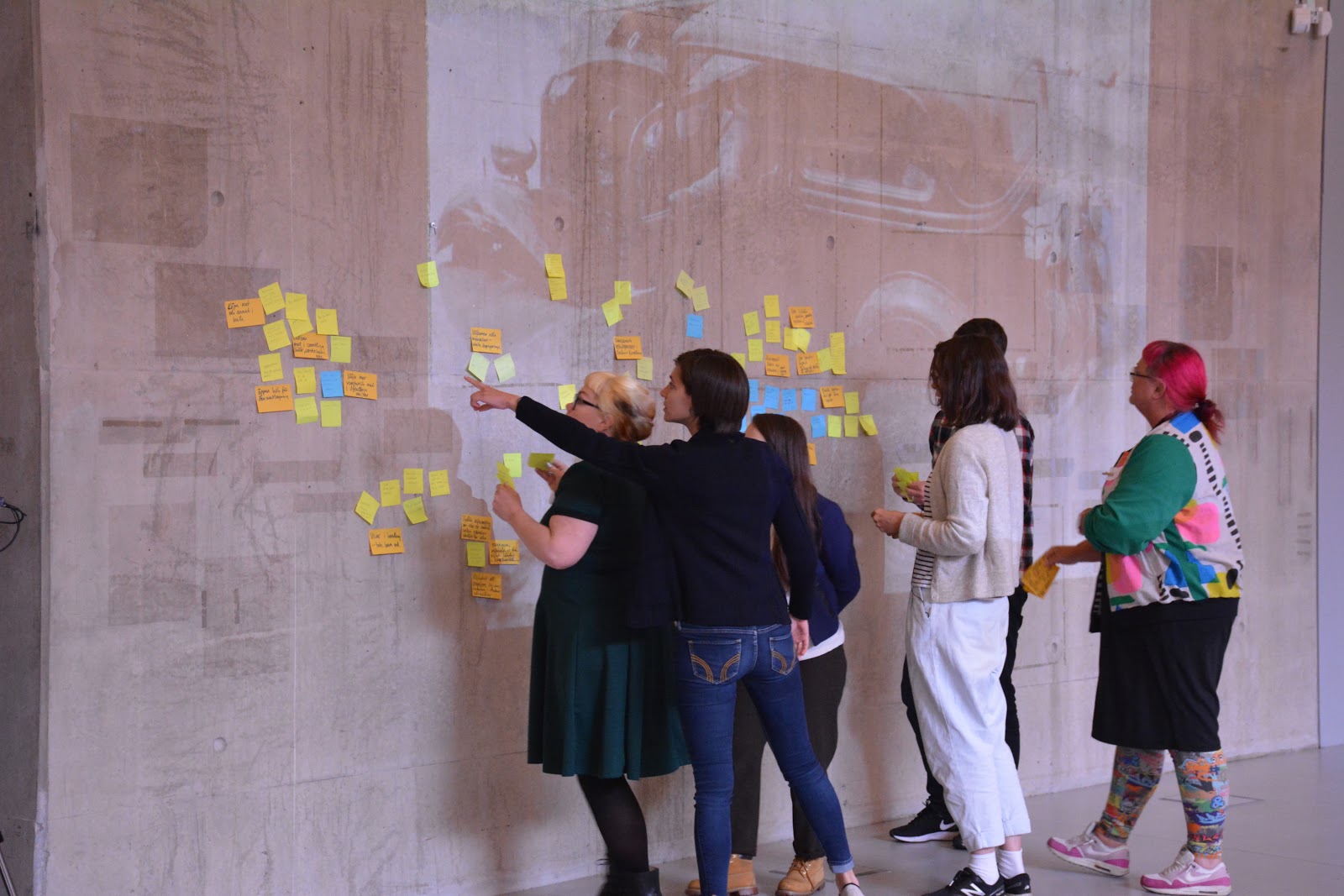 Kollaborativ Ekonomi Göteborg (KEG), Collaborative Economy Gothenburg is a non profit organization, located in Sweden. It was born during Global Sharing Day 2014, and have become one of the top

Kollaborativ Ekonomi Göteborg (KEG), Collaborative Economy Gothenburg is a non profit organization, located in Sweden. It was born during Global Sharing Day 2014, and have become one of the top influencers in Sweden. Through events, projects and lobbying they enable the collaborative economy and work closely with the movement and the municipality. Driven by Emma Öhrwall, Jonathan Mattebo Persson and Robin Olsson, together with the local community.