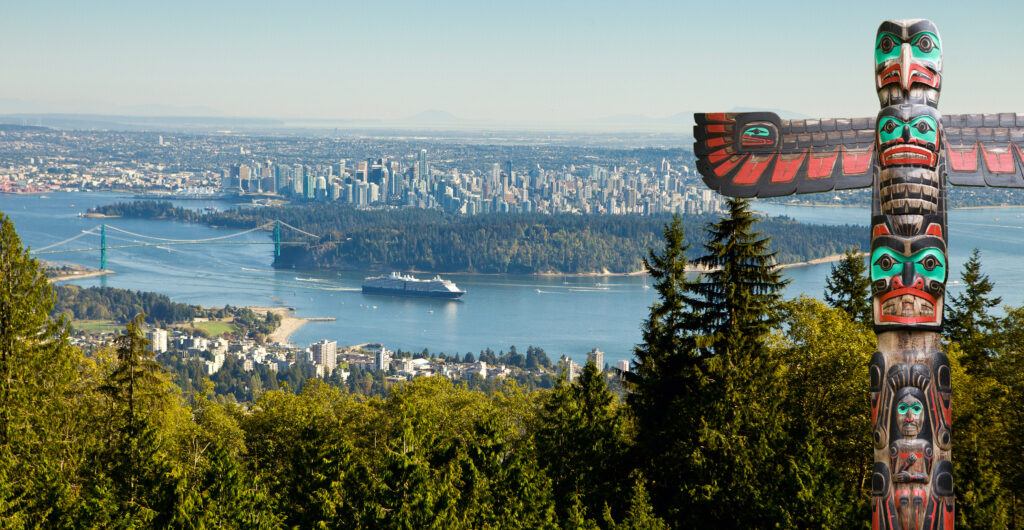 In Vancouver a new type of Indigenous community is emerging — one that builds resilience, health, creativity, and culture through shared housing and local, Indigenous leadership.

“People have a hard time seeing themselves as creative people without ‘the basics’,” said Mike Alexander, a Vancouver-based Indigenous artist. Having access to secure housing, personal safety, and resources that other people take for granted, he said, “makes it easier to “step outside yourself and see the world through a creative lens.”

Alexander, an Anishinaabe from Swan Lake First Nation in Manitoba, is in residence at Skwachàys Lodge, an innovative social enterprise where hotel rooms subsidize rent for artists who sell their art in the hotel gift shop. He grew up in Winnipeg and now calls Vancouver’s Downtown Eastside home thanks to this residency program.

Caroline Phelps, Artist In Residence Program Coordinator and Cultural Liaison Lead at Skwachàys Lodge, said that subsidized housing through the residency program is a form of cultural preservation. “We’re helping them to keep our culture alive,” she said, “by looking through their artistic lens of what they see and what they’re creating.”

Since opening in 2014, 110 artists have completed a residency. Among them are Kwakwakaʼwakw and Coast Salish artist Maynard Johnny Jr., whose designs are going to be on BC Ferries; Justin Rain, a Plains Cree actor who was on “Fear the Walking Dead”; Secwépemc actress and director Grace Dove; and Peter Chapman First Nation painter Jerry Whitehead.

Lu’ma Native Housing Society’s Children’s Village is another example of a housing program in the greater Vancouver area that integrates an Indigenous cultural worldview.  The project was designed to support Indigenous children in foster care and provide them with stability. One of the features that makes this project so innovative is that if issues arise between the foster family and the child in care, the foster family moved instead of the child. This creates stability for the child because they aren’t having to pack up and move and they have a place to call home.

Lu’uma has 16 housing units that support youth at various points of their time in care. The center also facilitates a mentorship program to support their transition to adulthood through skill-building, connection, experiences and practical help. The development includes offices for health care and social services, so that housing and other needs are met for youth in the same space.

How many First Nations people are unhoused on stolen lands?—Ginger Gosnell-Myers

Ginger Gosnell-Myers, a Nisga’a-Kwakwaka’wakw Indigenous Fellow with Simon Fraser University, said that Lu’uma and similar projects in the Vancouver region have been working to fund housing for more Indigenous people in an increasingly unaffordable housing market.

“How many First Nations people are unhoused on stolen lands?” she said. “The thing about the urban Indigenous community in Vancouver is that we use all of our services all the time, it’s a permanent community and it’s growing. But we don’t see the rate of growth in our services and our housing catching up.”

While space for housing is crucial, Gosnell-Myers also pointed to the need for multi-purpose space for funerals, for dance groups to practice, to make regalia, to prepare food, and other cultural practices. Currently, these spaces are difficult to find. These are the activities that bring communities together, but affordability is tearing them apart.

This reflects the importance of housing, she said, on Indigenous resilience.

If we’re going to be resilient, we need to strengthen our communities.

Gosnell-Myers explained, “Indigenous peoples are…in the most vulnerable situations because we aren’t getting housing developed fast enough. And the communities that we grew to rely on are dispersing, because we can’t afford to live in our community anymore. So we can’t be resilient.”

Carole Ann Hilton, a business leader of Nuu chah nulth descent from the Hesquiaht Nation and founding CEO of the Indigenomics Institute, spoke to the historical relationship between Indigenous communities and housing development, and what that could mean for the future.

Historically, she said, Indigenous people have` “not been on the leading edge of the development side of the equation.” As a result, there’s a lack of “significant space for Indigenous worldviews and practices.”

Hilton said that it’s necessary to “look at a fuller spectrum of Indigenous participation,” including in decisions about siting and architecture that include “ways of seeing and using space from an Indigenous perspective.”

This includes, she said, thinking multi-generationally about present and future community needs, a level of planning that hasn’t happened previously because of the exclusion of Indigenous people from the process.

“It is not always something that’s been taken into consideration,” she said, “in terms of how Indigenous people use space, how we gather, and how we’re connected, more closely connected in terms of living and multi generational needs.”

Hilton points to Squamish First Nation’s upcoming major development, Sen̓áḵw, as to how things could change with Indigenous participation.

Sen̓áḵw as a verb means the start of something beautiful, and also respect for nature, for Indigenous peoples, for healing, and for a new path forward.

“The size and scale of a housing development of that magnitude and significance … has the ability to change the skyline of the city of Vancouver,” she said, “and to really place Indigenous economic power at the center of that.”

Hilton says that Indigenous-led design, partnership, finance, and housing on Indigenous terms is a “game changer” that highlights the growing economic strength of Indigenous communities.”

Sen̓áḵw is envisioned as an environmentally sustainable housing development that will be less car-centric, including reduced parking, and is slated to be the largest net zero carbon residential project in Canada. With a heating and cooling system fed by waste heat from the nearby sewer infrastructure, it’s intended to add more than 950 affordable homes and 6,000 rental homes to the local market.

Cities are both the biggest challenges, but also perhaps the biggest potential for addressing some of the big challenges we face globally of things like climate change, biodiversity loss.—Dr. Chris Ling

For Dr. Chris Ling, who leads the undergraduate Science in Environmental Practice program at Royal Roads University, Sen̓áḵw could signify a way forward for an array of ecological issues.

Beyond environmental implications, Ling pointed to the potential to personally impact residents.

“The more that we can enable people to live without cars, then the more likely they are to be making use of active transportation options, which is physically healthier,” he said. “On the mental health side, just the presence of green space within the development is a really good step forward.”

He said research indicates that access to, and even the sight of, green space can do a lot for mental health and well-being.

“It’s in the middle of an urban area, so there’s only a certain level of naturalness you can likely achieve, but the perception of naturalness is also an important part of that,” he said.”Certainly, that looks to be the intent here. That’s definitely a positive step forward.”

Innovative, Indigenous-led housing can build resilience, wellness, and provide opportunities for cultural revitalization and effective stewardship of land resources. It can also be delivered in a way that creates a validating experience, allowing a person to feel seen, reach their full potential and contribute to society with their basic needs met.

As someone benefiting from an expression of that possibility, Mike Alexander reflected on the opportunity he has at Skwachàys Lodge.

“I think I’m trying to make art that is reflective of my generations of artists that have this unique experience of being the descendants of people who went to residential schools,” he said. “It’s amazing what happens when a person’s needs are met, when human rights are taken into account and the real ideas of freedom and accessibility and inclusion, and what that looks like when that is extended in a respectful way. It’s incredible to see what develops as a result of that.”

Alison Tedford is an Indigenous author, marketing director, DEI consultant, and mom from Abbotsford, BC, Canada. Her work has been published on AlJazeera, CBC, Upworthy, and Today’s Parent. Her debut

Alison Tedford is an Indigenous author, marketing director, DEI consultant, and mom from Abbotsford, BC, Canada. Her work has been published on AlJazeera, CBC, Upworthy, and Today’s Parent. Her debut book, Chronic Profit, was released by Self Counsel Press in April 2021.