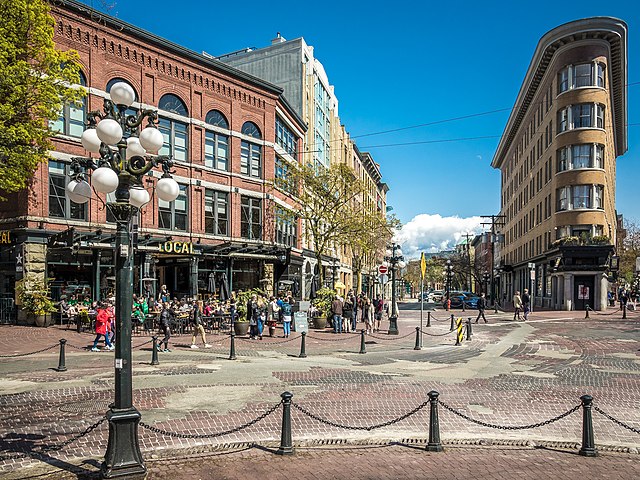 The summer of 2020 was unlike any other. Although the first wave of the coronavirus pandemic had subsided in much of the world, many of the jobs that had disappeared in the first, panicked lockdown hadn’t returned. In Vancouver, a sweltering heat wave created one of the hottest years in history. Mask waste began piling  up, and fears about coronavirus being transferred from touching surfaces led to restrictions on the use of reusable containers.

Despite ongoing fears about the virus, that same summer, thousands of British Columbians followed in the footsteps of people around North America and marched for action on racial injustice.

In lieu of that transformative summer, a group of Vancouver activists, researchers and social entrepreneurs gathered around a virtual table to map out the role inclusive employment could play in crafting a climate-conscious recovery.

“With the pandemic, as well as the discussions happening around anti-racism and how our economic systems uphold systemic inequalities… we were thinking about how building back better would look,” recalled Alice Henry, Just Circular Recovery and Transition project lead at Share Reuse Repair Initiative. “There was a lot of focus on green energy, but we felt we could be talking more about the circular economy, and how it can support social inclusion.”

The European Commission defines a circular economy as a system that “aims to maintain the value of products, materials and resources for as long as possible by returning them into the product cycle at the end of their use, while minimizing the generation of waste.”

The JCRT initiative aims to support companies that create safe, decent and meaningful jobs in the circular economy for job seekers facing systemic barriers. The hope is that this approach will reduce waste and support economic inclusion for historically-marginalized communities and individuals, such as those living with disability or facing housing insecurity.

Neha Sharma-Mascarenhas is a researcher at the University of British Columbia and the author of a report, Exploring a Just and Inclusive Circular Recovery, that forms the basis for much of JCRT’s work. “The conversation around ‘green jobs’ has been around for decades,” she says. “However, with the pandemic, the job losses and the fragility of supply chains, more people recognized that we needed to integrate [green jobs and inclusive local employment].”

Both Henry and Sharma-Mascarenhas say the circular economy is present in most people’s lives and circular practices have been common for centuries. Avoiding waste when hunting, canning fruit, quilting with scraps of old clothes or storing sewing supplies in a cookie tin are just a few examples.

Sharma explains that the answers to building a more just and sustainable recovery lie in using existing resources and being mindful of both our collective intake and output: “Reduce our consumption, consume the products we have for as long as possible, and when we can’t use them in the same way, repair them, reuse them or share them with someone who can. When that’s not possible, use the raw materials to make something else.” People who are employed in any of these job sectors — from those who manually sort recycling to those who develop apps to coordinate recycling — can be said to have circular jobs.

“Share, reuse, and repair has tremendous potential to create inclusive livelihoods for all skill and income levels,” Henry explained. “Yet these opportunities are not well understood.If we don’t start talking about how the transition to an inclusive circular economy looks, [the potential to increase the accessibility and affordability of everyday life] there won’t be a transition.”

JCRT held an initial information session in March 2021. By early 2022, they hope to have an established network of circular businesses and employment service providers sharing connections and best practices.

Chris Nichols is the co-founder of Wood Shop, an East Vancouver worker co-op where workers who have had barriers to employment make custom furniture with reclaimed wood. The co-op has been active since 2014. Earlier this year, Nichols participated in a small business panel organized by JCRT. “I think the only way organizations like ours can grow their impact is through collaboration,” he says. That’s our greatest asset, and something we need to use to our advantage. I hope others can learn from the mistakes we made, and from the efforts we’ve made.”

Henry sees Vancouver as a great drawing board for a circular transition.“There’s a great sustainability culture in the Pacific Northwest…and we have a lot of innovators and entrepreneurs focused on that here,” she said, citing Vancouver’s Project Zero sustainable business incubator as one example. The Vancouver Economic commission is among SRRI’s core conveners, and the city has imposed salvage and reuse requirements on many demolished homes. There’s also an established culture of sharing and repairing, with vibrant communities building around initiatives like the Vancouver Tool Library, the Thingery, repair cafés and repair co-ops.

It’s worth noting that the economic and cultural shift created by the pandemic has also played a role in shaping the ideas people had about economic recovery and just transition. In lockdown, Canadians had more time to think about the future they wanted to build, and in some cases, more money and flexibility to put their ideals into practice.

Cody Irwin is a self-described “circular economy nerd” and the founder of a catering company. As catering orders ground to a halt early in the pandemic, he was able to keep staff employed due to the Canada Emergency Wage Subsidy, and retool his business. “Our orders dropped 98 per cent in four days, but as devastating as that was, it turned out to be an entrepreneur’s dream,” he said.

Irwin, along with Rosemary Cooper of SSRI and Susanna Gurr of the Social Development Research Council, collaborated with students in the sustainable business program at the British Columbia Institute of Technology (BCIT) to develop a pilot project to hire people with barriers to employment in the company’s washing facility. He says the company is in talks with an organization that supports autistic job seekers, working toward bringing the pilot to life.

The company plans to “start small,” hiring one or two autistic employees before scaling up their efforts to hire other people with barriers, such as teenagers and people facing housing insecurity.

The BCIT pilot project also familiarized a cohort of students with the intersection between sustainable employment and inclusive employment. “It makes sense for the circular economy and meaningful employment for people with barriers to intersect; it was very eye-opening to learn about what that entailed,” says Kaede Mizukoshi, a member of the BCIT group.

“The BCIT project is a great example of projects we might oversee in the future,” says Alice Henry. “What’s great about that project is it highlights how a circular business can begin thinking about their role in supporting their community on the social side (not just the environmental or business sides), even when they’re just in the start-up stages.” Henry says the project is currently applying for funding to test prototypes in deconstruction, reuse of building materials, and electronics recycling.

For the moment, JCRT is focusing on the discussions that need to occur before a single timecard is punched. “I want to see a much richer conversation around what this can look like and also who it can benefit,” says Henry. “It’s not just about privileged [consumers] being able to feel better; this is something that can really benefit everyone, and it’s going to look different for everyone, too.”

Check out the related stories and resources: