Native American new urbanism: How the poorest county in America created a vision for the future of cities - Shareable
Skip to content 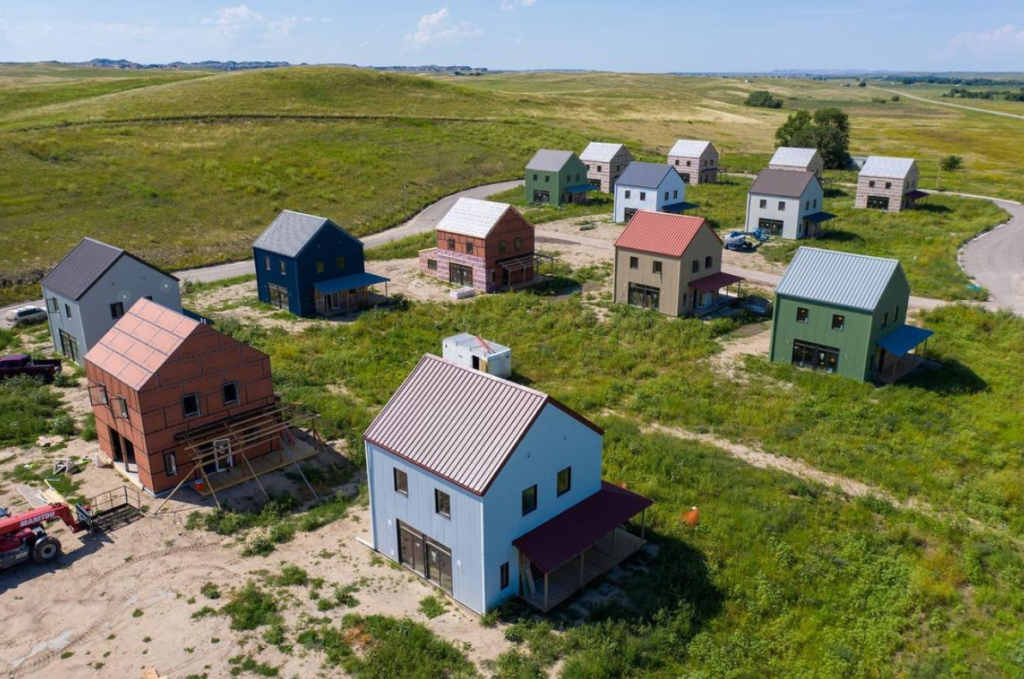 This article was adapted from Bright Green Future, a book that chronicles a global renaissance in people-powered solutions to climate change.

The field of urbanism puts the European city on a pedestal. There’s a sense that if we could just paste the walkable streets of Paris onto our strip malls and highways, we’d create paradise in America. What’s lost in this conception is the wisdom from thousands of years of Indigenous placemaking in North America.

On a road trip to interview farmers and ranchers for a book about people-powered solutions to climate change, I had a chance to see a Native American vision for the future of towns and cities.

My visit began in a gravel parking lot in Porcupine, South Dakota. Here on the Pine Ridge Reservation, in one of the poorest counties in the country, an unlikely revolution had transpired. Andrew “Andy” Ironshell welcomed me at the door of a portable building. He was the acting comms director for Thunder Valley CDC: A non-profit, Native American-led real estate developer.

There is truth to that harshness. Unemployment still hovers around 70 percent. Life expectancy is 48 years for men and 52 years for women. Many residents live in the equivalent of FEMA trailers with 15 people to a home. Yet statistics and images only tell one side of the story. Organizations like Thunder Valley reveal another.

When the spirits speak

The story of Thunder Valley began in a spiritual circle where young members from the community gathered for ceremonies with a local medicine man. In one ceremony, they were sitting in a sweat lodge, talking about their frustrations with the tribe and all the forces that had wronged them and their ancestors. “They vented ‘Oh the tribe should do this, the tribe should do that.’”

It was then that their ancestors answered back. Nick Tilsen, who’d go on to become Thunder Valley’s first executive director remembered what they said. “How long are you going to let other people decide the future for your children? Are you not warriors? It’s time to stop talking and start doing—to not come from a place of fear, but to come from a place of hope.”

The message from the world beyond was clear: they had to look inward. In doing so, they’d come to find the talent and power needed for change among themselves. Some were grant writers. Some knew how to organize and speak in public. Others knew carpentry.

Tired of huddling in a small trailer, they decided to focus their first project on creating a new ceremony house because they didn’t even have that. After finishing the ceremony space, they went searching for ways to carry the message of empowerment beyond their circle. “We didn’t want to hand out propane and Pampers every month. That’s needed, and we understand how that works, but it’s a Band-Aid. It’s not systemic change.”

It took several years of meetings to gather the collective visions of over 3,000 people on the reservation. Out of those meetings, Thunder Valley, the spiritual circle, created Thunder Valley Community Development Corporation. Through fundraising, they were able to buy a 34-acre plot of land along a main thoroughfare, nestled between rolling hills. Renderings of their plans showed a mixed-use community with single-family homes, apartments, a community center, retail along the road, a vocational school, and a permaculture farm.

“We’re looking at potentially 900 people living here,” said Andy. “Right now, Pine Ridge needs 4,000 houses just for us adults. That’s not counting all of the kids that are in high school, and 65 percent of the Pine Ridge population is under 25 years old.”

Their focus is to provide housing across the income spectrum. As Andy put it, “You should be able to live next to the college professor who makes ten times more than you.”

It’s an ambitious plan and not the kind of thing that will go up overnight. “We kind of did it backwards from how the mainstream would do it, where they say ‘build it and they will come.’ Well, that’s a very expensive model if they don’t come,” said Andy. “Ours is more like, let’s build the capacity of the community champions and figure out what they think their needs are, and then support that and build an ecosystem around it.”

They started first with a simple straw-bale house. Recruiting students from the local colleges and gathering donated materials, they were able to test what the process might look like. They figured out how to teach young people construction and how to build an energy-efficient house with simple materials. “The process is much more powerful than the deliverables that you see.”

When I visited, they were putting the finishing touches on the first seven homes. They were arranged in a circle with an open space in the middle. “Traditionally this is how we used to camp,” said Andy. “We call it Tiyóspaye, or family. We really thought about that sense of community in a space. In order to get to the community center, you have to meet your neighbors.” The residents of each circle will get to pick what goes in the open space, anything from a garden, playground, or picnic area.

Andy led me into one of the houses. A spacious open floor plan with a kitchen, dining room, and living room made up the bottom story, with three bedrooms above. It was far different from the current state of housing on Pine Ridge.

According to Andy, the owner of this space was one of the construction trainers who taught the youth who helped build it. He was 24 and had just become the father of a baby. “He’s got the ‘Dances with Wolves’ story,” said Andy. “He grew up in a log cabin with dirt floors, no different rooms, just one big space and that’s how they grew up. Water outside from the pump. And now he’s buying this house.”

All the homes were designed to use very little energy from the grid, through tight insulation combined with solar panels. Thunder Valley owns the panels to cover the maintenance, but lets residents reap the benefits of utility savings. It’s an important service, as electricity on the reservation can be expensive. Grandmothers often sell handmade quilts on the side while the kids grow weed, just to cover the cost of those bills.

We stepped outside onto the farm. They designed it using permaculture principles with the intention of teaching people on the reservation how to grow their own food. Rows of chokecherries and vegetables were raised next to chickens from a nearby coop. Together the community was regenerating their land as they regenerated their food system. “Ninety-nine percent of the food here is driven in by trucks. So we want to be able to start to feed ourselves.”

At the time, they had just two-and-a-half acres of farmland, but Andy said that once they figured out the system, they aimed to scale it to 100 or 1,000 acres. To do this, they planned to start a cooperative business, Thunder Valley Farms, where the workers will also own a portion of the venture.

Thunder Valley employed 65 people year-round. In the summer during their construction training program, that number would shoot up to as many as 100. In a place where people live on as little as $7,000 a year and unemployment hovers around 70 percent, Thunder Valley was creating meaningful job opportunities.

There was a dynamic energy in the office, which was still set up in a portable building. It felt like a cross between a startup and a revolution. A mix of local people from the reservation and others from across America were coming together to make this project a reality.

An Indigenous vision for the future

Thunder Valley is just one community on Pine Ridge. There are a total of nine political districts, each with their own communities. “We’d like to see one of these in all the districts,” said Andy. The development might look different in each place. “We’re right along the road here, so retail made a lot of sense. But other more isolated communities might have more agriculture.”

They created a template for what a 21st century, regenerative community could look like. It’s not meant to be copy-pasted all across America, but to serve as inspiration for how one might go about creating a development process that’s reflective of the people in each place.

Since starting Thunder Valley, over 70 other Indigenous communities had reached out to them and expressed an interest in doing something similar. “We don’t want Thunder Valley to be the exception,” said Nick. “We had to move beyond inspiration and start trying to build infrastructure and a system that could support a growing movement for Native people.” He would go on to found another organization, the NDN Collective, to build Indigenous power at a larger scale.

Incorporating many voices into a single community vision for the future can be a challenging experience, and at the end of one town hall meeting, Nick recalled feeling exhausted, ready to go home for the day. But right before he could leave, someone approached him.

“This unci, that means ‘grandma’ in Lakota, she ended up coming up to me. She was 91 years old. And she came up to me and she said, ‘Takoja,’ that means ‘grandson.’ She said, ‘That was the best meeting I ever went to.’ And I was like, ‘Really? Why?’

That’s the pursuit of Thunder Valley and community builders everywhere. It’s a vision for change that asks us what we really want for our future—and means it.

Thunder Valley’s strength doesn’t come from any one silver bullet, but from the way its leaders have combined many different principles. They’ve grown incrementally, building off each success to create a time-tested and cost-effective process. They’ve rooted everything in the desires and culture of the community. They’ve combined tactical bottom-up action with a long-term vision. And they’ve bridged the divide between places to live, work, and play, and the land that supports them all. By coming together as the resident experts, we can begin to create places that our descendants may one day look upon with the same pride and admiration given to the great cities of the world.