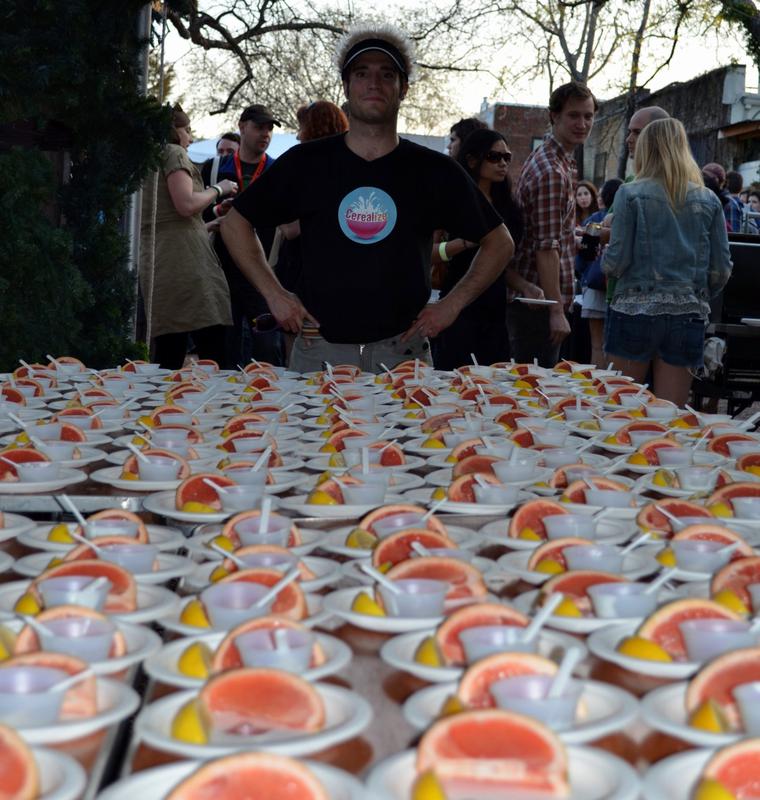 Food is arguably our greatest common denominator and sharing food is hands down the best way to make friends. As someone who loves to share food, and has cooked professionally for the last ten years, I’ve never had trouble finding friends to attend my dinner parties.  In fact, my cooking skills have lead me to some of the most amazing adventures of my life! It’s time I share the stories with you…

My most recent adventure was inspired by Share Austin!; a gathering of the sharing minds hosted by Shareable Magazine and others at the SXSW interactive festival in Austin, Texas just a couple weeks ago. My intention was to infuse ShareAustin! with some delicious local grub and to lead the participants in what would become the world’s largest Miracle Trip! Miracle Fruit is a berry from South Africa that contains the active ingredient miraculum which causes sour foods to taste sweet! My plan was to orchestrate a 200 person shared tasting experience, but first I needed to get to Austin. Enter StartupBus.

"StartupBus began life as a joke in Australia: a road trip starting in San Francisco with friends, but with the twist of launching a startup on arrival in Austin in time for the SxSW technology conference," says their about page. Three years later it has now become the largest and most demanding startup competition in the world with ten buses representing more than three hundred entrepreneurs. I was interested! Soon I had and invite and, with a bit of culinary bribery, I was aboard the Silicon Valley StartupBus.

Under slept and over caffeinated, my adventure began at 6pm on Tuesday, March 6th at the StartupBus HQ in San Francisco. Buspreneurs, as we were called, were categorized as hackers (computer programmer), a designers (they make things pretty) and hustlers (we make the project fly). After a brief pit stop, in a strip mall parking lot, we had and idea and a team. This was my first hackathon, but I was ready to hustle.

At first, custom cereal seemed like a lame idea, but then I began to think outside the box. Literally. Drawing inspiration from Airbnb’s famous bootstrapping fundraiser cereals, Obama O’s and Cap’n McCains, we realized how cool it would be to customize not only your cereal but also the box! Even cooler would be to share the profits with said customizers if someone was to buy their design via our website! The idea felt right and our creative juices began to flow. Our team of 11 was in the zone to the point where we hardly even noticed the film crew documenting our every move.

Three days, 1,756 miles and countless cups of coffee later, our silly idea had a website and Cerealize was born. We designed, printed and stuffed boxes of cereal which were then handed out for free on the streets of Austin. Our idea was a hit and we found ourselves in the grand finals of the Startup Bus competition. Product in hand, we burst into the room, tossing cereal boxes into the crowd. Each judge was given a box of cereal, a spoon and milk. We then began out pitch. Needless to say, we WON!

The positive vibes from my ride to Austin snowballed into a beautiful community who then came to support Shareable at ShareAustin! Many left with the feeling that something larger was happening, something powerful and exciting. I know I did. This experience has yet again confirmed for me that great things happen when we give. I’d like to think that Austin is a bit more weird, and tasty, thanks to Shareable.

Shareable is in the running for a $300,000 grant from the Knight Foundation to redo our site using an open design process. Please help us win by liking our proposal and leaving a comment or question.