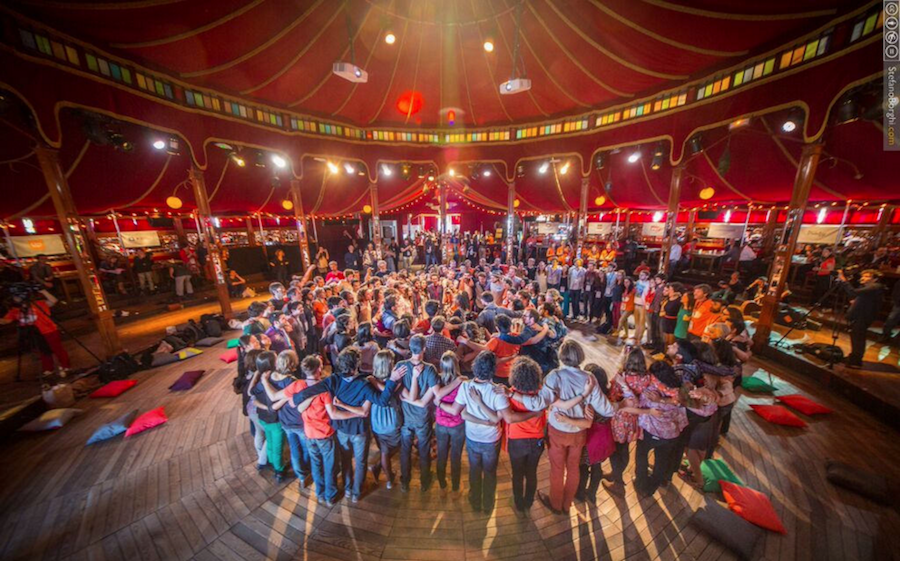 OuiShare is on a mission to build and nurture a collaborative society. A forward-thinking, action-oriented community of thousands from around the world, the organization has been decentralized from the beginning. Formed in Paris in 2012, OuiShare is built around the notion of letting community members take initiative and enabling the community grow on its own.

“It’s this whole idea of do-ocracy that we talk about,” says Francesca Pick, OuiShare Connector and Chair of the upcoming OuiShare Fest. “We want people to be able to go forward and do something—to take leadership and let others follow them.”

In OuiShare, a leader can pop up anywhere on any project. The organization embraces dynamic hierarchies where hierarchical relationships exist, but these leadership roles are dependent on a project, situation, or time, not fixed.

“An issue with hierarchy is that once in place, they are very hard to change or get rid of,” explains Pick. “We try to distribute leadership, but we are for leadership. People want to talk about self-organization and say, ‘You don’t need a leader.’ In OuiShare, we do need leaders—people who are willing to take on responsibilities—but we can have many of them and they can lead different areas and jump between different roles.” 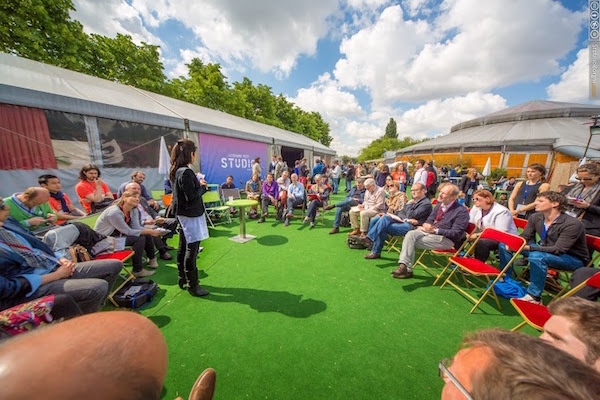 Within the organization, OuiShare experiments with different ways of organizing, thinking, and collaborating. A key element is a willingness of community members, and the organization at-large, to experiment with new ways of being—to put into practice theories about how we might collaboratively create a healthy, just communities.

For the past three years, OuiShare has hosted OuiShare Fest at Cabaret Sauvage in Paris. The four-day event is a gathering of international thought-leaders, change-makers and doers, brought together to share ideas, challenges, experiences, projects and more. The idea is to learn from presenters and other participants, and think critically about trends and emerging ideas in the global culture of solutions activists.

At last year’s event one of the hot topics was blockchain. Conversations about the technology and how it could be used in arenas and platforms other than financial, flourished. In particular, how it could help create collaborative autonomous organizations that aren’t controlled by any one person.

As Pick writes in Decentralizing (Part of) OuiShare with Blockchain: Experiment 1:

Blockchain is most known today for its applications in the world of finance. But its proliferation has also sparked the development of a growing ecosystem of infrastructures and tools that build on top of the blockchain or decentralized protocols, for example Uber-like ridesharing app La’Zooz, digital art attribution platform Ascribe.io as well as Swarm and Backfeed, both tools for distributed, collaborative organization.

To experiment with ways the technology could help address numerous challenges related to decision-making, transparency, governance and value distribution, OuiShare put blockchain technology into practice. Using Backfeed, a “social operating system for blockchain-based applications,” they decentralized part of OuiShare Fest by using the tool to help create the festival program. Using Backfeed, they hoped to improve the sourcing of the best content from the community and make it easier for the members to contribute to the project and get recognized for the value they provide.

“What’s really important to us,” says Pick, “is that Backfeed is a tool that can enable technological decentralization, which is one level of decentralization…There’s so much growth in the area of finance, but it’s not limited to finance. There are so many other things you can decentralize.”

True to its reputation for experimentation and critical thinking, the OuiShare team launched the experiment with an open mind.

“I went into this experiment definitely not assuming that this is the thing that’s going to change everything and it’s going to solve all these questions we’ve had about value distribution, and people contributing, and being volunteers, and being paid,” says Pick. “My aim was to see what the potential of blockchain is, how could it be used, and to debunk the myths and the hype and utopian stories that are being told…There are very few people who have been applying it so that’s why we wanted to give it a try.”

The result of the Backfeed experiment, says Pick, is that they had some interesting results very fast, but they hit a wall in terms of how far they can go with it. The experiment brought to light the need for a reliable tool designed to meet their own needs, and they learned that decentralizing a project is easier said than done.

The theme for this year’s OuiShare Fest is After the Gold Rush. It’s a nod to the fact that the sharing economy, like the California Gold Rush of the 1800s, appears to be benefiting not everyone, as idealists hoped, but a handful of stakeholders in mega-companies. As Pick writes:

Now we can only look back fondly at those early times of abounding, and possibly naive, excitement and hope for these new models. For now, it appears only few are benefitting from the abundance of value that has been created by communities and entrepreneurs worldwide – few organizations that are starting to look suspiciously similar to those they were disrupting – or worse? The gold rush was not profitable for many who set out on the initial journey. And the biggest sacks of gold are going to those providing the picks, shovels and infrastructure, those fueling the gold rush itself.

Now on the other side of the sharing economy gold rush, OuiShare is calling for action and to mobilize and build from where we are now. The extreme examples, created by mega-platforms including Airbnb and Uber, helped identify questions that need to be asked and problems that need to be addressed.

“Last year was, we’re lost, we’re criticizing, we’re having critical discussion,” says Pick of last year’s Lost in Translation theme. “Now, it’s about action. After the Gold Rush is about having the realization that this happened, but it’s passed…[and] there are all these people that have mobilized all these resources to come to this place, in a metaphorical sense. They learned all these things and they’re ready to do stuff, now we actually need to build something new from what we have.” Pick adds with a laugh, “The gold rush got us to move our ass so now we can actually do something.” 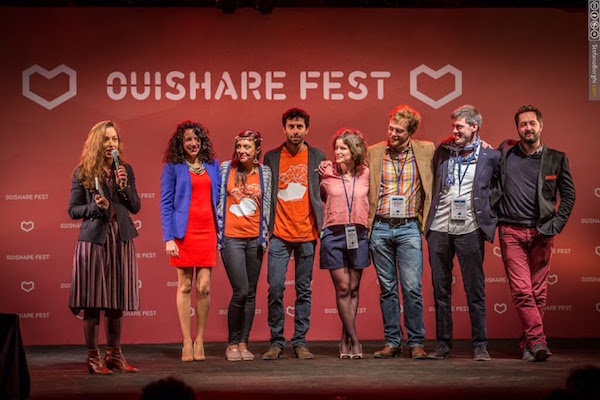 The theme of this year's OuiShare Fest is After the Gold Rush.

The 2016 OuiShare Fest comprises 200 sessions in seven spaces, dozens of speakers from around the world, including Shareable’s Organizing Director Tom Llewellyn who will lead a workshop about Sharing Cities, and 15 satellite events. One of the key topics to be discussed at After the Gold Rush is the future of work. The fest promises to play host to countless conversations about ownership models, the new workforce, the freelance economy, worker cooperatives and platform coops, organizational transformation, new forms of governance, purpose-driven businesses and organizations, and blockchain.

New at Ouishare Fest this year is Fest Forward, a three-day accelerator for collaborative, open source projects with high social impact. Growing out of innovation community POC21 and the OuiShare Awards, Fest Forward is replacing competition with an opportunity to collaborate and be action-oriented. The goal is to help projects overcome challenges in areas such as product design, business models or scalability by giving them a customized program and pairing them with mentors.

As OuiShare continues to grow and evolve, and OuiShare Fest thrives as an international gathering of new economy changemakers, the organization is always looking for new ways to empower individuals and communities around the world.

Moving forward Pick is working on open sourcing OuiShare Fest by creating a tool to document how they organize, create and run the festival, so other teams can do the same thing. The goal is to empower others and encourage the growth and evolution of OuiShare Fests and related events in cities around the world.

With a new tagline: Exploring the Edges, OuiShare Fest hopes to catalyze new ways of thinking and acting in regards to the economy, society and ourselves.

“There’s a process that happens in society,” says Pick, “that new ideas appear at the edges then they move into the center. Once they’re in the center, they’re no longer new and there are all these new ideas that are coming from the edge into the center. The purpose of the fest, and of OuiShare overall, is to take those ideas from the edges, to find them and find the people, and to bring those to the center so they can be brought into society overall. It’s a perpetual process.”