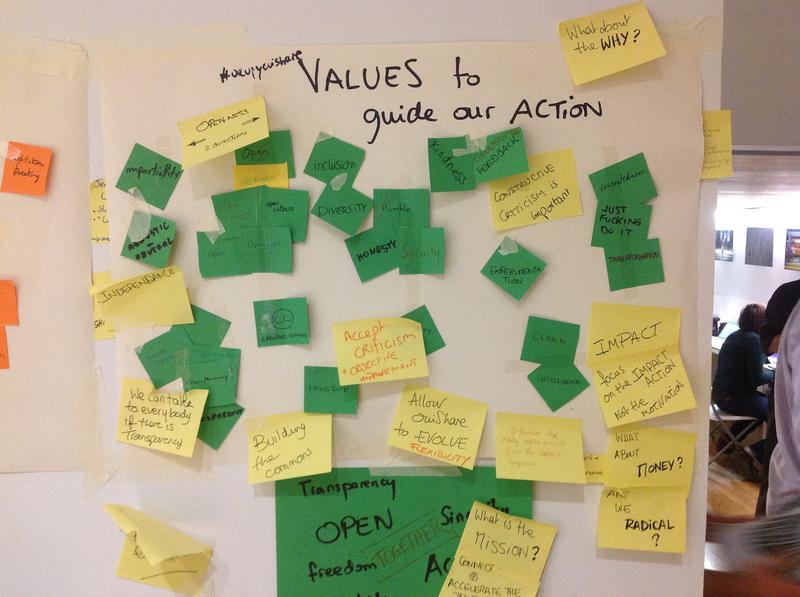 One year after the birth of the global community OuiShare, we decided to launch an international festival dedicated to the collaborative economy called OuiShare Fest. Given that OuiShare is a horizontal organization based on peer governance, this festival is an experiment in participatory and bottom-up event organization, with the community at its center.

And so a few months ago, we embarked on a journey to co-design this three day event in Paris with the community, a process which has become an amazing learning experience for all of us. But what exactly is a co-design process?

From Co-design to Co-curation

The practice of co-design is not new. The 40 year old concept from the design field refers to a process in which designers give users the tools to create solutions themselves, blurring the line between user and designer. This is intended to produce an outcome users are more likely to accept, since their perspectives are incorporated into the design process itself.

The concept of co-design can be applied to other areas outside of the design field, such as the organization of events that involve a community, and is then often referred to as co-production, creation or curation. Frog Design has developed a collective action toolkit (CAT) (which will be presented at OuiShare Fest) to help communities co-design such collaborative activities, launch projects at a local level and maximize their impact.

Typical co-design formats are hackathons, gatherings of computer programmers to collaborate on a software project, and open design jams, a newer format developed to bring together designers to work on a user experience challenge (the equivalent of a hackathon for designers). BarCamps, conferences where the content is generated by the participants, and workshops are other participatory and open formats used to co-create events.

One of the leading researchers in open and p2p design theory is Massimo Menichinelli, who founded openp2pdesign.org in 2005 to further expand his methodology and help companies, organizations and communities develop open and collaborative processes through workshops, lectures and publications.

He was also one of the organizers of the Open Knowledge Festival in Helsinki last fall, a co-designed conference that was the first of its kind. “The Open Knowledge Festival was amazing”, says OuiShare Connector and product and service designer Simone Cicero. “With OuiShare Fest, we want to build on the experiences from it and take this experiment to the next level.”

Collaborative Curation Happening Within the Community

What’s new about OuiShare Fest is that the co-design process is even more open than at the Open Knowledge Festival, since all content is expected to emerge from contributions from the community. “When we started organizing OuiShare Fest, we had no idea what the program would look like. It’s fascinating to see now how our program is organically emerging from the bottom up, driven by people’s interests and knowledge”, Flore Berlingen, OuiShare co-founder explains.

The co-design process of OuiShare Fest started with an open call for participation in early February, which received over 100 responses from people with topic suggestions, speaker proposals or skills to offer in organizing the event. “We were very overwhelmed by the great number of contributions. The hardest part was selecting which ones would make it into the final program”, says Flore.

The next step of the co-design process is when the magic really starts happening: once a proposal is selected, the contributor or volunteer is invited to co-create a part of the program and join our discussions on Trello, a highly flexible online collaboration tool, which has become a fundamental part of all our collaborative and remote work within OuiShare.

By letting you create individual ’cards’ for micro tasks, the tool makes it easy to involve volunteers in the organization process and give them tasks immediately. Using Trello was probably one of the best decisions we made, since it has helped us lower the boundaries for others to participate, especially in small tasks. Simone states, "I’ve never seen people from outside an organization jump into an organizational process so easily. We’ve had at least two dozen people involved in the concrete organization of the program so far.”

Now the challenge is how to keep the co-design process going during the event, and not only limit it to the event preparation. Every single attendee should feel himself as an active participant and be able to launch spontaneous workshops or sessions. “We are leaving empty slots in the program for co-creation and have planned a BarCamp on the second day. But with such a long list of great speakers, it’s hard to make room," says OuiShare co-founder Benjamin Tinq.

Simone, who has experience with experimental processes, points out how crucial clear communication is. “Experimentation is risky. Someone expecting a normal conference from OuiShare Fest may be disappointed. It’s important to mediate expectations and explain the level of experimentation at works.”

When you do something this new the key to success is to try many different approaches and stay adaptable. If you want to engage people, think hard about the tools you use, because they will determine the communication flow within the team and influence the work process. For us, simply switching from Facebook to Trello for coordinating this event has given a huge boost to people’s engagement. So if one tool is not working for you, don’t hesitate to drop it and try another.

When we set out on our co-design journey, we did not know what to expect. Now we’re three months later and our program is almost ready for printing. The end result? We’ll see in May, and believe me, we’re as curious as you are.

Francesca Pick, an American citizen born and raised in Germany, is a B.A. graduate in Communication & Cultural Management from Zeppelin University. She wrote her bachelor thesis about collaborative consumption

Francesca Pick, an American citizen born and raised in Germany, is a B.A. graduate in Communication & Cultural Management from Zeppelin University. She wrote her bachelor thesis about collaborative consumption and building trust in peer-to-peer marketplaces, for which she won an award by Microsoft about the potential of IT in Europe. She is a core member of the global community OuiShare and is co-editor of OuiShare magazine. Before and during her studies, Francesca interned in Germany, the USA and Italy in the fields of marketing, PR, sales and advertising and worked at the student founded agency “Spread the Word” for social business development. This sparked her interest in sustainable business models and the sharing economy.