A people-powered legacy: community hydro on the River Thames - Shareable
Skip to content 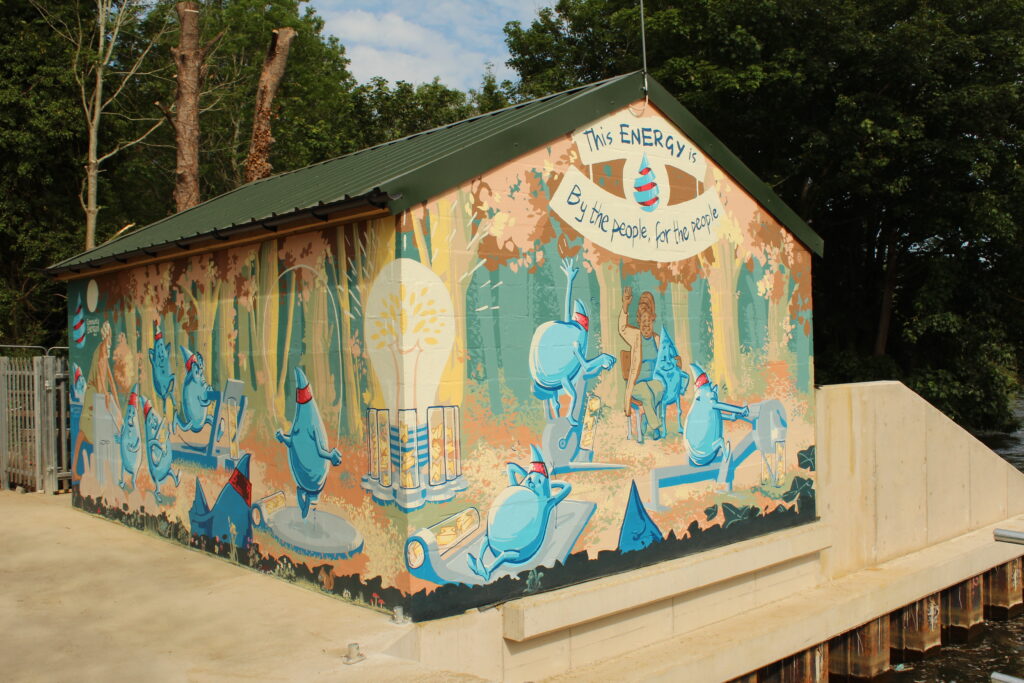 After several weeks of dry, warm weather in Reading, Berkshire, it finally rained. The rainfall was swiftly followed by an email with the exciting, all-caps subject line: “WE’RE GENERATING!” The town’s new hydroelectricity scheme, powered by the flow of the River Thames, was finally switched on.

While most people lamented the end of summer, the team at Reading Hydro Community Benefit Society (CBS) were celebrating the downpour. Understandably so: This £1.2 million project has been entirely volunteer-led and realised. Years of planning and muddy work days, persevering through sweat, blood, and bureaucracy-tinged tears have now finally come to fruition.

This is the seventh hydroelectric scheme to be constructed on the River Thames, but only three of those are community-managed. Aside from being a welcome step towards a renewably powered future for southeast England, Reading Hydro has brought the community together on so many levels. The scheme is expected to generate 320 megawatt hours of clean electricity per year. But the amount of community cohesion, awareness, friendship, and skill-sharing it has generated is just as powerful.

Community energy schemes have grown in popularity over the last two decades, with the British government taking some steps to make them more feasible, but we still fall far behind other European countries. According to Renewables First, the proportion of energy generated through community-owned production amounts to 86 percent in Denmark, 15 percent in Germany, and a woeful 0.5 percent in the UK. When communities take energy generation into their own hands, it connects the user to the source. Greater public appreciation of what goes into that easily flicked light switch is possible, and this hopefully encourages more mindful consumption. On top of that, community energy schemes generally utilise localised, renewable resources.

This is the case in Reading. Walking along the river path one day, Tony Cowling, the founder-director of Reading Hydro CBS, found himself contemplating the power of all that water. Caversham Weir, next to where the turbines are now located, has a drop of approximately 1.4 metres and a substantial average water flow—both sufficient for harnessing power. Working with the Reading Sustainability Centre, a local sustainability education project, Cowling looked to local history for inspiration. Records show that water-powered mills had been located nearby for hundreds of years, with one of the oldest examples dating back to 1086. Unfortunately, most of these had been demolished by the middle of the 20th century. Armed with this hydraulic history, the group began their research.

Navigating turbulent waters: A journey of “many, many licenses”

How do you start to convert flowing H2O into electricity? And fund it? Luckily, Reading is home to a strong pool of technically minded people, due to the local industries based here. There was a significant amount of expertise to be found among the willing volunteers — from civil engineers to hydrogeologists, as well as hydraulics and sustainable energy specialists. But navigating the permissions and licenses needed was trickier. Reading Borough Council and the Environment Agency were very supportive of the idea, but it took around four years before discussions on logistics, site surveys, building plans, and license requirements were concluded.

The current Chair of Reading Hydro CBS, Sophie Paul, explains why it took so long: “Licenses are not straightforward; it takes months and even years to negotiate a license. And we have many, many licenses! Because you’re working in water, that’s something everybody cares about, and it’s dangerous.”

But the group persevered. In 2017, Reading Hydro CBS was established to take the project forward, and by 2018, planning permission had been granted and solid construction plans could be developed. The next step was to secure funds.

Compared with other forms of renewable electricity, hydropower has the most expensive initial outlay (although the British Hydropower Association reminds us that, once built, the infrastructure is the most enduring over time). Reading Hydro ran three community share offers to raise the capital for the hydropower plant. The response from local people was phenomenal. Most of the £1.2 million raised came from around 750 shareholders, who were mainly local individual investors.

Even when unforeseen costs made the third share offer necessary, investors were still enthusiastic. “There was a huge amount of interest from people saying, ‘this is a great scheme, we want to see it happen,’” says former strategy and marketing director, Andy Tunstall.

Local people are clearly proud to see clean electricity being generated in Reading. But they stand to benefit in other ways too. Reading Hydro is constituted as a Community Benefit Society in the UK. This means that investors will gradually have their capital returned to them, with interest. It also means that any surplus income will be put into a Community Fund and made available as grants for other local, eco-friendly projects.

The Thames Lido, a nearby swimming pool and restaurant, will be the main electricity customer, with any surplus then being sold to the National Grid. Reading Hydro benefits from the UK Government’s Feed-in-Tariff, which ensures small-scale electricity providers are paid a fixed fee for each kilowatt hour they generate, in addition to their income from selling the electricity. This incentive—vital in making previous community energy projects viable—was sadly closed to new applicants in 2019. Reading’s hydroelectric project may be one of the last in the UK to benefit from this support.

An army of volunteers

An enormous amount of unpaid time and generous support has been given to make the hydropower scheme a reality. Around 250 volunteers, including the directors, have been involved, with paid contractors used only for the most technical aspects of the work.

The cost of the project has been kept as low as possible by involving volunteers in every stage of the process, from initial ground clearance to building the fish pass (required by the Environment Agency to enable fish and eels to bypass the turbine) as they move upriver. Volunteers also built the turbine house, which houses the generators and electrical control systems. Even the monumental task of pulling a cable through a conduit underneath the riverbed, was carried out entirely by volunteers. Fifty people were trained and turned up to help with this labour of love.

When Commando Jugendstil won a competition to design a mural for the turbine house wall, volunteers were again quick to don their overalls and help with painting. The end wall of the building is now decorated with bold Climate  Stripes, devised by Ed Hawkins of the University of Reading, which represent the stark rises in global temperatures since 1863.

It hasn’t always been smooth-sailing of course, but the immense public support has kept the team buoyant. “This time last year, there was a strong chance the project would fail. It’s been very tense the whole way along. But friendship has kept me going,” says Paul. “It is the best working group I’ve ever been in. The way we mutually back each other up is wildly unusual.”

The slogan on the mural sums up the driving-force behind Reading Hydro perfectly: “This energy is by the people, for the people.” And the people are inspired to do more.

Jo Marie Hooper is a communications strategist and writer based in Oxfordshire, UK. After working in the humanitarian sector for many years, supporting refugees and asylum seekers in the UK

Jo Marie Hooper is a communications strategist and writer based in Oxfordshire, UK. After working in the humanitarian sector for many years, supporting refugees and asylum seekers in the UK and overseas, she returned to her passion for wordcraft. She began to specialise in producing impact stories for NGOs, eventually copywriting an entire book for Oxfam in Vietnam. She went on to work with visual storytellers to communicate sustainable development projects and now writes feature articles related to sustainable living. Jo also works as Communications Manager for a tree-planting charity. She is inspired by community-level action, the resilience of nature and watching her vegetable plants grow.