Catching the sun: How communities create their own people-powered solar solutions - Shareable
Skip to content 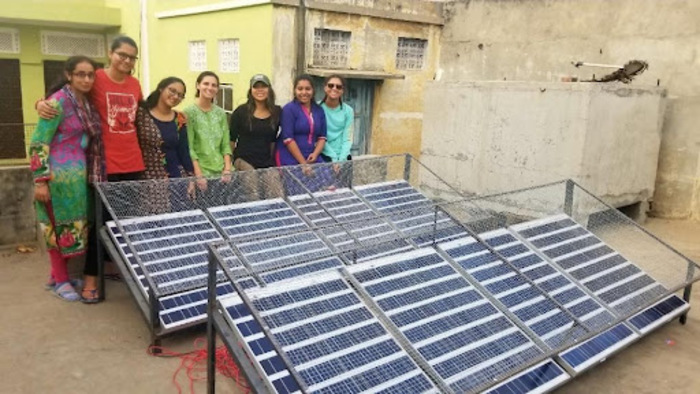 An instillation team made up of students and community members stands with the solar panels and metal protection grate they created for a local business owner's roof. Baraut, Uttar Pradesh, India.

The following is excepted from To Catch the Sun: Inspiring Stories of Communities Coming Together to Harness Their Own Solar Energy, and How You Can Do It Too! by Lonny Grafman and Dr. Joshua M. Pearce. Download the open access e-book completely free here.

Summer of 2018 found me with seven US students (from Humboldt State University in California) and eight Indian students (from Lady Irwin College in New Delhi) living in pairs with families in Baraut (a small city) in Uttar Pradesh (Northern India). I was the co-director of the program with Dr. Meenal Rana, who was the visionary creator of the program in India bringing together amazing partnerships between universities, organizations, and communities. Our host was ESRO (Environment & Social Research Organization), a local NGO (non-governmental organization) based in Baraut, which coordinated our work in two nearby villages: Tavelagarhi and Daula.

Which translates to, in English: “Hello (with respect). I am grateful for your warm welcome. My name is Lonny Grafman and I am a professor of Engineering at Humboldt State University.”

It took me a bit due to the sounds that are not common in any of the languages I typically try to speak. The audience applauded, which was quite sweet of them. After that, Meenal Rana started translating for me. I started in English with, “I have been practicing that for a while, and it was quite hard. Except for two words: ‘Namaskar,’ because that is a common word in California, and ‘priya,’ because that describes our reception here.” I thought that “priya” meant warmth. It did not…in fact it is a relatively common name. Meenal looked at me confused, and asked, “What?” I said, “warmth.” She corrected this for everyone.

So, during my first English speech in this community, I said that there were only two Hindi words that were easy for me…ones that I thought I had just said…and I was wrong about 50% of them! This became foreshadowing of a few events through the summer. This is also one of my favorite parts of working in new locations. When I am very familiar with a language and an environment, it is easy for me to start thinking I am correct in my language and assessments. I must actively remind myself that I am certainly missing things and need to keep my senses open to conflicting information. I need no such reminding in a new place because the environment reminds me daily!

Northern India in the summer is hot. Our first week there was above 100°F and very humid. Students were getting used to squatting toilets, constant sweating, new foods, new living arrangements, and most difficultly, new mores. Our group was predominantly women. We had one male student and one male teacher (me). Our students were from some of the most progressive and liberal places in their respective countries. The city of Baraut, and even more so the villages in Uttar Pradesh, are more traditional. Traditional gender dynamics are still very strong and upheld in these locations. We all had a lot to learn, and all our students needed to adapt to the environment.

Luckily, as with all design projects, the very first step is empathy building. Our students’ job as travelers, guests, and designers was to observe and understand. Before we arrived, an independent organization (The Center for Environment Communication) conducted interviews with local community members. I was quite impressed with not only their dedication (they provided over 44 hours of interviews) but also their flexibility and understanding. At first, the interviewers suggested to ask the typical leading questions of most NGOs, questions like:

I like these questions; they produce excellent graphs and help with grants and assessment, but they aren’t fantastic for empathy building nor design. Instead, we worked together to create design-focused questions, such as:

These types of open-ended questions are hard to quantify. They are not science. They are empathy building and, in my opinion, much more telling of what your audience wants. Through these questions, we found that the top priorities were water, waste, and energy. An example user-story highlighting the need for energy came from a village girl who described her problem, which translated and paraphrased went like this, “We do not have regular electricity supply. When the power cuts, I am sometimes unable to complete my homework. For this I get punishment in class and not allowed to sit in the class.” This type of story helps us to understand the problem and starts to circumnavigate a solution (e.g., very small solar lighting for homework). So, I brought my favorite solar tools, especially some nice multimeters. I try not to bring supplies, as sourcing them more locally brings more long-term success to the project… but I couldn’t resist also bringing a few small, efficient panels and my favorite robust, waterproof USB chargers.

Once on the ground, we conducted our own interviews, conversations, and observations, and most importantly created teams that included a diverse mix of students and community members. After the first two weeks, we abandoned solar as the water and waste issues were more pressing. We did one small community teach-in on solar, and then I put away my solar tools for the summer…that is, until RK Singh, a community member who owns an electronics store in Baraut, suggested we help build his system.

He was going to build the third system in Baraut, this time on his own home. It was going to be a 576 W system with one very unique aspect. The system would have a metal grill above all the panels. This, of course, would reduce the efficiency, and therefore power output, of the array… so why have it? RK informed me that it is to prevent the panels from breaking due to monkeys throwing rocks at the panels. I, of course, accepted his reasoning as he has had years of experience with solar power and with monkeys. I was hoping to eventually witness this behavior myself, and often wondered why the monkeys throw rocks at the panels. I thought that maybe it was due to the bright reflection, like how some birds attack windows.

Together we assembled the system. Of course, the day was hot, and the roof was hotter. By the end of the install, we made a poor decision and assumed that all the seemingly matching government approved panels we were installing were indeed identical. They were not. It turned out that the positive and negative terminals were switched on some of the panels. Luckily, we did not break anything, and we tested before finalizing the install. With the multimeter, we were able to determine the correct polarity of each of the panels and rewire them for a successful install.

During the install, I was teaching the student installers about the efficiency loss of the grill. At the end, RK called me over and asked in the politest English if I thought that monkeys threw rocks at the solar panels. I did. I thought he had taught me that. Through language differences, I had misunderstood.

It was in fact to protect against the rocks that people throw at monkeys to keep the monkeys from coming into their home and stealing property. Often, the monkeys are up high when they are plotting their pilfering. Also, the panels are up high on the roof hidden from view, but right in the path of the rock when it misses the monkey… which it almost always does. Now the world made a little more sense.

This grill is an interesting story in environmental differences. It is also a telling example of the tradeoffs between criteria such as cost, durability, and power output. Is the approximately 10% reduction in power worth the many extra years of durability? Almost certainly, and the math can tell you for sure.

Check out these related stories on solar energy and other community-led energy initiatives:

Lonny Grafman is an Instructor of Environmental Resources Engineering and Appropriate Technology at Humboldt State University; the founder of the Practivistas full immersion, abroad, resilient community technology program; the Advisor

Lonny Grafman is an Instructor of Environmental Resources Engineering and Appropriate Technology at Humboldt State University; the founder of the Practivistas full immersion, abroad, resilient community technology program; the Advisor and Project Manager (and at times fundraiser) for the epi-apocalyptic city art projects Waterpod, Flock House, WetLand, and Swale; the managing director of the north coast hub of BlueTechValley, supporting energy saving entrepreneurs; the director of the AWEsome Business Competition for groups working on Agriculture, Water and Energy in Northern California; and the Founder and President of the Appropedia Foundation, sharing knowledge to build rich, sustainable lives. Lonny has taught university courses and workshops in dozens of countries. He has worked, and led teams, on hundreds of domestic and international projects across a broad spectrum of sustainability - from solar power to improved cookstoves, from micro-hydro power to rainwater catchment, from earthen construction to plastic bottle schoolrooms. Throughout all of these technology implementations, he has found the most vital component to be community. His first books, To Catch the Rain and Atrapando la lluvia, cover inspiring stories of communities coming together to catch their own rain, and how you can do it too. His 2021 book To Catch the Sun, co-authored with Dr. Joshua M. Pearce, helps communities to implement DIY solar solutions.

Dr. Pearce is the John M. Thompson Chair in Information Technology and Innovation at the Thompson Centre for Engineering Leadership & Innovation. He holds appointments at

Dr. Pearce is the John M. Thompson Chair in Information Technology and Innovation at the Thompson Centre for Engineering Leadership & Innovation. He holds appointments at Ivey Business School, the top ranked business school in Canada and the Department of Electrical & Computer Engineering at Western University in Canada, a top 1% global university. His research concentrates on the use of open source appropriate technology (OSAT) to find collaborative solutions to problems in sustainability and to reduce poverty. His research spans areas of engineering of solar photovoltaic technology, open hardware, and distributed recycling and additive manufacturing (DRAM) using RepRap 3-D printing, but also includes policy and economics. His research is regularly covered by the international and national press and it is continually ranked in the top 0.1% on Academia.edu. He is the editor-in-chief of HardwareX, the first journal dedicated to open source scientific hardware and the author of the Open-Source Lab: How to Build Your Own Hardware and Reduce Research Costs, Create, Share, and Save Money Using Open-Source Projects, and co-author of To Catch the Sun, an open source book of inspiring stories of communities coming together to harness their own solar energy, and how you can do it too!