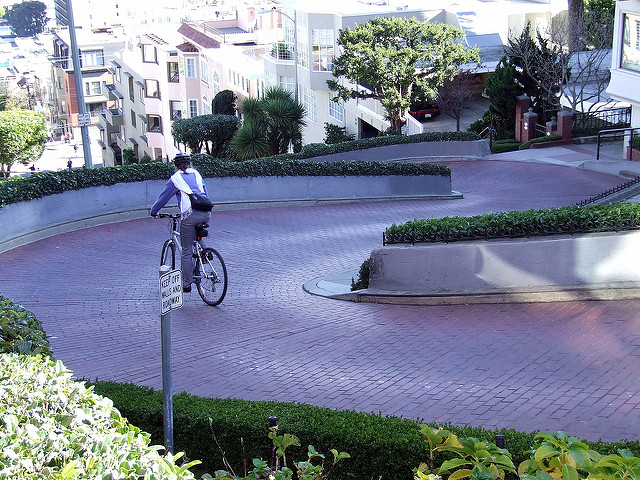 One would think San Francisco and bike sharing would be a match made in heaven. To some extent it is, but like all relationships, it isn't without friction. In the past few years, the city has been steadily increasing its biking infrastructure, earning the title of the second most bike-friendly city in the U.S., from Bicycling magazine (Chicago took first place). So when BlueGoGo, a company based in China, announced that it's bringing its dock-less, GPS-enabled bike-sharing system to San Francisco in January of this year, one would have expected a warm welcome. Instead, the company is reportedly hitting the brakes on its plan.

So why did things go downhill? When word spread that Bluegogo may be using the same strategy that it did in China — placing thousands of bikes on the city's streets, the San Francisco Board of Supervisors weren't thrilled. What riled them was where Bluegogo's bikes would potentially end up. They assumed the bikes would be scattered about the city, as KQED News reported:

Bluegogo says it will place its bikes only where bicycles may be legally parked and that users will be instructed to do the same. But San Francisco city officials, led by Supervisor Aaron Peskin, have painted a scenario in which abandoned Bluegogo bikes could wind up piled on city sidewalks and other public spaces.

In short, San Francisco lawmakers were tired of being taken advantage of by companies that launched their services without following protocol.

"Every time these arrogant tech companies ask later for forgiveness or ask later for permission," Peskin said, during a press conference in January. "This is the first time San Francisco is getting out in front."

The Supervisors brought up the issue of BlueGoGo's launch and expansion model in China, in which huge numbers cheaply-made bikes are rapidly placed in cities, sometimes resulting in large, messy piles. But San Francisco is a very different type of city than Shenzhen — besides being much smaller, there are different rules and regulations here about the use of public space by a private entity.

The other issue was the timing. Bluegogo's staff reached out to city planners a month ahead of their planned launch — which to them seemed like plenty of time — but it wasn't for the city.

"There was a problem in communicating," Ilya Movshovich, BlueGoGo's North America vice president for operations, said. "The people we reached out to initially were not the people we needed to get to. We didn't quickly enough communicate with the appropriate heads."

The company said it wasn't planning to follow the same protocol as it did in Chinese cities. Instead, in San Francisco, it would have fewer bikes, focused on underserved neighborhoods, with users leaving bikes only in designated areas.

Dock-less bike-sharing is not new to the U.S., or even the Bay Area. A similar, albeit smaller, system exists just down the peninsula in San Mateo, using technology from the New York-based Social Bicycles. One of Bluegogo's aims was to bring bike-sharing to a wider segment of the city's population.

"The current system's bikes are very costly, and not in all neighborhoods," Movshovich said. "We can quickly bring [bikes] to communities that could really benefit."

Regardless of what good intentions that company may have had, the city's lawmakers weren't moved by it.

"In the end, [BlueGoGo] is going to use the public commons for their financial gain at a great cost to the citizens of San Francisco," Peskin said. "They can't use San Francisco as an experiment lab, and our citizens aren't guinea pigs."

The San Francisco Metropolitan Transportation Agency (SFMTA) sent the company a letter inquiring about how it plans to operate in the city:

SFMTA RE: Bluegogo by San Francisco Examiner on Scribd

"San Francisco has historically been known for its welcome mat, but in recent years we've let ourselves become a doormat," Peskin added. "It's time to put the public's interests first, even if that means disrupting the disruptors."

What happened with Bluegogo is a case study in how mobility companies, even ones that may have altruistic goals, can lose their path when they don't work in collaboration with the cities they're entering. San Francisco and its surrounding cities are in need of more bike-sharing services. Other cities such as Washington D.C., New York City, and Chicago already have robust bike-sharing systems. In San Francisco, the city-approved system Bay Area Bikeshare is still only operating about 30 stations in the downtown San Francisco area — though the company is in the midst of a massive expansion.

So what's the lesson here? The importance and need for collaboration. City officials must be looped in and on board when companies like BlueGoGo that are seeking to improve mobility want to launch their services. This means a longer lead-in time before launching, and genuine, meaningful outreach on both sides.

On a broader scale, as cities develop policies for sharing enterprises, there's a value in involving city residents in the process, as Barcelona did last year. With the help of democracy activist and researcher Mayo Fuster Morell, the City Council crowdsourced Barcelona's sharing economy policies in an effort to take their needs into account. Not all cities can emulate Barcelona's approach, of course, but it's one idea that will help both cities and sharing enterprises ensure that their services and practices are fair and focused on users rather than rapid growth and profits.