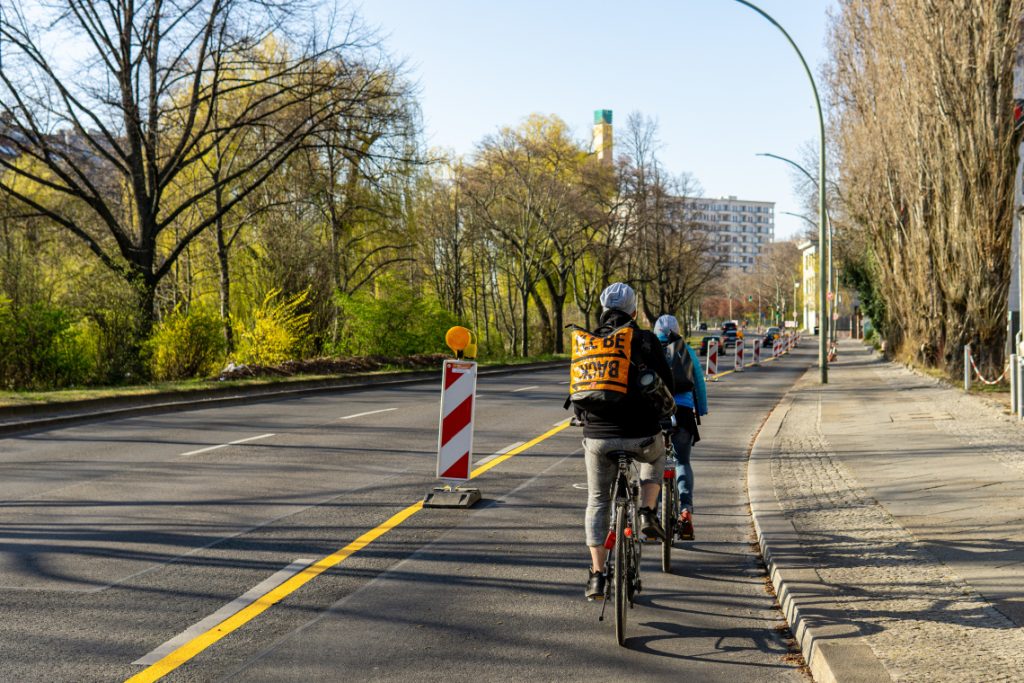 In August of 2022, activists with California’s Bike East Bay set up temporary protected bike lanes in three locations across the city of San Leandro in just under 24 hours. They used their own tools, markings, and supplies. The collective effort cost around $20,000 and was a part of a larger attempt to secure city funding for permanent bike lanes as well as drum up citizen support for other ongoing projects that would increase pedestrian safety and transit equity within the city.

Taken in an individual context, the project — which was a resounding success — proves remarkable, but it also tells a larger story about a growing phenomenon: guerilla urbanism.

What is guerilla or ‘tactical’ urbanism?

What guerilla urbanism looks like in practice varies by community and need. Here are a few examples:

While it’s still being shaped and defined, the growing movement around guerilla urbanism highlights key lessons in how we can safely build, shape, and sustain more fulfilled autonomous communities. What lessons can we learn from these community innovations?

Jane Jacobs, an active citizen-turned-urban theorist, described in her acclaimed book The Death and Life of Great American Cities how the orthodox planning processes that have dominated much of the last century have led to the decline of urban life for average citizens.

In opposition to the established approach to urban development, Jacobs pushed a bottom-up approach that centered on the needs and perspectives of working-class people. She championed smaller blocks; the innovative use of existing urban infrastructure; pedestrian-centered transit systems as opposed to car-dependent planning; and the importance of diversity in urban demographics and mixed-use buildings within the city.

Unfortunately, for many North American cities, the current urban reality reflects the ills Jacobs rallied so hard against. Social isolation, urban decline, and curtailed mobility are all still evident. On a systemic, structural level, fixing these issues often is not a priority because the people they affect most are not a priority.

A lot is being done to address these issues, with many up-and-coming urban planners and developers focusing their work on promoting equity, inclusion, sustainability, and circularity. But as we continue to reimagine our cities and the ways we can improve them, challenges persist. How can community-led innovations fit into this work? And what role can activated citizens play in addressing these ongoing challenges?

While legislative wins can lay the necessary groundwork for incorporating safety measures on the structural level, they aren’t the end-all-be-all for communities. Active citizens contribute much to the conversation around citizen safety and community needs. As transit expert Tamika Butler explains in her lecture “Transportation Inequities: What’s data got to with it?,” “you can do planning without a planning degree.”

People are the experts in their communities, which means they know past successes and failures and can identify priorities for improvement. “The homies hanging out on the corner every day, just chopping it up, can tell you everything you need to know about the speed of traffic on that street and whether or not the stop sign or the speed bumps are effective,” Butler explains.

Guerilla urbanism champions the idea that the shaping of urban life doesn’t end on the structural level. To some extent, we all have the agency to act as informed and engaged citizens, crafting innovative solutions to the problems that plague us specifically.

In his article “Guerrilla urbanism: urban design and the practices of resistance,” Jeffrey Hou points out the growing momentum around guerilla urbanism, examining the linkage “between everyday struggles and organized resistance.” In practice, the community action and innovation that define the guerilla urbanist movement have often arisen in response to either intended or unintended structural failures.

Specifically in communities facing urbanized disenfranchisement, the rise of urbanist intervention signifies the solidified effort of local citizens to reclaim their communities to better serve and protect their neighbors and themselves.

In LA, activists with Open Acres have begun mapping vacant lots that lie dormant across the city. Combining their efforts with other local organizations, their work has led to the creation of parks and walking paths on what would have been unused urban infrastructure. Green Guerillas is a collective of urban gardeners and activists based in New York City. They provide education, organizing capacity, and advocacy to residents attempting to establish community gardens and grow food either on their stoops or in other unused municipal-owned spaces.

Both of these examples highlight communities that have circumvented the need for governmental action, activating autonomously and collectively to meet a specific need in their communities: safe recreational areas for children in LA and food sovereignty for working-class people in NYC.

On the tail end of her aforementioned lecture, Tamika Butler states: “as folks who care about any type of planning, any type of issue facing the city, we have to realize that progress comes through struggle.” In essence, the struggle that she speaks of is all of ours because our cities — our streets, our paths, our shared community spaces — belong to us. As such, it’s our responsibility to sustain them, protect them, and make them better, whether or not our local elected officials consider them a priority.

Look around your neighborhood. Are there safe transit pathways for cyclists, pedestrians, and small children? Does the average resident have access to any form of shared green space? Can you identify any existing infrastructure that could be co-opted to fulfill a community need?

Asking these questions can help us identify pitfalls in our individual urban realities, but the most important question remains: What is to be done about it?

If you’re up for the challenge, here are some resources to help you and others to get mobilized in your network to answer that question:

Check out these related Shareable articles and resources: