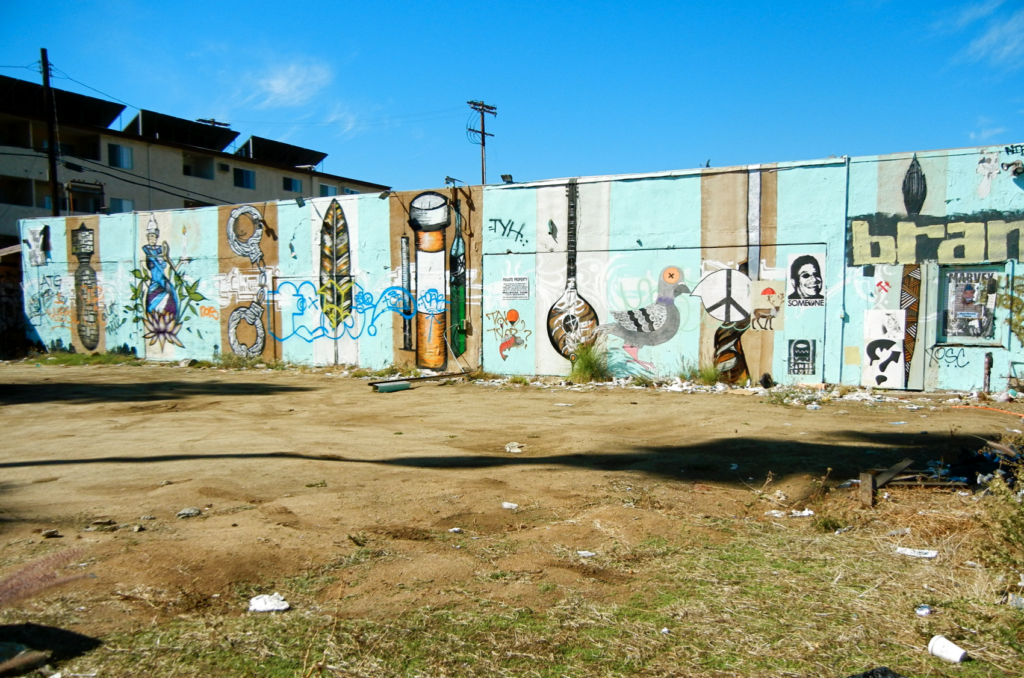 Across Los Angeles, tens of thousands of empty lots sit vacant. They’ve been there since the Watts Riots of 1965, and have become dumping grounds for trash, makeshift tent sites for the homeless, and are often vandalized.

Now, a growing array of citizens, contractors and community activists are reimagining the ways the lots can be utilized—with solutions ranging from temporary housing sites to plots for shared gardens.

One of the first hurdles to addressing the issue was simply identifying it. For years, there was no central map or database that interested parties could use to locate (and subsequently develop) the vacant lots. That changed recently when Community Health Councils launched their project LA Open Acres.

The Open Acres project map came to fruition, partially courtesy of a collaboration with 596 acres, which has created similar database projects in other cities. A labeling project 596 acres orchestrated in New Orleans even contained information explaining who visitors could call for more information on the lots and leasing options.

The mapping initiative has led to progress, with parks and walking paths being developed on some of the lots. In South LA, Serenity Park is one such success story that came about through efforts by local activists and Community Health Councils. Meant to be utilized as a communal recreational space, the park has state-of-the-art play structures for children, and also houses exercise equipment for adults.

So, the need is there, and nonprofits have proven plans for solutions. Why does the vacant lot problem persist?

Matt DiBara, the “Undercover Contractor,” is an LA-based masonry business owner, and author of a book and podcast by the same name. Clients have hired him to build walls and foundations for projects on the lots, both to improve privacy and security, and for business owners attempting to develop them. He says that neighbors sometimes pitch in to mow grass and remove trash, but “it’s tough” navigating the lots’ existing conditions.

He attributes the vacant land dilemma to what he calls the “broken window theory.”

“…As soon as there’s one broken window, if the city patches it right away, it sets the precedent that broken windows aren’t allowed here,” he says. “If they don’t, the psychology becomes, ‘Okay, this isn’t a big deal.’ Then there are more broken windows.” He says similarly, people are accustomed to seeing trash-ridden empty lots, and city council members have grown accustomed to the complaints they get about the lots. “The standard has slipped,” he says, calling that the “root root root issue.”

This inaction and complacency on the part of the city has made it difficult for folks to navigate both compliance and development opportunities. “In my conversations with developers I haven’t found the city to be overly accommodating…there’s a lot of bureaucracy,” DiBara said.

Utilizing the lots for temporary housing

On the flip side of this issue is a more systemic problem: houselessness.

In 2022, the greater Los Angeles area saw a 16% increase in homelessness. Coalitions like the Los Angeles Homeless Services Authority, say that rehousing efforts do work (88% of people who were rehoused in 2018 never returned to the streets), and these lots can become a part of the solution.

Aside from parks, the parcels have long been part of a vision by local organizations trying to solve the homelessness problem. Elizabeth Funk, Founder and Executive Chairman of Dignity Moves, leads interim supportive housing initiatives that have succeeded in other California cities. The tiny portable houses can be set up very quickly, using vacant land, and are temporary, so when someone buys the property and it’s developed, they can be relocated with a forklift. The only thing they need? Permission. She says it’s an easy ask that’s held up by bureaucracy. The city, to her knowledge, already has money set aside for utilities on the properties, and many are already set up for that.

“They don’t know what they own, and they don’t know how to get permission, and to get permission to borrow it takes some act of council,” she says. “We aren’t asking for it for long.” Their goal is to move into LA next year, easing the strain the pandemic caused on traditional homeless shelters, where the virus can run rampant.

Speaking up for government action

To clear the way for these groups to be “allowed” to use the lots for the community’s benefit, LA residents have to make their requests known, a mission that Ben Tyson, Director of Rise Together, a nonprofit working to inspire and educate voters, is pursuing.

He says people in LA suffer from the “California effect,” meaning they think their voice and vote won’t matter. “Homelessness, affordability, and crime — We know from our polling that over 90% of Los Angeles voters believe that some combination of those three issues …are the top issues in the city,” He points to policy failures over the past 10 years leading to the homelessness issues and lack of leadership over land, saying that they haven’t truly had a comprehensive plan to address homelessness since 2015, but nobody knows where the $1.2 billion allocated to the homelessness problem has really gone.

“Now we need to have the voters vocalize in order to hold them accountable [saying] ‘Hey this is not the way things are anymore. We’re going to demand a better of you in the future,’” he says. “Politicians respond to that.”