What are the Economic Effects of Bike Sharing? - Shareable
Skip to content 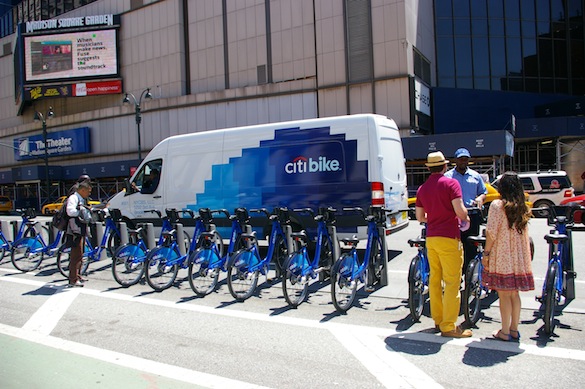 New Yorkers are known as a tough, angry, unwelcoming crowd, and also known as an open-minded, diverse, and future looking group. These two visions of New Yorkers have collided over the new bike sharing program which launched yesterday. The New York Post complained incessantly about the presence of the new bike stations, predicting it would be a dangerous traffic apocalypse, and many Facebook posts were circulated where New Yorkers hysterically compared the coming of the bike stations to infamous historical tragedies. Other New Yorkers were excited by the prospect of NYC joining the dozens of world capitals that have a bike share program.

The New York Post, the reactionary rag of note in NYC, ran stories about bike-shop owners who thought the bike share would be death for their business, and covered any anti-bicycle protest they could find, which were tiny and largely held by residents of wealthy neighborhoods. But this is just the newest volley in another “war” in New York between bikers and drivers, one which the Post has gleefully fomented: bikers are bad for business, they argue, a nuisance and dangerous to boot.

Bikers, on the other hand, argue that they have just as much a right to the road as everyone else, and that drivers who are unaware put their lives in danger, not the other way around. For the last ten years, the bikers have been winning this on the policy side, with a massive expansion of bike lanes and the number of bikers (which has also been encouraged by the fast rising fare increases of the bank-indebted MTA and the broad damage to New Yorkers done by the recession). According to the DOT, bike commuting in New York has doubled since 2009, and the bike sharing program can only increase this trend.

I can’t refute all of the Post’s arguments here, but in traffic-choked Manhattan, the presence of the bikes may well be a blessing. In Denver, where the B-Cycle sharing program was instituted, there were 102,000 rides in the first 7 months: and 43% of Denver users reported they were replacing car trips with bike rides. Paris saw a 70% increase in bike use and a 5% reduction in traffic and congestion thanks to its Velib’ program—and those changes happened in the first year of its operation.

Although it’s incredibly hard to quantify the direct effects on businesses of any small change in transportation availability, it’s hard to imagine this will kill bike shops. The number of bikers has been increasing steadily in New York City, and bike sharing programs tend to encourage people who don’t consider riding—tourists, short-distance commuters, and people running errands tend to be their main users—to take a bike.

It seems highly unlikely that having more people regularly biking will decrease demand for bikes and bike services, or that the bike sharing program will create a monopoly. It seems just as likely that these former non-bikers, after using CitiBike but unhappy with the clunky bikes and occasional inconveniences (New Yorkers are a status conscious bunch after all) might well buy bikes of their own.

In any case, the bike program is up and running. In classic NYC style, a bike was stolen Sunday night, before the program had even begun. Yesterday riding around Brooklyn I saw three people on the bikes, including one guy going the wrong way on a one way street and looking a little concerned. We will have to wait and see what effects it has on the city, but it seems to me it can only be good news.

At least, as long as those damn tourists don’t clog up the Williamsburg bridge bike path!