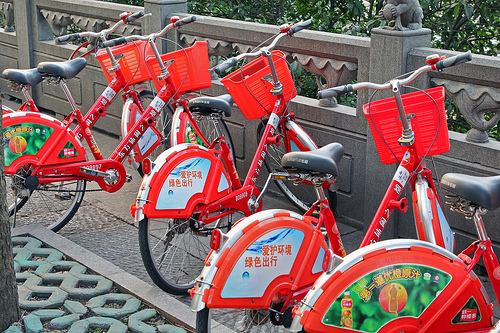 Hangzhou’s bike-sharing system has twice the number of bikes as Paris’s Velib system, probably the best-known system having catalyzed the growth of bike sharing with a breakthrough success after launching in 2007. This is impressive given the two cities have approximately the same population. Here’s more on the system from the reliably inspiring Streetfilms:

The 50,000-bike system in this southern China city of almost 7 million people (about 1.5 million people fewer than New York City) blows all other bike-shares off the map. As Bradley Schroeder of the Institute for Transportation and Development Policy said, “I don’t think there is anywhere you can stand in Hangzhou for more than a minute or two where you wouldn’t have a Hangzhou Public Bike go past you.”

Hangzhou’s 2,050 bike-share stations are spaced less than a thousand feet from each other in the city center, and on anaverage day riders make 240,000 trips using the system. Its popularity and success have set a new standard for bike-sharing in Asia. And the city is far from finished. The Hangzhou Bicycle Company plans to expand the bike-share system to175,000 bikes by 2020!