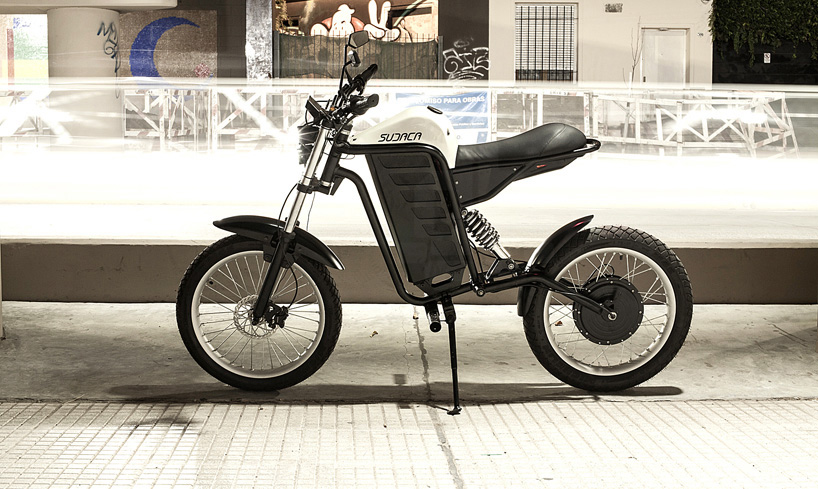 Like similarly crowded megacities, Buenos Aires is chock full of people struggling to get places. And going from here to there often requires a noise-making, gas-guzzling, pollution-emitting vehicle of some sort. But the lean, green Sudaca electric motorbike hopes to change that.

Created by student designers Guillermo Callau, Federico Ferreyra, Mariano Filippini, and Fermin Indavere at the University of Buenos Aires and named after a derogatory term for South Americans, the sleekly built, rugged-looking Sudaca takes its cues from Motocross bikes. Instead of an engine, it has a battery and, instead of a fuel tank and an exhaust pipe, it has a charging dock and a back light, respectively. Utilizing an in-wheel motor, the bike is intended for urban use — particularly commutes of 20 or fewer miles per day. The team, explaining their goal to the Core 77 Design Awards judges, wrote, "We set out to build a lightweight, affordable, and simple to use vehicle for urban transportation for the years to come… A means of personal transportation that is comfortable, easy to manufacture, maintain, and use by the average city dweller."

There are no extras or excess, no fuss or muss about the slim, 175-pound Sudaca because the designers believe that a "vehicle shouldn't weigh more than the person it is carrying…excess weight is a waste of energy no matter how the vehicle is fueled."