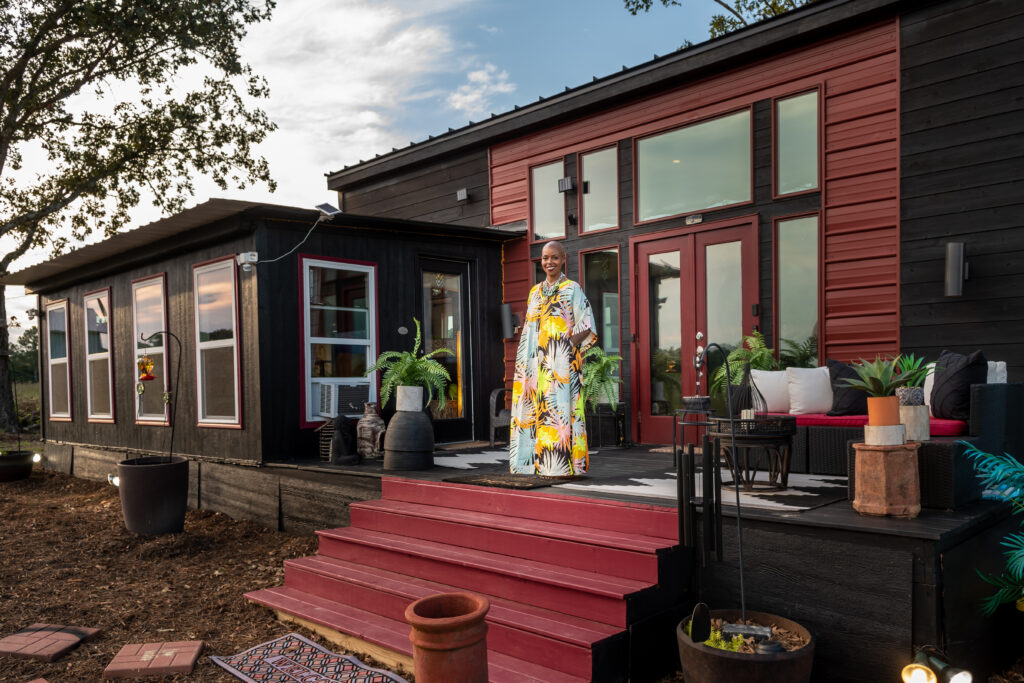 Tucked away on a farm outside of Charlotte, North Carolina, Jewel Pearson is living her dream — one that has been in the making for more than two decades. In 2015, she downsized her life into a less than 500-square-foot tiny house on wheels.

“I whittled down to all my favorite things,” said Pearson, whose tiny home has been featured twice on HGTV, and in many publications.

Yet Pearson’s seven-year tiny living journey hasn’t been easy. Finding a space to park her home has been one critical issue. She would prefer urban surroundings, but tiny homes have yet to be fully accepted as official dwellings in most U.S. cities. And, as a Black woman in a space that’s predominantly white, she has had her fair share of frightening racist encounters that have raised safety concerns and led her to move her tiny home twice.

Instead of giving up on her dream lifestyle, Pearson leaned in and launched Tiny House Trailblazers in 2016 to advocate and create a safe space for other Black tiny home owners – and inspire Black and Brown people to pursue and achieve their own tiny living dreams.

We deserve to be here in the movement and be safe while here. — Jewel Pearson, Tiny House Trailblazer founder

Pearson is a product manager in the education technology industry by trade. To create spaces of inclusivity, she’s launched several initiatives including a cooperative between current and future Black tiny home owners and Black farmers. She has also offered webinars and workshops to share her experience and spread the word about tiny living.

“I always say we’re holding space and ensuring representation in this movement,” she says.

Tiny home living, and even nomadic lifestyles, date back for centuries among people of many cultures. The history of the current modern-day tiny house living kicked off in the 1980s, with the movement gaining more momentum by the late 1990s. Over the following decade, that led to a growing number of tiny home designers and builders, as well as DIY television shows, blogs, articles and books dedicated to the nomadic lifestyle.

Following the 2009 housing crisis and the resulting surge in foreclosures, the movement took off as the cost of a tiny house is one-fifth that of a traditional home. The National Association of Realtors expect to see “incremental growth” in tiny home sales, reaching $5.8 billion by 2026.

Tiny houses caught Pearson’s attention in 2013 when she saw the story of architectural designer Macy Miller, who is considered one of the pioneers within the modern-day tiny home movement.

For almost two years, Pearson researched and designed her house (which was originally 360 square feet before a recent renovation to add a sunroom). She later began hunting for a builder open to the idea of developing her tiny home on wheels–some of whom told her that her design couldn’t be done. She eventually found a builder who was willing to take on her plans.

“What I have learned about Jewel is that she doesn’t do anything willy nilly,” said Miller who has since become a close ally with Pearson to create a more inclusive environment. “Everything has a reason.”

Indeed, Pearson began downsizing from her traditional four-bedroom home over the course of 10 years — moving into a one-bedroom apartment the year before building her tiny home. Upon her final move in 2015, she acknowledged finding a location to park her new home seemed to be just as challenging as building it.

“Most cities and counties don’t allow tiny houses on wheels [due to zoning rules],” said Pearson. “The areas that are most accepting of tiny houses are RV parks, farms and more rural locations, which aren’t always safe spaces for Black people and people of color.” Within months, Pearson discovered that firsthand.

I realized my tiny house experiences were going to be quite different from my [white] counterparts simply because of my race.

There were questionable encounters with fellow neighbors at her initial RV park that resulted in the first of two moves. She eventually landed a spot on a rural farm, a quieter space. Someone, who trespassed onto the property, was arrested for “racial intimidation” against her. Even within the tiny home movement, she’s contended with issues including receiving a threatening email from a fellow tiny home owner.

Her experiences were largely ignored or downplayed by those within the movement.  “As I shared and raised my concerns, I also soon realized it wasn’t anything my counterparts were interested in including and/or acknowledging within the larger tiny house community discussions.”

Thus, Pearson created her own platform to have these discussions and much more. To join in her effort, she invited visual artist Dominique Moody, who built her tiny home in 2011. Known as the NOMAD, Moody’s tiny home has been on exhibit at the California African American Museum (CAAM).

The two first met virtually, and soon began collaborating on how to address the lack of diversity within the movement.

We felt that there was a need for a space where we could discuss the things that weren’t really being discussed in the more general arena of tiny house living. Tiny House Trailblazers became the space where we could encourage others to join in on these conversations and fellowship. — Dominique Moody, visual artist and Tiny House Trailblazer partner

In the spirit of ujamaa — which is Swahili for extended family — the Cooperative Communities project offers Black tiny home owners access to safe locations to rent and park their tiny homes. At the same time, the initiative provides a new income stream for Black farmers, who’ve lost $326 billion in land value caused by decades of state-sanctioned discrimination.

Black farmers and landowners within the cooperative are located in North Carolina, Virginia, Alabama, Texas, Tennessee, Mississippi and Arkansas.

Pearson has also launched the Collective Communities project, which is in the spirit of ujima — the third principle of Kwanzaa: collective work and responsibility.

The collective offers Black tiny home owners, van dwellers and RV travelers easy access to a list of Black-owned RV parks, campgrounds and meet-up spots, as well as privately owned luxe hotels and inns. The list was developed by the camping group African Americans That RV & Camp (AARVC), and it’s reminiscent of the Negro Motorist Green Book, a guidebook that was originally published in 1936 and helped Black people safely travel during the Jim Crow era.

Pearson also offers consultations and hosts a weekly show on her YouTube channel to help others determine their own journey and process toward building a tiny home. She has held workshops and webinars with Moody and Lee Pera, founder of Kotierra and the former Boneyard Studios tiny house community. In October 2020, Pearson and Pera hosted the symposium “Tiny Houses, Land & Housing Equity,” exploring the explicit inequities within home and land ownership among communities of color. They also laid out unconventional strategies to reach home ownership.

“There are so many people who’ve said to me, ‘until I saw you, I didn’t know that this movement was even for Black people,’” said Pearson.

As a tiny home advocate, Pearson’s key mission is focused on helping communities of color to live the dream of homeownership and building wealth through non-traditional means. While the rate of homeownership within the Black community rose to 43.3 percent in 2020, it continues to lag behind other communities, according to the National Association of Realtors. White Americans, at 72.2 percent, were among the largest share of homeowners.

Nothing the systemic barriers that continue to push Black people out of traditional housing markets, Pearson understands the enduring allure of obtaining arbitrary signifiers of traditional success.

Many of us are still chasing that dream of what society says success looks like in our mind. [The idea of success as] big – a big house, a big car.

Pearson’s tiny home, an eclectic mix of luxury that celebrates Black culture, has so many windows that it creates an open concept featuring two lofts, a large bathroom with a tub and shower, a floating stairwell, a walk-in closet, and the recent addition of a sunroom. “The tagline for my home is: ‘You don’t have to give up luxury to go tiny.’”

Many have asked Pearson what steps to take to reach their own tiny living aspirations. Doing extensive research is critical, she said. “The last thing I want somebody to do is spend $100,000 on a tiny house and not be aware that on top of known problems with placement, you’re going to potentially have trouble with issues of racism.”

As more communities of color join the tiny living movement, Pearson is pushing to expand the Cooperative Communities project. She adds that she’ll continue to educate and inspire others to join the movement.

Pearson holds steadfast in her belief that tiny homes can be the answer to a persistent lack of affordable housing and home ownership, especially among communities of color. This paradigm shift away from traditional home ownership includes finding ways to reimagine housing, community development and land ownership, providing communities of color even greater ability to build wealth.

“Racism isn’t going anywhere, unfortunately,” Pearson said. “I’d like to see Black and Brown communities really view tiny houses and this movement as a viable option for quicker access to homeownership and generational wealth building. Racism cannot be the reason we’re not in the movement.”

Check out these related articles and resources: