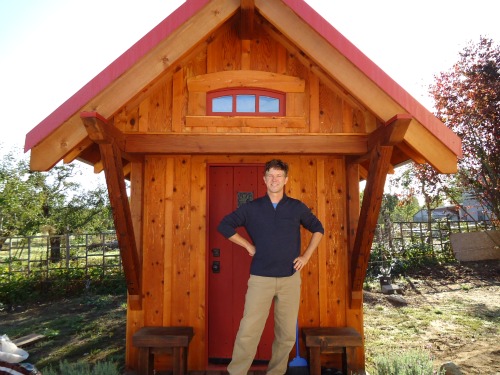 Americans live in a country in which bigger is often supposed to be better. Perhaps this is why our homes, like our food portions, waistlines, and debt, continue to expand. The average American home has more than doubled since the 1950s, growing from 983 square feet to 2,349 square feet. Nine foot ceilings, four car garages, and private bathrooms for every person have all become increasingly common, making those Brady Bunch kids seem all the more deprived for sharing their bedrooms with—gasp!—two other siblings. And one bathroom for six kids? To people like former White House correspondent Michael Frisby, who relishes his 11,000 square-foot home so big he can’t hear his kids scream, this might as well be a form of torture.

But the rise of the McMansion—and its attendant conspicuous consumption—has also helped to create the burgeoning tiny house movement, which extols the virtues of living smaller. Like Henry David Thoreau, who built his own 150 square-foot cabin on Walden Pond in the 1840s, most tiny house aficionados cite the sheer satisfaction of paring down to the basics, choosing, as he put it, “to front only the essential facts of life.”

The allure of living in something tiny—like, say, a shoe—has long held romantic sway in our imaginations. Who doesn't love the aesthetic preciousness of dollhouses, or for that matter, those amazing space-maximizing, nook-and-cranny-exploiting rooms at IKEA? And how many of us have thrown a few items in a backpack (or dreamed of it) and wandered turtle-like through foreign terrain, unburdened by the weight of home? A man in Berkeley recently turned a dumpster into a home so nice it would make even Oscar the Grouch crack a smile.

A year ago Gusty and Jason decided that they wanted to downsize their possessions, leave Brooklyn, and take to the road. They also wanted a stable home base for Silas, their three year-old son. And so, thanks to Craigslist, the couple found Julie Martin, a woman in Mississippi looking to sell her 8X17 foot tiny house, which she'd lived in since Katrina destroyed her old Victorian. They paid $16,000—just a fraction of the $244,000 that the average American spends on a house—and towed it across the country, landing at Green Valley Village in Sebastopol, California, where it cost them 300 dollars a month to park their home.

The mastermind behind its design is Jay Shafer, the creator of Tumbleweed Tiny House Company, which sells 23 different floor plans for houses ranging from 65 to 837 square feet. Shafer built his first tiny house (110 square feet) in Iowa in 1999, and lived in it for five years before moving out to Sonoma County, California, where he built himself another, even tinier house—7 by 10 feet, smaller than many people's bathrooms.

“My definition of small is one in which all the space is being used well,” Shafer tells me on a recent morning. We're sitting on two plush chairs in the cathedral-ceiling great room of his tiny house, which now serves as his office space (after he and his wife had a baby a few years ago they moved into a 500 square foot house on the property). “I deliberately made the doorway small,” Shafer explains to me, “to create the feeling of space after you walk through it.” Indeed, I can’t help but notice that everything is artfully, brilliantly deliberate. There’s the vertical stainless steel bathtub (designed by wine cask-makers) and the sleek composting toilet, the scaled-down kitchen appliances and cozy sleeping loft, and my favorite—the secret double-door closet where Shafer hangs his neat, penciled blueprints.

As a kid living in a 4,000 square foot trophy house in Iowa, Shafer spent hours vacuuming pastures of unused space; he envied the kids who lived in smaller, cozier homes. After studying painting in college, he called a number of small spaces home: a dome made of pine, the basement of an apartment building, an uninsulated 1964 Airstream, and sometimes, for the night, the backseat of a car. Inspired by “religious architecture and vernacular common sense,” Shafer began designing tiny houses for fun, until he discovered that they violated state building and zoning codes. “Once I found out that living in a small house was actually illegal in the United States,” he tells me, “then I had to do it.”

Despite his Zen-like calm, Shafer is enraged over the paradox that banks deny people loans for tiny (read: affordable) houses while simultaneously selling them too-big homes that become “debtors’ prisons.” After struggling to pay the mortgage, people find themselves at the mercy of foreclosures. “Then there are the bail-outs,” says Shafer, “which means everyone eventually pays.”

Not only do banks refuse to finance tiny houses, most state laws mandate that the smallest a legal house can be is 220 square-feet, in order to “keep the riff-raff at bay and to protect property revenue,” says Shafer. Indeed, given the shameless corporate green-washing of the past two decades, it’s ironic that banks continue to enforce what Shafer calls “mandatory consumption laws.” After all, the bigger the house, the bigger the consumptive pattern, the more there is to heat, cool, furnish, clean, decorate, and insure.

On the other hand, living small helps to thwart corporate greed and, given the space limitations, actually makes consumption a barrier to good living. When Shafer switched to living tiny, he got rid of all unnecessary accumulations, including his artwork. “I took pictures of everything,” he says, and then, too impatient to even sell the paintings, “I took them to the dump and watched them get buried by a tractor.” Shafer believes that disentangling from “the secular idolatry” of things makes people happier. “Getting to know oneself,” he explains, “is largely a subtractive process.”

A self-described “claustrophile,” Shafer might be one of the few who's actually benefited from the economic downturn: as money gets tighter, so do people's living spaces. His self-published tome, “The Small House Book,” has seen a sharp rise in sales, and his company currently sells about ten sets of tiny house plans a month. “We're essentially selling a dream,” Shafer explains, noting that activists and artists are his most common customers.

In fact, so big has the tiny house movement gotten that Shafer, recently profiled in The New Yorker, built a fence to protect his family's privacy. He's given workshops all over the nation, and even in Saudi Arabia, at King Abdullah University. Over 35,000 people “like” his company on Facebook. Most importantly, his ideas and designs continue to gain traction—people from Maine to Washington are building Tumbleweed Tiny Houses. A trip to Guatemala in 2003 inspired Dee Williams to live smaller. Using reclaimed materials, she spent just $10,000 building an 84 square-foot tiny house and limited her possessions to no more than 300 items total. She’s since become another mouthpiece for the movement, featured in Yes! Magazine and on PBS, and recently released her own book, “Go House Go.”

In Santa Cruz, high school junior Kendall Ronzano started NerdGirlHomes, a project devoted to “building tiny houses for a good cause, because shelter is a birthright, not a privilege.” Ronzano has spent months working on Shafer’s LUSBY design, a 117 square-foot tiny house that includes a downstairs bedroom, sleeping loft, stainless steel fireplace, and porch. The plans cost her just $859 and she has already fundraised $8,000 of the estimated $21,250 it costs to build. Even though building a home from scratch is the realization of her childhood dream, Ronzano plans to donate the house—or auction it off and donate the proceeds—to a family in need. Read about her progress (she just finished the roof) here.

So what’s the next step for Shafer? “There is definitely a demand for a small house community,” he tells me, explaining that his vision is to create a cluster of tiny houses where people can live in communion while retaining a sense of privacy. As for the legality issue, he’s found the loophole: put the homes on either water or wheels, and, in the case of the latter, the county cooperative will zone the community as an RV park. And thanks to the added height, they can take advantage of building on cheaper real estate—flood plains that offer lovely river views, for example.

After a thwarted attempt to tow a tiny house into OWS, Shafer took matters into his own backyard and hosted Occupy Tiny House on January 7, where he delivered a political tirade to about seventy interested folks from his porch. For Shafer, creating tiny houses is at once his passion and his rebellion. “It's a form of civil disobedience,” he says, “a way to creatively vent my anger.”