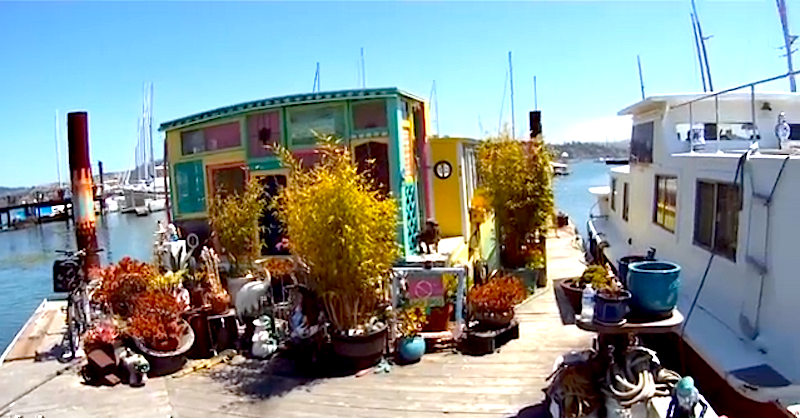 Tiny houses are definitely trending. Stimulated by the recession and increasing housing costs, as well as a desire to simplify and downsize, tiny houses are popping up in cities, rural areas, harbors, apartment complexes and more. More than just cute, simple dwellings, tiny houses are tools to help people transform their lives. For example, they’re being used to address homelessness, help folks achieve financial security, and get off-the-grid.

Inspired by a desire to learn more about this growing movement, filmmaker Kirsten Dirksen and her family took off to document tiny houses and their inhabitants. The result is the film, We the Tiny House People: Small Homes, Tiny Flats and Wee Shelters (2012). In their travels Dirksen and crew found a diverse bunch of people living all over the world who chose to ditch the more-is-more mentality and embrace tiny living.

Among those they met along the way were a 16 year-old who is building his own tiny house behind his parents’ house; a woman who built her own tiny house using repurposed materials; a breath-takingly beautiful cave home in France; a woman who moved into a 90 square foot apartment in Manhattan, had a panic attack her first night, but now loves it; a woman who grew up in the glitz of Hollywood and now lives on a wildly colorful boat, complete with an electric piano, in Sausalito; a converted pigeon coop in Barcelona and more.

Common features among the houses are that they have hidden, modular or pull-out elements and they all require a serious, if not radical, re-evaluation of one’s needs. Among the inhabitants, however, there was a shared sense that simplifying their lives and surroundings brings them newfound levels of space, joy and fulfillment.

You can watch the full documentary here:

How to Live Off-the-Grid in a Tiny House