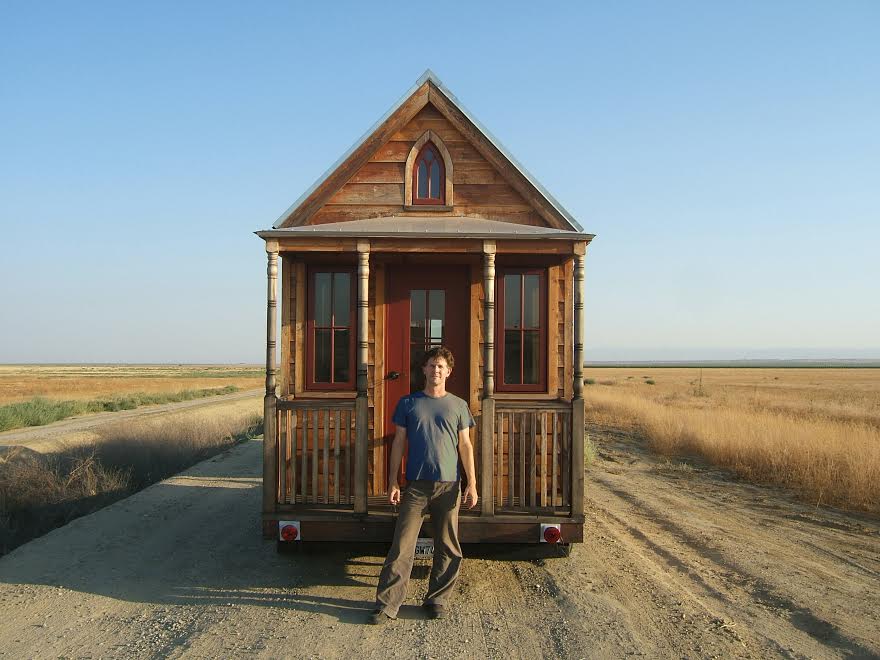 How small could you go when it comes to home? 500 square feet? 250 feet? 100 feet? For Jay Shafer, less is definitely more. Tiny house advocate and founder of Four Lights Tiny House Company, Shafer says that, unlike sprawling houses, tiny houses demand that their dwellers downsize to the essentials. He talks about tiny houses as being undiluted reflections of the people who live in them.

“A small space really is a condensed self portrait of the person living there,” he says. “But if they start putting in a lot of extras that don't relate to their real, assessed needs, then it becomes a diluted self-portrait.”

In addition to simplifying one's home, there are other benefits to going small: tiny houses are inexpensive to buy and maintain; they require less energy and have a smaller carbon footprints; and they naturally encourage sharing and consuming less.

While some define a tiny home as being 100 square feet, Shafer prefers to think of it more organically.

“A tiny house is any house in which all the space is being used well,” he says. “When my friends and I founded the Small House Society…that was our definition and we’re sticking to it.”

This perspective takes a big picture view of efficiency because, as Shafer points out, if people buy a 4,000 square foot house but put 20 people in it, that would be even more efficient than a tiny house.

The Small Lifestyle
Shafer started his tiny house adventure in 1997 when he moved into a 100 square foot Airstream. He’s lived in tiny homes for over a decade. He now lives with his wife and two sons in a 500 square foot house. He says that people are inherently attracted to having what they need, but not more.

“Necessity exists in all of nature,” he says. “People are really into the idea of what they really need to be happy and comfortable and surviving, and a small house really encapsulates that.” He adds, “Extra stuff and extra square footage dilutes a sense of vitality.”

A designer of tiny houses, Shafer sells building plans to people who want to build their own homes. He says his houses turn out looking very homey because they’re proportioned in the old fashioned way.

“In my view,” he says, “any well designed house is going to make good use of all the space. That is the primary thing I’m shooting for when I design a house.” He adds, “I’m big fan of archetypal form and I’m kind of into sacred geometry—subscribing meaning to number and form—so I play around with that with my designs as well.” 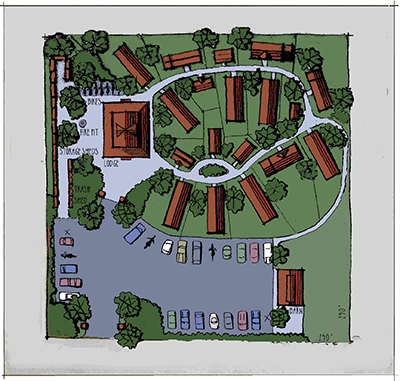 Downsizing Together
In addition to challenging people to rethink their stuff, there’s also a community angle to the tiny house movement. Downsizing dovetails nicely with the sharing movement, where relationships matter and sharing access to things like a washer, a lawnmower and a grill is better than owning them individually.

Within the tiny house movement, tiny house communities are springing up that prioritize people and connections. According to Shafer, there’s a tendency for tiny home communities to put the cars and vehicles in the back and put people first out front, with shared yards and sometimes a community house.

“This is not a new thing,” he says. “Basically, a trailer park is a small homes park, but people are interested in one that’s geared toward real community and privacy and quality; quality design, quality materials.”

In November, Shareable ran a story about a project in Austin that will provide 200 homeless people affordable, tiny housing. The story became one of the most read stories in Shareable's history in a matter of days. The intersection of affordable housings, quality of life, and community is obviously of great interest and the tiny home movement is an easy way for people to connect to it.

Within the growing community of tiny home appreciators, builders and dwellers, much of the connecting takes place online, but there are also opportunities to meet in-person. At Shafer’s workshops, where he teaches people how to build their own tiny homes, participants naturally create networks to share a warehouse or tools and stay connected long after the workshop is over. “A lot of community has actually been built within those workshops,” says Shafer.

The Legalities of Living Small
When it comes to the legalities of tiny homes, meeting building codes isn’t the biggest challenge. You can build a house of 250 square feet and still meet building codes. The biggest challenge is zoning, which prohibits certain structures from being occupied. For instance, Shafer points out that while you can put a house on wheels in order to get around minimum size standards, you can’t live on your wheels, in a trailer, just anywhere.

While more and more states are allowing for, and encouraging, accessory dwelling units, there are still issues around living in a trailer in a backyard. But, Shafer says that building officials are generally helpful in finding workarounds.

“Most of the building officials themselves,” he says, “regardless of the rules they have to enforce, are really in favor of all this stuff because they can see the merit in it and they’re eager to find loopholes with the people. For instance,” he continues, “I wasn’t allowed to live in my trailer in a residential area in Iowa City, but I could camp out in my own yard, and so I did, for five years. They were fine with that. They were trying to help me find a way around those antiquated laws too.”

Birth of a Tiny Nation
As the tiny house movement gains momentum, profit-driven corporations are jumping on the bandwagon. For Shafer, the growth of the movement is good, but it has signalled the emergence of tiny house opportunists.

“Up until a couple years ago,” he says, “it was about really people addressing their own real needs. Authenticity is part of the movement, but now you see CEOs pretending that they live in a tiny house in order to sell tiny houses, or having spokesmodels posing in tiny houses and talking about it.” He adds, “It’s encouraging in a way. I hope it doesn’t erode the authenticity too much, but it does signify some hope in terms of it spreading across a big scale.”

Shafer says his ideal would be to have the movement become more and more mainstream.

“It really is common sense,” he says, “people living with what they need to be happy and nothing more, and not being forced into what they don’t need by antiquated laws. I’m hoping that eventually it will become so mainstream that the laws will just change.”

The way Shafer sees it, the tiny house movement is about people not wanting to consume or produce more than they have to.

“It boils down to efficiency,” he says. “I could lecture on this stuff for days on end, but I could boil it down to the one sentence lecture: Tiny houses are efficient, so they’re cool. Everything else is just elaborating on that.”

How to Live Off-the-Grid in a Tiny House