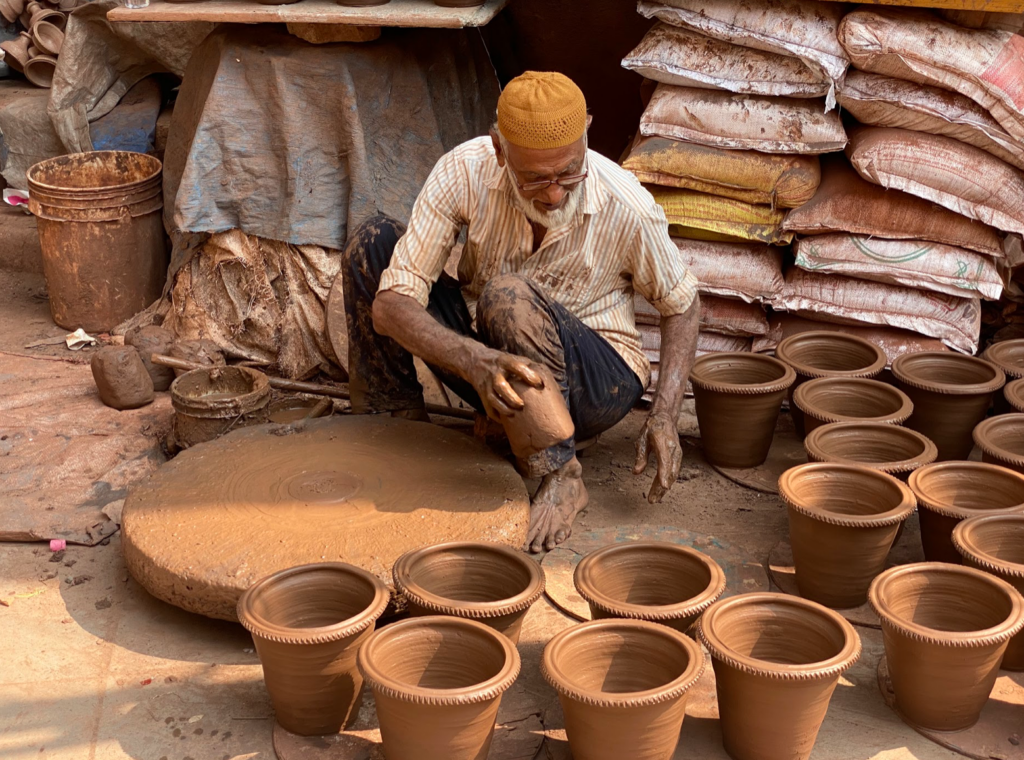 In Mumbai, India, the value of land in the Dharavi slum has skyrocketed — yet its residents live in squalor.

Developers and authorities want to move its poorest residents into new housing units, yet many locals refuse: Resettlement to an apartment in a high rise means losing their connection to the sprawling slum network; they would also lose their livelihood, since they live in the same buildings that house their shops and factories.

Some people do get away on their own terms, though their departure is bittersweet.

Back in 1988, Fahim’s family was growing. And his father had a small embroidery factory on the ground floor of his house. But crime was rampant, and authorities were pressuring locals by limiting residential access to water. By moving elsewhere, Fahim’s growing family would gain more space, privacy, and security.

Still, it was a difficult decision to move. Leaving Dharavi means leaving your part in a complex supply chain that connects to Mumbai, other cities and regions across India, and the global luxury-goods market.

Today Fahim’s father still has to come back to Dharavi regularly to find buyers for his wares and to outsource larger orders.

Dharavi is half the size of Central Park, with around a million inhabitants crammed into it — the highest population density on earth.

Roughly 60% of Mumbai’s residents live in slums, and for most of them, leaving means losing their livelihood and facing insurmountable living expenses.

Yet despite the cramped quarters, poor sanitation, and hazardous working conditions, Dharavi represents the only chance for its residents, many from disadvantaged rural backgrounds, to make a better life for themselves and their children.

Today Dharavi is most well known for its depiction in the hit film, Slumdog Millionaire, which some claim romanticizes the abject existence of slum dwellers who often have access to water once per day and at a great distance from their homes.

This was the Dharavi that Fahim remembers, waiting in line for water at 4:00 A.M. when the tap got turned on.

Fahim’s neighborhood seems to be thriving now; there is far less crime and some areas even have a common tap for water, however housing remains fundamentally unfit for human habitation.

With about 10,000 skilled craftsmen from many diverse backgrounds and upwards of 15,000 factories, Dharavi has become something of a self-organized special economic zone, with its own parallel economy. It operates outside of state control, meaning no one pays any taxes, copyrights are not enforced, and very little gets regulated.

This is what Keller Easterling, author of Extrastatecraft defines as “the Zone” — a “cocktail of enticements and legal exemptions” that might include “holidays from income or sales taxes, dedicated utilities like electricity or broadband, deregulation of labor laws, prohibition of labor unions and strikes, deregulation of environmental laws, streamlined customs,” and other pro-business accommodations.

Dharavi doesn’t have superyachts and five-star hotels, but the economy could conceivably accommodate them with annual gross sales of between $600 million and $1 billion. It’s a collaborative and innovative economy that in local parlance would be called jugaad — a way of making things happen with limited resources and an impressive level of collective intelligence.

To see it in action you just need to cross the elevated walkway over the railway lines and take a walk through Dharavi’s narrow alleyways.

One of the largest industries in the slum is recycling: waste materials are either collected by individuals or delivered by the truckload. People sort the items and dismantle them for processing. Transparent plastics, the most valuable plastic, is ground up and then sent to the furnaces to be made into pellets that are sold to external plastic manufacturers.

This final step is highly toxic, and the furnace sometimes gets shut down by Dharavi police.

The grinders they use to make the plastic mulch, meanwhile, are manufactured in another district which has a forge. Waste metals go there to be melted down and cast into new products.

In the garment district talented artisans fulfill an order for 300 knockoff backpacks that will be sold to shopping malls, or branded by distributors further down the chain. Sometimes there are orders for 1500 units, which they are able to deliver in just three days by reconfiguring the factory on the fly, and pooling resources with other producers with excess capacity to share.

Not far away there is a tannery where animal skins are tanned and dyed to be used in bags and wallets, some of which, it is rumored, wind up in Gucci showrooms.

All of these factories are under houses where families live, within yards of where people eat and sleep.

Some slum dwellers prosper. But those residents who remain in the Zone have to deal with pollution, shared toilets (there are no private bathrooms), and sickness from poor sanitation and air quality. The Sion hospital on the slum’s periphery treats 3,000 related cases per day.

”People who come to Dharavi — their priority is not health, it is earning.” says Dr. Pallavi Shelke, who works there.

The battle for better living

Dharavi actually has the highest literacy rate in India at 69%, and a politically engaged population that has successfully campaigned for regular access to water, an art school, an acting and theater school, direct market access for artisans to cut out the middlemen, and even a hip-hop school.

Local activist communities have also resisted an inequitable relocation program that would move the poorest residents into unattractive towers occupying 20% of land while reserving 80% for luxury apartments — since it’s all prime real estate in one of the most expensive cities in the world. The program has so far been on hold for 18 years.

Residents of the Zone are trying to use their political power to create a more just alternative to developers’ plans known as community land reserves, which are already found in the U.S.

The idea hasn’t been seriously considered in India yet.

The United Nations estimates that 1 billion of the world’s population is currently living in slums (about 33% of the global urban population). Some estimate that urban slums will account for well over two billion people by 2050.

In Mumbai everyone who serves you, drives you, sweeps up after you, or delivers your food is more often than not a resident of these slums. The city runs on their services and labor yet these people are living in 6’ x 10’ shanties with 7 people to a room on average.

Imagine if all the slums were resettled overnight: The richest city in India would come to a screeching halt, like California in the 2004 film “A Day Without a Mexican”.

The slum dwellers are holding out for something better — and who can blame them?