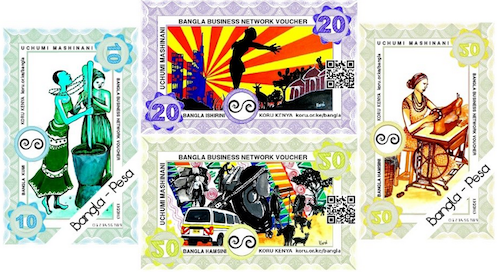 In Bangladesh, Kenya, a local currency, the Bengla-Pesa, has given a boost to local businesses, helped stabilize the community and stimulated the development of small businesses and social service projects.

Found around the world, complementary currencies connect those with needs to those with unused goods, without national tender, which can be in short supply. This means that more people have their needs met and less goods and services go to waste or sit idle.

Developed by Will Ruddick, an American physicist, economist and co-founder of Koru Kenya, the nonprofit organization that helped implement the program, the Bengla-Pesa had an immediate positive effect on the community. The program was launched in May of 2013 and the community has since seen an increase in sales of 22%. The program also earned the endorsement of several international organizations including the United Nations.

But, there’s a problem. Recently, five members of Koru Kenya, including Ruddick, were jailed on charges of planning a terrorist overthrow of the government. Charges have been reduced to forgery and Ruddick and his team have been released on bail but if they’re convicted, they face up to seven years in a Kenyan jail. The case goes to trial on July 17.

Whether they will serve time remains to be seen. In 2003 there was a similar situation in Brazil as a complementary currency called Palmas led to the arrest of organizer Joaquim Melo on charges of issuing false money. But the court sided with Melo and in the end, the government integrated the program into state policy.

Despite the charges, Ruddick is encouraged by the success the program.

“The exciting thing,” he said in a statement, “is that these systems really do show a means of poverty reduction – and my hope is that after this case we’ll be allowed to spread them to slums across Kenya. There have been years of precedent for complementary currencies as a solution to poverty, and today there is no doubting it.”

The article The Crime of Alleviating Poverty provides a good overview of the current situation. Donate to the Bangla-Pesa indiegogo campaign.  Also check out our guide on how to start a community currency here.