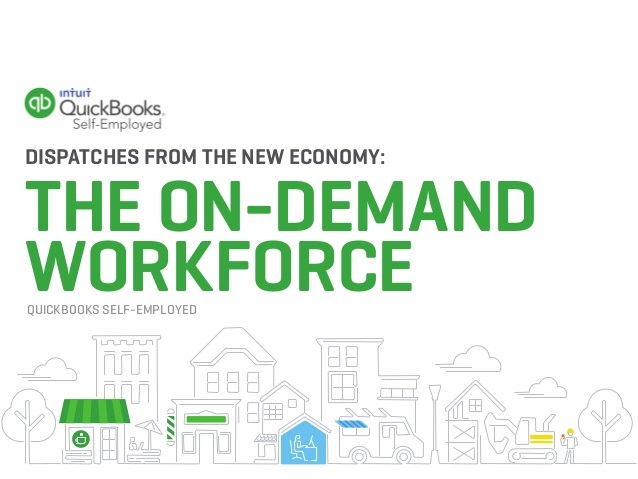 I recently attended an eye-opening event hosted by the California Association of Micro Enterprise Opportunity in San Francisco. The event shed light on the proliferation of self-employed workers in the U.S. and explored ways to support a new breed of workers, including those finding gigs through on-demand marketplaces like Upwork, Thumbtack, and Lyft.

A bulk of the day was spent reviewing research — some of it counter to popular ideas — about the on-demand work landscape. For example, while on-demand work is often seen and can be exploitative in some cases, a new survey found that the majority of on-demand workers are part-time (the average on-demand work week is 11 hours) and 67 percent of survey respondents reported that they are satisfied with their work. The survey was conducted by Intuit and Emergent Research and is yet to be released publicly. The flexible and easy-to-access income stream might be some reasons people are turning to the on-demand work economy.

In fact, many use on-demand work as a safety net to fill income gaps when there are no other speedy or flexible options. The data supports this while showing a variety of motivations — here are some figures from the report:

Importantly, the report couched the rise of on-demand work in the context of a broader shift to self-employment. It turns out that 36 percent (55 million) of the U.S. workforce is self-employed on a full or part-time basis. Only 7 percent (3.9 million) are on-demand workers, though that segment is set to grow quickly (19 percent annually through 2020).

Also interesting to note is the data showing the geographic and class dimensions of the flow of money between buyers and sellers of on-demand work. A recently Upwork study, The Independent Workforce in America: The Economics of an Increasingly Flexible Labor Market, showed that in the U.S., buyers had more income than sellers and that sellers were typically located in less affluent urban and suburban areas.

A blog post by Emergent Research's Steve King explains the significance of this data. In short, the long-standing "Paradox of Place" may soon resolve itself. As Steve King notes, the paradox is that people and companies still cluster in cities despite the ability telecommuting gives them to relocate and work from less expensive areas. Research from Upwork and Dowell Myers, demography and urban planning professor at the University of Southern California School of Policy, Planning, and Development, shows that cities across the U.S. have reached "Peak Millennial" and that the demand for urban living will likely plateau over the next few years. Insights from the global management consulting firm Bain & Company also backs up this thesis.

Millennials, as they enter a family-building life stage, could change their preference for urban living, and as the first generation raised in the digital era, may be more likely to embrace telecommuting for a shift to lower cost areas. Additional data from the event included The Institute for the Future's, Voices of Workable Futures, an ethnographic study of on-demand workers identifying seven archetypes, a first time ever Federal Reserve Board survey of enterprising and informal work, and the Aspen Institute's Portable Benefits Resource Guide. These added considerable depth to a rich and fascinating discussion about the future of work — a future that might be here much sooner than anticipated.