The Precariat's Guide to Biking Across Europe - Shareable
Skip to content 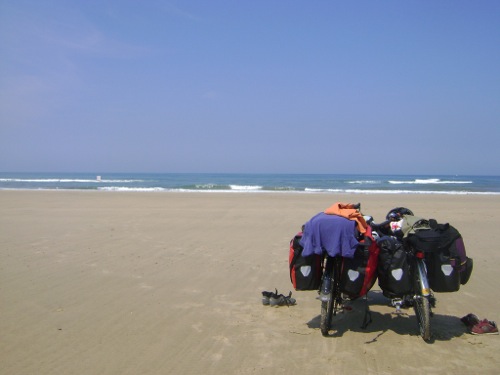 Adrift in a bleak economy and our isolated urban bubble, in 2010 my sweetheart and I set out to see the world the old-fashioned way: by bicycle. We did it on the cheap and without any itinerary, gadgets, or training. We moved south with the sun as the seasons changed, cooked food we found at local markets, and slept in fields or on strangers’ couches.

Over the course of five countries and 3,500 miles, we discovered an infinitely shareable world populated by people happy to share what little they had with two sweaty Americans on heavily-loaded bicycles. Here’s how we did it:

Bicycle touring rule #1: No one will understand why you are doing this 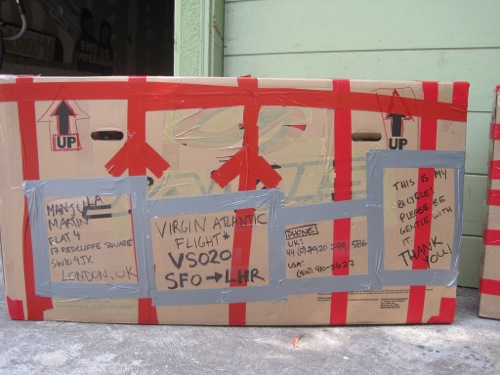 The customs agent at Heathrow airport stared us down, sucking in his breath sharply. My sweetheart, Max, obeyed the agent’s request to remove his hat, revealing a hot-pink fauxhawk.

I took a seat on the spare folding chair behind me. This was going to take a while.

“You’re unemployed?” the agent asked sternly, his eyes moving back and forth between Max’s hair and our papers. Max was so excited about our trip and his imminent job-free lifestyle that he’d written ‘unemployed’ on his entry form, not realizing the word might inspire mistrust in a border agent whose job description involved keeping potential undocumented workers out of the Kingdom.

“And you quit your place of employment?”

“And you are now arriving in the United Kingdom to travel for six months, without a return ticket home or any proof that you are going to leave the country again after I let you in?

But he wasn’t interested in our bikes. He turned on Max with a patronizing eyebrow.

“Young man, what makes you think it’s a good idea to quit your job in this economy?” 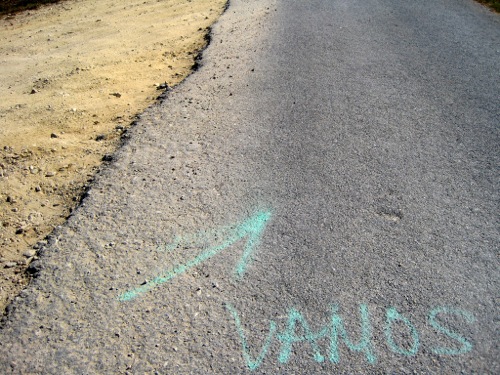 It was my idea.

I’ve never been very good at playing by the rules – go to college, take a linear career path, buy stuff, go into debt, stay in one place – but I’d been trying. I left a copywriting job to finish college at age 30. When I graduated in 2009, I found myself doing the same work for less money, except now I had a resume gap and insurmountable student debt. I bucked up and innovated, going into business for myself as a freelancer. But every time I finished a contract I found myself starting over, pulling on my bootstraps like they were lifelines and ending up with the broken threads of someone else’s economic norms.

My situation wasn’t unique or dire. Things were going all right, except for money. I liked my apartment, except for all the piles of objects I couldn’t seem to stop accumulating. Social life? Great, if it weren’t for the feeling of isolation rising in me thanks to day after day spent staring into various screens.

On Max’s days off, we rode our bicycles through Oakland and San Francisco. I loved the way that riding slow and low on two wheels forced me to experience the physical shape of the city differently. Streets I used to think were flat weren’t really flat. I memorized new details, and viewed neighborhoods in entirely new ways. 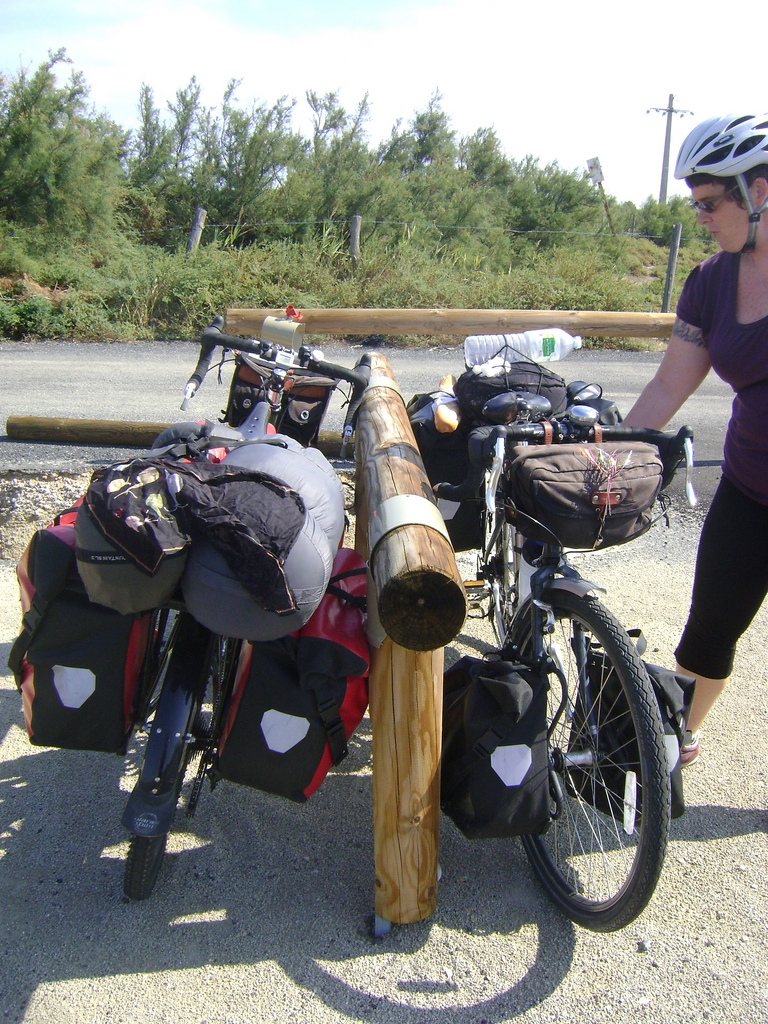 It occurred to me: Why not leave? If I wanted to move through the world in a different way, feeling every literal bend and bump of its infrastructure instead of sitting at a desk, traveling by bike was the way to do it.

It wasn’t totally out of the blue: we’d traveled before and had discussed taking a big trip someday. We had a bit of savings and could live more cheaply on bikes than at home. We realized there were alternatives: Our primary resource would be other people, not Google or a guidebook. Instead of running away from “the real world,” we decided to ride into it head-on with the wind in our faces. And the world took us in.

The elderly proprietress of a café in an impoverished region of Portugal refused payment and pressed extra sandwiches into our hands. A group of young Brits invited us off the street for a game of rounders and offered their living room floor. Farmers in Catalonia burdened our loads with handfuls of fresh peaches. We shared an afternoon with a bike pilgrim along the Camino del Santiago in Spain, and a week in Madrid courtesy of young indignados. Sicilians made us dinner. With every slow turn of each back road, we discovered a world of transactions based on nothing but humanity and trust.

Bike touring rule #3: Nothing’s going to protect you out there, and that’s okay 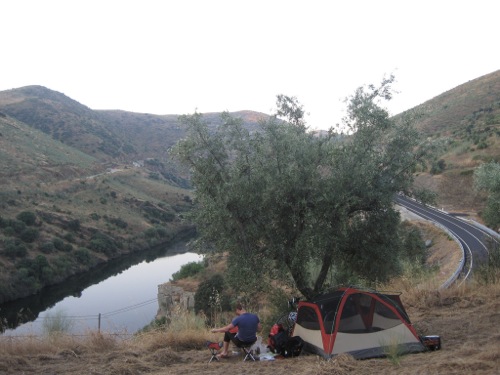 We spent our first night alone, though. I found a flat patch of grass beneath a sheltering tree and set up the tent while Max cooked us potatoes and lentils in one pot according to our new habit: eat the heaviest food first.

After dinner, we filled the pot with cold water from a water bottle and made garlicky hot chocolate. Max played the mandolin and I recorded our day’s travels in my journal.

When it was time for bed, it seemed impossibly dark. Urban cautiousness still ruled our actions. We left the rain fly open so we could see out, and locked the bikes to a tree. I tied a “tripwire” out of our clothesline that connected the bikes to the tent.

That first night, I didn’t feel liberated, I felt scared. I knew there was nothing but a thin layer of nylon protecting us from the world. I missed walls, and friends, and my fridge. Max folded his sweatshirt up in a ball and put it beneath my head as a pillow. We rested, surrounded by the things we carried and a world we had yet to explore.

Bicycle touring rule #4: You’re going to have to carry that 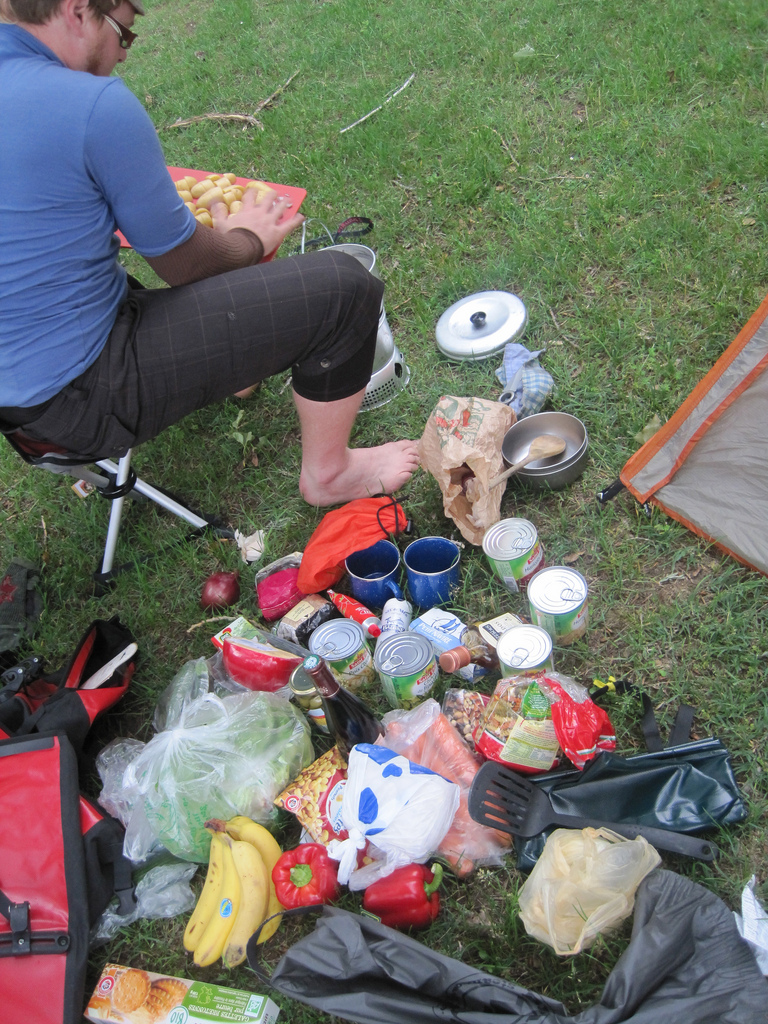 Bicycles will open up conversations, opportunities, and doors. They’ll also get caught in doors, attract attention, and fall on your leg. Bicycles will refuse to do anything for you, but will gladly do anything with you. Want to cross the Pyrenees? You’ll definitely need to work your ass off—but beneath that ass will be 10-20 pounds of metal designed specifically help you make it over that last pass.

On a bicycle, you don’t have the luxury of speeding past scenery to get to the good views. You’re inside the views, and working for them, at the mercy of the landscape and whoever lives there. Bikes put you at eye-level with the world. And they’ll never need gas, unless you count carbohydrates.

Bicycles can also carry a lot of stuff. A common question when people saw the five bags attached to each of our bikes: “What is in there?” 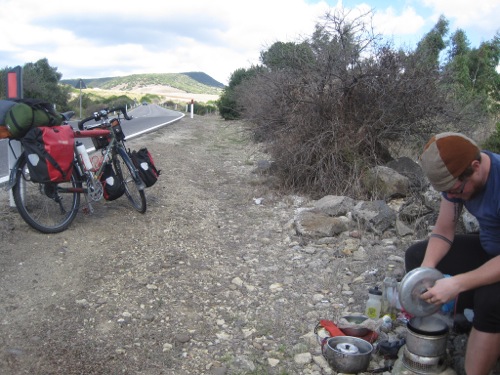 It was easier to say what wasn’t in there: all the personal objects I got rid of or stashed away with friends. A cell phone. Laptop. Extra shoes. Nice clothes. The weight of domesticity: stereos, piles of papers and magazines, a jar filled with pens on a desk. Artwork, pillows, electricity, and spatulas. Multiple types of soap.

When you have to rely on your physical strength to propel your possessions, you learn to consider the ratio between an object’s usefulness and its weight. A mandolin is far from essential traveling gear, but paid for its weight as entertainment and a conversation-starter. On the other hand, our guidebook got ditched in France after a few weeks; we encountered better experiences by asking real people for tips.

Some items are essential: Rain jackets, a tent, tire patch kits, a camp stove. You’re going to have to live in, and carry, whatever you bring. Whether food, clothing, or a seemingly ‘essential’ piece of gear, I approached each object with the question, “Can I push it up a mountain in the rain after riding 40 miles on a rough road?”

Bike touring rule #5: No one will get you out of here but you 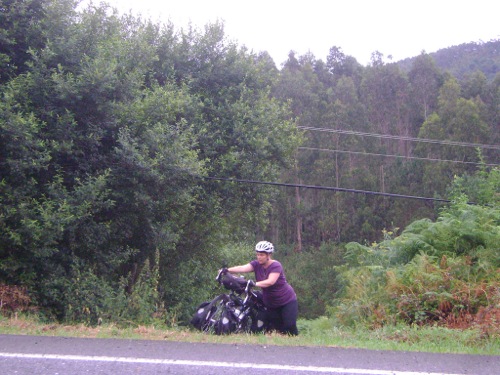 I wanted to quit a thousand times. The first time was the first day, on a nasty unpaved hill in East Sussex, England. It was impossible to see any further than 10 yards in any direction through a thick fog that would make the Golden Gate Bridge shiver in its moorings. What I could see was Max’s pair of small red lights directly in front of me, blinking in a manner that suggested they were as tired as I was.

As Max pedaled, I walked my bike, hurling my shoulders and calves into its 100 pounds of weight with every awkward step. A cold wind from the Atlantic Ocean negated my jacket. I could hear Max’s grunting pedal-strokes, the wet squeak of one of my bags, and distant bells. Somewhere on this ridiculous and dark mountain, sheep watched us.

In the eighth hour of riding, we were still 20 miles from our destination and countless rain clouds away from the London rail station we’d left early that morning. I was far away from the Mediterranean sun I sought. I was in the dark on an insane hill in the freezing English summer without a dry piece of clothing to my name. I stopped, breathed, aimed for the blinking lights, and pushed on: There was nowhere else to go. 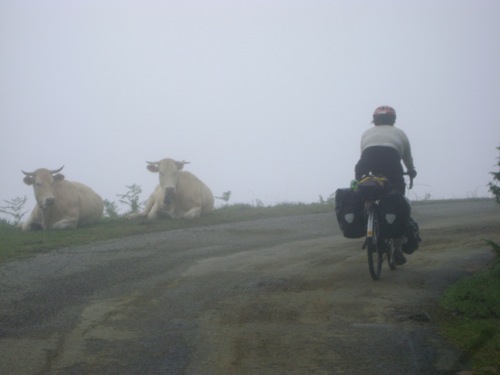 Going Slowly –Tara Alan and Tyler Kellen blogged every day of their two-year bicycle trip around the world. The result is a thorough and beautifully photographed chronicle—complete with trip planning, challenging moments, and that time they found the newborn puppies in Romania. While their commitment to going fully DIY may not be for everyone—they even made their own camping oven—their website is addictive.

Travelling Two – Friedel and Andrew are a Canadian couple who have cycled more than 60,000 km (37,000 miles) together. On their website, they cover a diverse range of practical topics, including advice for couples who travel together, essential gear, and a downloadable free e-book Bike Touring Basics. They have settled down in The Netherlands and just added a Traveling Third to their party, so expect more family-oriented cycling advice to come.

Sheldon Brown – I can fix a flat tire and clean a cassette, and Max can do much more, but neither of us are expert bike mechanics. When my bike’s headset wouldn’t tighten properly after our flight, Max was able to diagnose and fix the problem thanks to Sheldon Brown, the godfather of bicycle nerds. Even if you don’t know a part’s name, you can probably learn how to fix it (or build it) here. Since Brown’s death in 2008, the website is run by his family and Massachusetts shop Harris Cyclery, and also offers reasonably priced bike parts for sale.

The Precariat's Guide to Biking Across Europe

In 2010 Manjula Martin and her partner set out to see the world the old-fashioned way: by bicycle. Over the course of five countries and 3,500 miles, they discovered an infinitely shareable world populated by people happy to share what little they had.

• Part One: The Precariat's Guide to Biking Across Europe
• Part Two: Bike Nomad, Where Did You Sleep Last Night?
• Part Three: A Bicycle Nomad Prepares for Re-Entry

Manjula Martin‘s work appears in The Rumpus, Two Serious Ladies, Post Road, and Used Furniture Review. She has been an editorial assistant at Zoetrope: All-Story and a music blogger at

Manjula Martin‘s work appears in The Rumpus, Two Serious Ladies, Post Road, and Used Furniture Review. She has been an editorial assistant at Zoetrope: All-Story and a music blogger at The Record Daily. Make bird sounds to @manjulamartin.