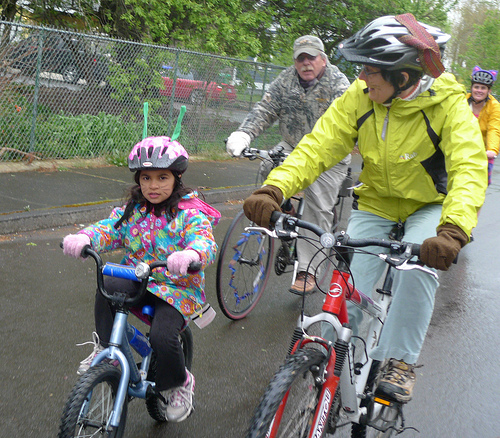 Portland is well known for its bike friendly policies that have pushed it into first place among large American cities for the percentage of people who bike. But what many people don't realize is that biking is good for the local economy, generating more $100 million of economic activity each year and creating 1000 jobs.

This is among the insights I learned spending several days exploring Portland as part of a Bikes Belong Foundation-sponsored transportation workshop for city officials from across the country.

Yet, as the delegation of transportation leaders from Chicago, Houston, Seattle, Minneapolis and Salt Lake City discovered while biking across the city, Portland is no Ecotopia. Local bikers still contend with roaring traffic on crowded streets and motorists who park illegally in bike lanes or honk for no apparent reason.

As Laura Spanjian, Sustainability Director in the Houston mayor’s office, observes, “I was surprised there’s so much traffic. Actually that made me hopeful—that we can do some of the same things in Houston even with all our traffic.”

“Portland is still an American city,” explains Roger Geller, the city’s Bicycle  Coordinator. “But since the 1990s, we’ve tried to make biking safer and more comfortable, and good things have happened. What you see are the results of a 20-year effort to promote biking.”

The accomplishments are impressive. Today Portland sports the highest share of bicycle commuters (6-8 percent) of any large U.S. city. It’s also the only large city to earn The League of American Bicyclists’ coveted platinum status as a bicycle-friendly city. (The others in that league are Boulder, Colorado, and Davis, California.)

“We don’t see the bicycle as simply an end in itself,” notes Catherine Ciarlo, Transportation Director for Portland Mayor Sam Adams, “but the means to a clean, green, vital city.”

She points proudly to Portland’s 314 miles of bikeways, which fall into four categories:

Bike lanes, separated from traffic by a painted line (202 miles).

Cycle tracks, a bike-only space along a busy street where cyclists are physically buffered from cars by a median, grade separation or wide strip of painted pavement (just under a mile completed, but more are underway).

Biking is healthy for the economy as well as people

The city is undertaking ambitious new plans to boost biking even more over the next twenty years. Calculated to cost $600 million between now and 2030—a pricetag that’s drawn some criticism in this era of tight municipal budgets—Ciarlo lauds the 2030 Bicycle Master Plan vision as “a good investment” that accounts for no more than five percent of the city’s overall transportation budget.

“The progress we’ve made in increasing biking came at a very low cost compared to other transportation funding,” she explains. Geller adds that between 2001 and 2007, bike facilities comprised less than one percent of Portland’s overall capital expenditures for transportation despite carrying between 3% and 7% of all trips.

Bikes actually pump a surprising amount of money into the local economy, according to Ciarlo. It’s a selling point for attracting tourists, and a recent study from CEOs for Cities shows that Portland keeps $800 million that would drain out-of-town if local residents drove cars at the same rate as an average U.S. city. The conclusion is that by spending less money on gas and less time on the highway, Portlanders have more of both to spend at local businesses.

Mia Birk, Portland’s Bicycle Coordinator from 1993-1999 and now CEO of Alta Planning+Design, points to a study showing that bikes now account for $100 million in local economic activity each year (including retail sales, national firms based here, and proceeds from bike events and rides), and are directly responsible for almost 1000 jobs in the region. She notes that a similar study in Wisconsin found a $1.5 billion boost for the state economy.

Promoting Biking Beyond the Young and the Fearless

Portland’s 2030 Bicycle Master Plan, unanimously adopted by the city council earlier this year, envisions Portland as “a world class bicycling city” by tripling the overall mileage of bikeways in the hopes of encouraging even more people to ride.

Meanwhile Metro, a government body elected by the entire metropolitan area, is enacting a plan to triple the number of people biking throughout the region over the next 30 years. Their target goal is that 40 percent of all trips of 3 miles or less in the city and suburbs would be done atop a bike by 2040.

“In some neighborhoods in Portland, 10-15 percent of people already bike each day,” notes Lake McTighe, manager of Metro’s Active Transportation Partnership, “which means that we could be making parts of Portland into a mini-Amsterdam or Copenhagen.”

For those who say that people living in outlying suburbs will never bike in large numbers, McTighe answers by quoting from a study by the National Association of Realtors showing that the second most desired amenity homebuyers want today is access to biking and walking trails. (Access to a freeway is first, proving that it’s not question of bikes vs. cars in most people’s minds.)

Both the city’s and Metro’s plans signal a strategic shift in bicycle planning—a new push to serve more than the 8-10 percent of people who feel at ease biking today. Portland is now  focusing on meeting the needs of the 60 percent of people who report in surveys that they’re interested in biking more but feel nervous doing it on streets with cars zooming past.

This means reaching beyond the young, macho, ultra-fit white men we typically think of as urban bikers to broaden the appeal for women, families, middle-aged and non-white riders. In the Netherlands, for instance, where 27 percent of all trips nationally are made on two wheels (and up to 50% or more of all trips are pedal-powered in some urban centers), more women ride than men. Even among people over 75, a quarter of all trips are on bike.

The best way to get more people on bikes, according to Portland officials, is to make biking seem less scary.

Actually the numbers of bicycle fatalities is decreasing in cities across the United States, Ciarlo says, and declining even faster in Portland—which shows that the more bicyclists there are on the roads, the safer biking becomes. Mia Birk notes, “As bike use has gone up here, the overall crash rate has gone down.” This is in large part because motorists grow accustomed to seeing bicyclists and keep an eye out for them at intersections.

But even in Portland, many people feel that biking on city streets is a risky proposition. That’s why the new Bicycle Master Plan will augment the city’s established network of bike lanes—where a white line divides riders from cars and trucks—with new facility types where people can ride on less-traveled streets optimized for bike speeds or roads with physical protection between bikes and motorized traffic: neighorhood greenways (bike boulevards) and cycle tracks.

“We’ve found that people will go out of their way to ride on a bike boulevard,” explains Geller. (City officials also welcome opportunities for new off-street bike paths, but that depends on the availability of rail corridors or linear parks.)

Portland’s plans also involve ways to increase the safety and comfort of bicyclists when they do come face-to-face with traffic at in intersection. Among these innovations, most of which have been proven to work elsewhere in the world, are:

A greater sense of safety and ease is not the only thing that gets folks out of their cars or off their couches and onto their bikes. Many people have not cycled since childhood and need some spirited encouragement to try it again. That’s why the city of Portland has launched an ambitious social marketing effort called Smart Trips.

The campaign zeroes in on a particular part of the city where car use is higher than average. It starts by mailing out a jazzy flyer to everyone in the area asking about their interest in biking, walking or taking transit. All who show interest get a visit from a friendly transportation ambassador, a personal mobility coach who can answer questions and address concerns about getting around in Portland. Someone curious about bicycling would receive maps and materials on the best routes in their area and an invitation from a transportation ambassador for an escorted ride to work. Geller notes that follow-up research in neighborhoods served by Smart Trips shows a nine-percent drop in single-occupancy-vehicle driving.

That’s the point behind Portland’s Sunday Parkways Celebrations, when certain streets are temporarily repurposed so bicyclists and walkers can experience the pleasure of moving about town free from the stress of negotiating with cars and trucks. It happens in different neighborhoods throughout the summer, and the Sunday I was in town a 4.5-mile figure-eight course running through downtown and adjacent Northwest Portland neighborhoods was cleared of motor vehicles.

It was an amazing experience to pedal up to an intersection and be waved through by a traffic cop as motorists patiently waited for two-wheeled and two-legged traffic to cross. Even intermittent rain showers did not deter thousands of cyclists from turning out—including a large number of parents pulling kids in trailers or tag-alongs. All along the route food vendors, entertainers and bicycle information booths gave riders a reason to dismount. I can’t think of anything better to excite youngsters about the rewards of biking and walking around town.

This was the third year for the event, which has grown from a single Sunday in 2008. The Sunday Parkways program is inspired by Ciclovía, a car-free Sunday ride pioneered in the Colombian cities of Bogotá, Cali and Medellín. In Bogotá, as many as 2 million people (30 percent of the city’s population) turn out to bike or stroll more than 120 kilometers of city streets. The celebration has spread throughout Latin America and the world, including Los Angeles, Miami, Vancouver, Cleveland, Detroit, Tucson, El Paso and Atlanta.

What place is the next Portland?

But what about the folks who want other examples of great biking cities in addition to Portland?

When I asked that question of Mia Birk, founder and CEO of Alta Planning+Design, a sustainable transportation firm with 14 offices around the country, she quickly drew up a list on the back of an envelope. Minneapolis, New York, Chicago, Seattle and D.C. are leaders among large U.S. cities, she explains. (Minneapolis, in fact, recently unseated Portland for the title of America’s Most Bike-Friendly city in Bicycling magazine—a decision that was disputed by many here.)

So who knows? Some day, not too far off in the future, city officials seeking great new ideas about biking may be traveling to Iowa or Houston, as well as Portland.

After all, “no one in the 1970s or ‘80s would have singled out Portland as a great town for biking,” admits city Bicycle Coordinator Roger Geller.