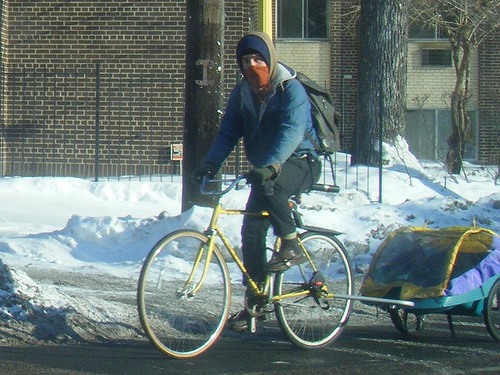 After being acclaimed as America’s best city for biking, what can you possibly do for an encore?

Well, in the case of Minneapolis, you do even more bicycling—and more walking too.

People here biked and walked 16 percent more in 2011 than in 2010, when Minneapolis was crowned “#1 Bike City” by Bicycling magazine. The same is true for St. Paul and some inner ring suburbs.

Biking rose 22 percent across the Twin Cities compared to 2010, according to data just released by Bike Walk Twin Cities. And it’s up a whopping 53 percent since 2007, when the organization began counting bicyclists and pedestrians at 42 locations in the two cities and adjoining suburbs.

Walking is also on the rise in the Twin Cities.  Pedestrian traffic rose 9 percent compared to 2010, and 18 percent since 2007.

Furthermore, Minneapolis gained more national recognition this year as one of America’s best walking cities.  It ranked number #9 (2nd in the Midwest after Chicago) on a list of America’s 50 largest cities, compiled by WalkScore—a prominent website that measures the walkability of neighborhoods around the country. That put it ahead of Portland (12) and Denver (16).  (St. Paul is not among the 50th largest cities, but if it was it would rank 15th, #3 in the Midwest.)

Bike Walk Twin Cities has conducted bike and pedestrian counts over the past five years as part of the federally funded Non-Motorized Transportation Pilot Program, which is focused on implementing proven strategies and finding innovations that allow some Americans to switch from driving to biking and walking for many short trips. Bike Walk Twin Cities is a program of Transit for Livable Communities, a nonprofit focused on increasing transportation options for Minnesotans.

The pronounced rise of two-wheel and two-feet travel between 2010 and 2011 is attributable in part to an array of street improvements—including more bike lanes and special bicycle-and-pedestrian boulevards—installed around town in the past year as part of the Nonmotorized Transportation Pilot Project.  The Twin Cities was one of four communities around the country designated as transportation laboratories in the legislation, which was passed by a Congress in 2005 and signed by President George W. Bush.

“The goal of this project from Congress was to shift some trips, and this data shows it is happening,” says Joan Pasiuk, director of Bike Walk Twin Cities.  “The implications for overall health and transportation access are outcomes the community will realize from the numbers we’re reporting.”

Bike and pedestrian counts on just one bridge across the Mississippi River, for example, show that the increase in biking translates to 96,000 fewer auto trips at that location during 2011 compared to 2007, explains Tony Hull, Bike Walk Twin Cities’ Nonmotorized Evaluation Analyst.  He arrived at that figure by using a model developed as part of the National Bicycle and Pedestrian Documentation Protocol by Alta Planning & Design of Portland. Overall, people made 1.1 million bike and pedestrian trips across the bridge in 2011.

“This is a massive number of people that need to be factored in our transportation policies,” Hull notes. “It’s not just nice that people are biking and walking more today.  It’s a significant form of transportation” which he says offers positive results for public health, the environment and our sense of community.

Accurate bike and pedestrian counts are critical to the growth of biking and walking in America, Pasiuk explains. “Policymakers act on hard evidence—they want to be able to know if their investment is paying off and that more people are relying on biking and walking as a regular transportation pattern. These counts show what’s happening on the streets in a way everyone can understand.”

I was on hand at one of the busiest spots, the Sabo Bridge on the Midtown Greenway where 767 riders and 60 pedestrians crossed in a two-hour period on a September afternoon. It was a chilly afternoon with howling winds that felt more like March than September yet waves of bicycles rode by, ranging from executives in business suits to Native American kids from the nearby Little Earth housing project.

Rolf Scholtz tallied each one as they passed. He’s the president of Dero Bike Rack Company, and one of 54 volunteers who took part in the project.  “We let our employees out to do the counts every year,” he said.  “Bike riding is going crazy around here.”

All the people counting bike and pedestrian traffic are trained by Bike Walk Twin Cities, and checked in on at least once by staff during their two-hour shift.  Some cities use paid counters from temp agencies, Hull notes, but BWTC believes volunteers are more diligent and accurate.

The counts have been carried out the second Tuesday, Wednesday or Thursday of September for the past five years to ensure an accurate measure. “This data is rock solid,” Pasiuk says.  “BWTC is using state of the art methodology for tracking and interpreting data.”

Bike Walk Twin Cities also conduct counts on the second Tuesday of every month at 6 locations around town, which have turned surprising results—20 percent of bicyclists and 75 percent of pedestrians continue to bike and walk throughout the winter despite Minnesota’s frigid, snowy weather.