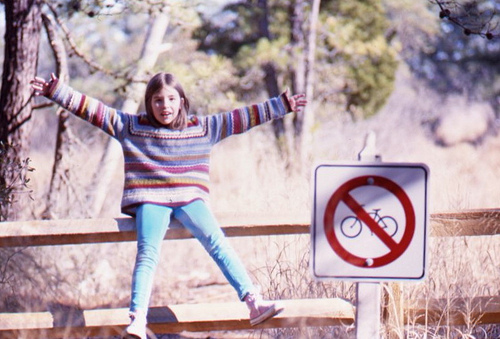 The town of Hull, Wisc., recently proposed an interesting solution to growing concern about safety on its roadways: Forbid bicyclists and pedestrians from using them.

A town public safety committee, which examined general safety on town roads this summer, came up with a draft ordinance in September that requires biking, running or walking groups to register their travel plans with the town or bans them from using roads outright (Steven's Point Journal).

Although the small town has only had five pedestrian-car crashes and one bike-car crash in the past 10 years, town Chairman John Holdridge said the town gets a lot of complaints about groups of people running down the middle of the road at night or taking up most of the road during the day, or bikers riding on the wrong side of the road.

It's unfortunate that the Town would rather deny bikers and walkers the pleasure of non-motorized transportation rather than simply increase bike safety knowledge or designate safe biking routes.

According to the Wisconsin Department of Natural Resources, nearly half the residents of Wisconsin ride bicycles and most of them are just regular folks out to enjoy a leisurely bike ride to run an errand, to work or for recreation.

Recent research has weakened the argument that biking and walking puts people at risk for injury or death, and in fact a recent study found that biking insteading of driving could actually extend human life expectancy.

Even if this ban passes, it's likely that the Town of Hull will have a hard time enforcing it. Without a police force of its own, the Town would have to pay the county sheriff's department to enforce the law if it were enacted.

Representatives of the Wisconsin Bicycle Federation say that the proposed ordinance seems to go against data that show few accidents on town roads, and has advised the town to focus instead on educating all users of the road on safety.