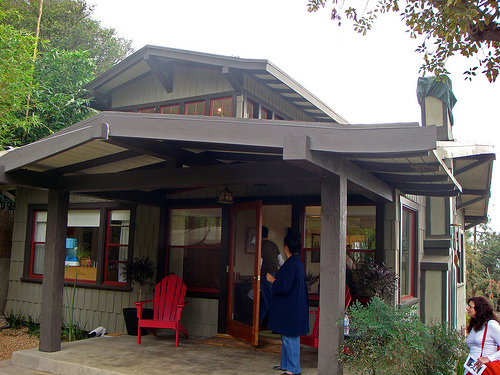 Advocates of sharing and other unimpeachably sensible ideas often get flack for being out-of-step with the American spirit—for trying to force some kind of (take your pick) Euro/ socialist/ zen Buddhist/ nostalgic/ Third World/ green lifestyle on people perfectly happy with the way things are.

This seems especially true when discussing urban planning. Express any aspiration that our towns could become more neighborly, lively or walkable, and you’ll be accused of compromising the American dream.

So I am happy to report that one influential planning trend, which offers millions of people of all incomes the chance to enjoy a greater sense of community, originated right here in the USA.  I am talking about Bungalows, those ubiquitous small homes that line streets of older cities and suburbs coast-to-coast.

While the word came from India to describe traditional low-rise homes with big verandahs, the ingenuity of the bungalow is all American.  Built in huge numbers between 1910 and 1930, they fulfilled families’ dreams of having their own yard yet preserved the high-density development patterns that foster neighborhood businesses and public transit.

The houses are generally modest but feature fine touches like fireplaces, hardwood floors, oak woodwork, built-in buffets and bookcases. Luxurious versions, however, can be found in California, the Pacific Northwest, the Upper Midwest, Chicago, Washington, D.C, and other spots where the style was most popular.

Once dismissed as obsolete (as late as the 1980s, the houses were deemed too small and too close together to suit modern tastes), these tidy neighborhoods have grown increasingly popular over the last 20 years as more homebuyers prize energy efficiency, transit connections, sidewalks, local shops, natural materials and architectural authenticity.  Magazines like American Bungalow and Style 1900 feed people’s curiosity about these classic homes, and groups like the Twin Cities Bungalow Club bring owners together to discuss repair projects and decorating tips.

But the greatest appeal of these little houses is the community spirit they foster. Bungalow neighborhoods are places where you chat with neighbors sitting on their front porch, where you run into friends at the corner cafe, where folks come together to plant a garden, where kids run back and forth between each others’ houses.

It’s a place where people share their lives.  Who could possibly say that’s un-American?