The ELF Solar Hybrid: e-Bike Commuting for the Faint-of-Heart - Shareable
Skip to content 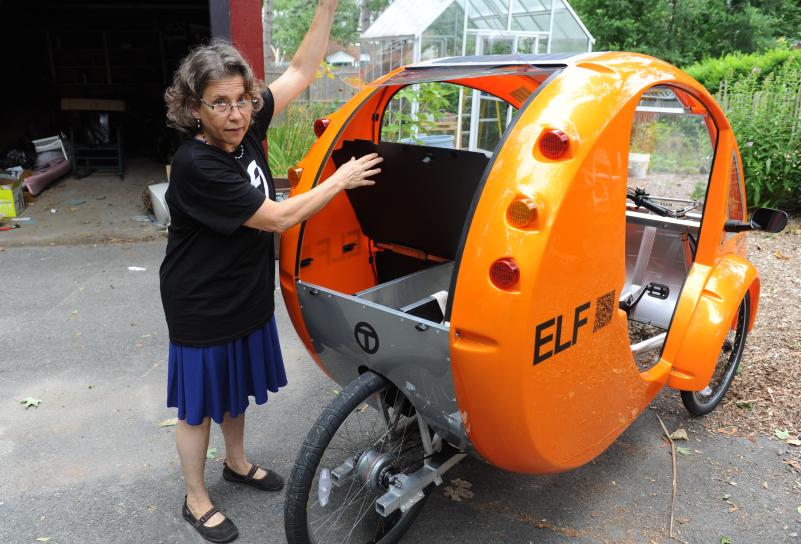 Yes, that’s right, I live in Michigan, home of the automobile.

That’s why the idea of the ELF, a hybrid solar/battery-assisted peddle-powered vehicle that gets up to 1,800 miles per gallon, is so intriguing.

Designed by Organic Transit, the ELF is a brightly colored pod-shaped tricycle much like a velomobile that can go anywhere a bike can go, while being far more visible in traffic and affording some protection from the elements. The vehicle also offers the ability to transport up to 300 pounds of cargo, addressing another of my bike lifestyle anxieties: grocery shopping for my family.

The vehicle features power-assisted peddling which the cyclist can fully or partially engage as desired, allowing the user to coast or get some exercise while driving. The battery range is about 14 miles; additional battery packs are available and can extend the range. Charge time is 30 minutes by plug-in or 7 hours by sunlight. Solar panels are included with the vehicle.

The company launched in 2013 after a successful Kickstarter campaign that more than doubled the initial ask of $100,000. So far, the Durham, North Carolina-based startup has churned out an average of one vehicle per week last year, reaching around 50 units in 2013, but plans to open a western U.S. factory soon to boost production.

So far, units have tended to sell to the environmentalists averaging around 50 years of age, according to an ABC News Report. The report also noted that a Brooklyn juice company ordered 40 units for deliveries to avoid vehicle-parking fees, as the ELF qualifies as a bikes.

Critics have expressed concern that, at 150 pounds, the vehicle is too heavy to lift say, up a flight of stairs, likely too bulky to take anywhere by car and possibly too wide to safely navigate standard bike lanes. The vehicle is truly a hybrid, combining some of the best elements of a car and bike while clearly trading off some of the conveniences of either.

Organic Transit is also at work on a utility version called Truckit, expected to be available in spring 2014 and will carry 500-800 pounds.