"Now that we can do anything, what will we do?" - Shareable
Skip to content

Last Saturday, I took part in Creative Sydney at the Museum of Contemporary Art. Towards the end of the speech I was telling the audience about how I went to see an exhibition in 2006 called Massive Change. (Tagline: "It’s not about the world of design. It’s about design of the world.") As I entered that show, I was confronted with gigantic black and white type with the big question:

“Now that we can do anything, what will we do?” 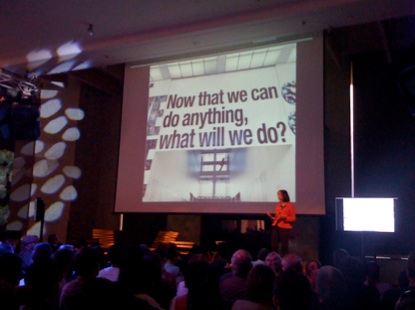 The question really hit me at the time and I sensed it struck a chord with the Creative Sydney audience. It is the challenge entrepreneurs, designers, advertisers, and so on face every single day: What’s our role in the choices consumers make? How can we “culturalize” people to share and behave more collaboratively? How can the latest technologies reinvent industries and challenge old consumer myths we have been told? How can we use our skills help change our world for the better?

I invited the audience, mainly composed of people from creative industries, to think about how critical they are in taking the world of Collaborative Consumption out of the world of “what if” and into real workable solutions that help find a healthy balance between the needs of consumers, companies and the greater good of society. Of course, entrepreneurs are already integrating the worlds of technology, design, brand, and marketing to create a cool and powerful collaborative idea with a wealth of health, environmental and community benefits all bundled into one solution.

One example: In April 2010, a state-of-the-art bike sharing program called B-Cycle launched in Denver, Colorado. It’s the first large urban bike sharing network in the U.S. The bright red and white Trek bikes that Denver residents have dubbed the “Red Cadillacs” are distributed at 42 B-Stations across the city. Each bike is outfitted with a GPS “smart computers” that track your route, mileage, calories burned and amount of carbon offset — a great example of personalizing the bike sharing experience. This information is collected and available on your personal B-Cycle Web page. (I think this has the potential to become the bike sharing equivalent of Nike & Apple’s Nike +.) Another great design element is that the bike stations are run entirely on solar power.

But my favorite features are around community engagement. On the B-Cycle website, you can enter your zip code and see how many bikes your neighborhood would need and the B-Effect of how your area would benefit including: gallons of gas saved, carbon emissions reduced and calories burned. I was amazed to find out that just one month after launch, 3,000 Denver residents have burned over 1.3 million calories!

There is also a "Who Wants It More" map that encourages you to input your own zip code as a way of casting your vote to rally to bring B-Cycle to your city. I can see that in Brooklyn, where I used to live, 2,177 fellow residents have voted, making it #3 on the list of cities who want it more.

B-Cycle was developed as joint venture between the advertising and design agency Crispin Porter Bogusky, the health insurance company Humana and bike company Trek–a wonderful example of three different industries effectively collaborating together. As someone from a design and brand background I can immediately see the thinking of a smart agency at play. They have clearly made fast user adoption the number one priority. And they have done so by focusing on the urban cool factor, i.e. not just making it a normal thing to do but the thing to do. None of the brand messaging contains any “anti” or “blame” sentiments (e.g. “Don’t drive, bike”), instead focusing on positive benefits that appeal both to the users’ “me” needs (“I can get healthier”) and our “we” mindset (“We can make our city cleaner.”)

Even where B-Cycle is being promoted is cool and smart. For example, this month, New Belgium Brewery has partnered with B-cycle to encourage more people to bike more with custom labels on 16,000 cases of its aptly named Fat Tire Beer. 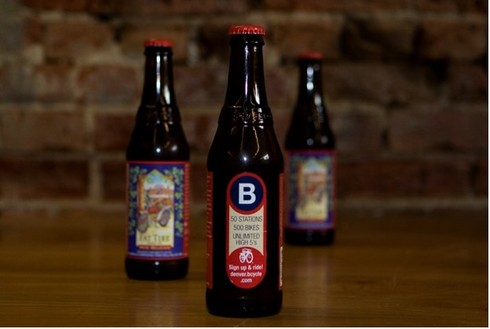 What I love about B-Cycle is the design is about far more than the bike, renting or even creating a better solution to get around; it’s about creating an engaged community. The designers, marketers, product engineers and city council have asked themselves, “Now that we can do anything around biking, what will we do?” — and they've come up with a solution I want right now. In short, technology and service design thinking are brilliantly applied to…