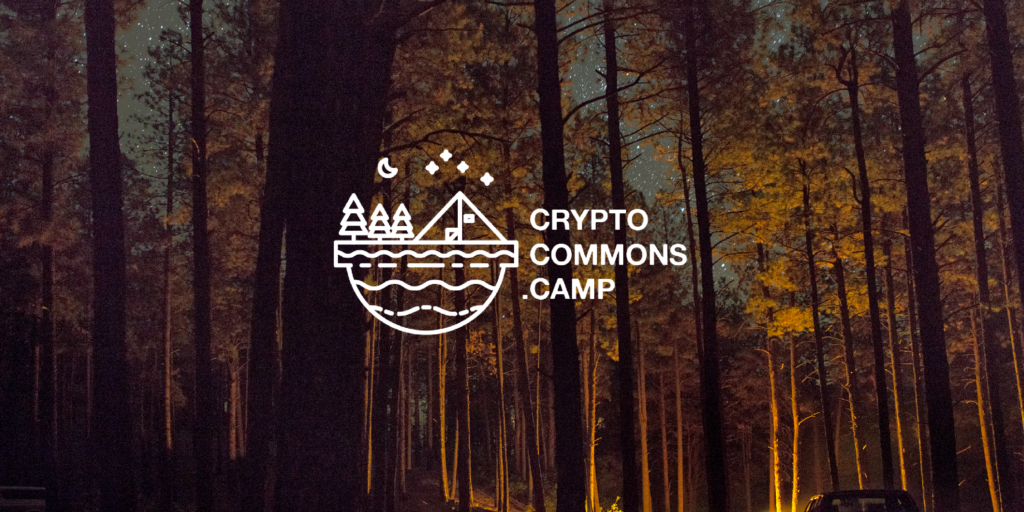 As members of a global movement, each CryptoCommoner is picking up their piece of the world to conduct a bold experiment to reverse the process of capitalist enclosure. They are using technologies to develop new models of collective governance of assets to help humanity steward and restore our common social and ecological systems.

I met Ishan Shapiro in Costa Rica a few weeks ago but I had heard of his project, Cryptocommons.camp, a month earlier. Tall and thin with a slightly unruly beard, he’s a beautiful person and a perfect embodiment of the CryptoCommons Movement. Shapiro is founder of the Future Scouts, a 21st century scouting organization for learners of all ages, and he’s currently organizing the purchase and development of a flagship property, a large nature-based campus on the West Coast.

Shapiro envisions a future in which CryptoCommons.camp has campuses across the United States and abroad, each a hub for experiments in regenerative culture, “We’d like to help catalyze a global movement of grassroots land stewardship that respects the land, its indigenous peoples, and the welfare of current and future generations.” He explained that “to do this, we can’t subscribe to the same models of ownership and extractive profit that we have been, but develop novel economic vehicles for regenerative culture. That’s what our first $CAMPus will be an experiment in – a gathering place for groups to prototype practical models for decentralized governance, regenerative culture, and collective potential.”

When you ask a CryptoCommoner to explain why the world is moving sideways, it always comes back to the problem of extractive profit – the theft from the commons. A favorite expression of mine is that Capital is simply dead nature and alienated labor. The CryptoCommons movement exists to solve this meta-problem of the economic relationship between people and our planet, and for people to demonstrate new norms of grassroots governance and stewardship of the next economy.

What makes a CryptoCommons is the use of distributed technologies to cryptographically secure a commons under an alternative framework to ‘ownership’. Land is an important part of the commons as is energy, production, water, air, health, etc. Understanding and honoring the Rights of Nature is at the heart of the CryptoCommons. According to the Global Alliance for the Rights of Nature, “The Rights of Nature is the recognition that our ecosystems – including trees, oceans, animals, mountains – have rights just as human beings have rights…Rather than treating nature as property under the law, Rights of Nature acknowledges that nature in all its life forms has the right to exist, persist, maintain and regenerate its vital cycles. It is the holistic recognition that all life, all ecosystems on our planet are deeply intertwined.”

This first land purchase will serve as the cornerstone within a wider network of nature-based and micro-campuses for self-directed learning, regenerative community, and economic empowerment.

The CryptoCommons.camp network will be governed as a Decentralized Autonomous Organization (DAO), that will purchase, develop and steward the campuses. Stewardship councils will be comprised of citizen stewards, staff, organizational partners, volunteers, individuals, and special guest facilitators, and may also include community stakeholders who have access to the campus on an ad hoc basis.

Within the CAMP DAO, they’re creating multi-currency and mutual credit systems, starting with a dual token system of $CAMP and $CAMP NFTs. The Camp token ($CAMP) is their initial fundraising mechanism and unit of common exchange within the CryptoCommons.camp network of campuses. $CAMP is an ERC-20 token on the Ethereum blockchain created via smart contract the Juicebox.money DAO platform.

Members of the CryptoCommons.camp network will be able to purchase campus-specific Non-Fungible Tokens (NFTs) that serve as an expression of membership in a local campus and roles within the network. NFT holders will be able to participate in decision-making and governance. For example, they’ll have a say in the development of facilities that add to the value of the land and the people who use it, the funding of regenerative projects on the campuses, and the learning activities and events that occur there.

CryptoCommons.camp was the first project I encountered using the ancient concept of ‘usufruct’

The $CAMP DAO holds land assets collectively in stewardship through a Nondominium, which is an innovative emerging legal framework for the commons. It allows participants to pool resources by transferring ownership of assets to a Custodian (in this case, the DAO), in return for rights of use, usufruct, revenue, and decision making over the resources in proportion to their relative contribution to the resource pool and its subsequent development.

CryptoCommons.camp was the first project I encountered using the ancient concept of ‘usufruct,’ referring to the right of using and enjoying the profits of an estate or other thing belonging to another, without impairing its substance. Usufruct appears as far back as Hammurabi’s code, and more recently, Thomas Jefferson was a proponent of usufruct, and said famously in a letter to John Madison, stating, “The Earth Belongs in Usufruct to the Living”.

Shapiro expresses a core tenet of the CryptoCommons movement when he tells me the dominant crypto capitalist economy and culture is unjust, extractive, and overly speculative, “If you don’t have crypto, you can still participate in the $CAMP DAO! Although we’re raising capital via cryptocurrency, that’s not the only way to join Crypto Commons $CAMP and become a $CAMPER”. He went on to explain that they’re “designing ways for all individuals to participate directly, economically, and recreationally, in the benefits of ecological stewardship. We want to open up opportunities for all, especially those from marginalized communities, to be co-founders of a global movement to steward the land and maintain access to nature for generations to come.”

There is currently an open token sale on Juicebox, where $CAMPers can contribute Ethereum to reserve stays in advance and become founding Citizen Stewards of $CAMP. To reward early financial contributors, they’re offering a 12.5% discount on the $CAMP token each subsequent monthly funding cycle until they hit their first funding target of $525k – enough to put earnest money down on their $CAMPus and roll out their tokenization and governance of the DAO.

“We’ve created a dual token system of $CAMP and $CAMP NFTs. In our Phase I funding cycle, $CAMP functions as an initial reservation of a level of a “membership” tier in the $CAMP DAO. It’ll enable us to put down earnest money on our first $CAMPus. By participating in our first round of financing, you are reserving your level of membership via NFTs, and can secure your stays, summer camps, retreats, workshops & events at our flagship $CAMPus for 2023 and onwards at a discount.”

They prefer to call KYC (know your community) and Shapiro takes commitment to community seriously, “Since ours will be a hybrid digital and physical community inclusive to all ages, ethnicities, and genders, we are committed to maintaining $CAMPus safety.”

They are raising funds from a diverse community ranging from other non-profits to people choosing different lifestyles that represent a radical departure from conventional consumer society; from educators and mother nature enthusiasts; to farmers and makers to lifelong learners of all ages.

Shapiro anticipates issues with making a speculative financial token the DNA of the Crypto Commons $CAMP DAO, “We will not be executing decision-making of the DAO based on any single token governance mechanism. We encourage all participants in our Phase I token raise to see the Crypto Commons $CAMP DAO as an evolving experiment in collaborative governance – not a financial investment.”

Finally, if you’re wondering whether you will be able to earn merit badges just like when you were in the Boys and Girls Scouts, the answer is YES! “The opportunity to earn $CAMP badges will be offered to all $CAMP holders as a way to acknowledge their contributions to our shared mission.”

It’s clear Shapiro has earned his CryptoCommoner badge with this project.

This is a community-contributed article. Please send us a pitch here if you would like to publish a story about your project on Sharable.net.

Dr. Sarah Grace Manski is an Assistant Professor of Business and Global Affairs at George Mason University. She studies uses of technology for democratization as well as technology as a

Dr. Sarah Grace Manski is an Assistant Professor of Business and Global Affairs at George Mason University. She studies uses of technology for democratization as well as technology as a site of social struggle. Her research examines the use of blockchain and holochain technology by cooperatives, supply chain activists, and others to construct a global technological commonwealth, as well as countervailing efforts by established financial and political institutions to channel emergent technology. In 2017, Manski founded the International Society of Blockchain Scholars. She is a University of California Regents Fellow, a fellow with the Liberty Tree Foundation, and a member of the editorial board of the academic journal Strategic Change: Briefings in Entrepreneurial Finance. Manski has served in formal capacities as advisor to the Wisconsin Sustainable Business Network, a member of the City of Madison's Solid Waste Advisory Committee, and as professional staff for the labor unions AFSCME and IFPTE, as well as producer of nationally syndicated labor and environmental radio programs. She received a Masters of Science from the University of Wisconsin at Madison and has published in the academic journals Strategic Change, British Journal of Sociology, and Law & Critique.