Collaborative Funding Skyrocketed In 2011. Will 2012 Top It? - Shareable
Skip to content 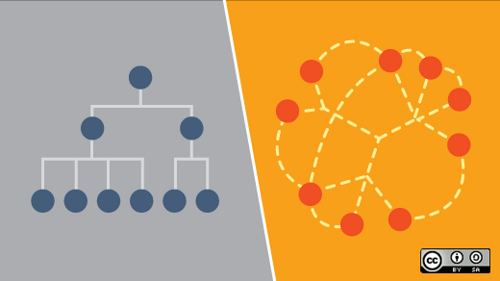 Mainstream media is taking a lot more notice of the sharing economy lately (see recent ABC interview with Shareable's publisher Neal Gorenflo), and true to form they want the hard facts on how big sharing really is.

In a society obsessed with money and posessions, it's no surprise that a common question from reporters is "how much is the industry worth?"

Most collaborative consumption enthusiasts are well aware that money is only one way to value the trend, but still, these are valid questions from those looking to report on or invest in the growing movement.

So we decided to investigate. What follows is an overview of the venture investments in collaborative consumption during 2011. It's not exhaustive, but it shows that investments in the space skyrocketed in 2011.

What's will happen in 2012? Investment has continued including Zipcar's investment in college-focused P2P car sharing company Wheelz. However, it may be an uphill climb to match 2011 levels as Airbnb's massive $112 million round makes up nearly half of 2011 collaborative venture investments. It begs the question – is a funding that size possible this year?

When the recession hit in late 2007, many experts predicted that citizens would change their consumption habits. And they were right. One response to financial pressure was to resurrect centuries old practices of swapping, bartering, renting, and sharing. Internet startups already set up to help facilitate such transactions rode the trend.  And many entrepreneurs established new online platforms to make sharing safe and easy. 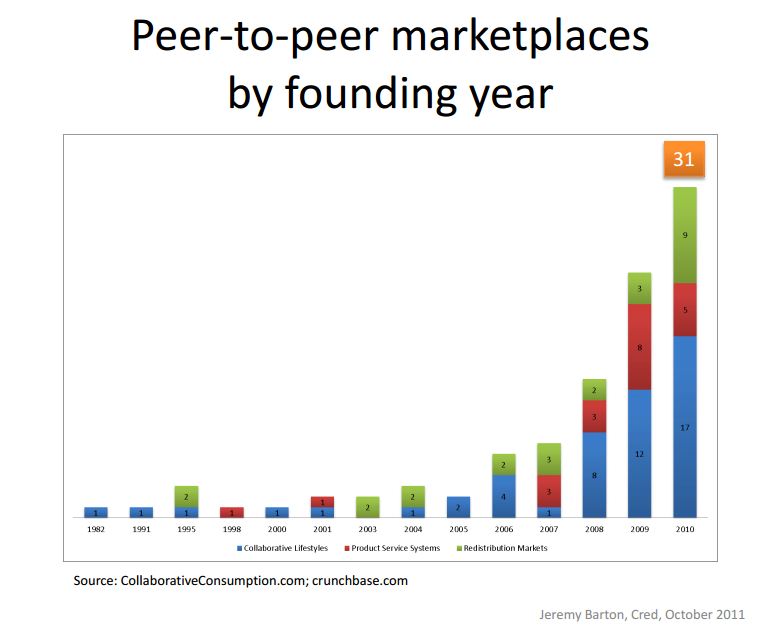 The success of the pioneers like Airbnb piqued investors' interest and sparked a slow but steady trend of funding for P2P and collaborative consumption services. Then in 2011, investment in the space skyrocketed seeing noteworthy investments across many types of collaborative services. Below is an overview of some of the more notable investments, though not exhaustive. 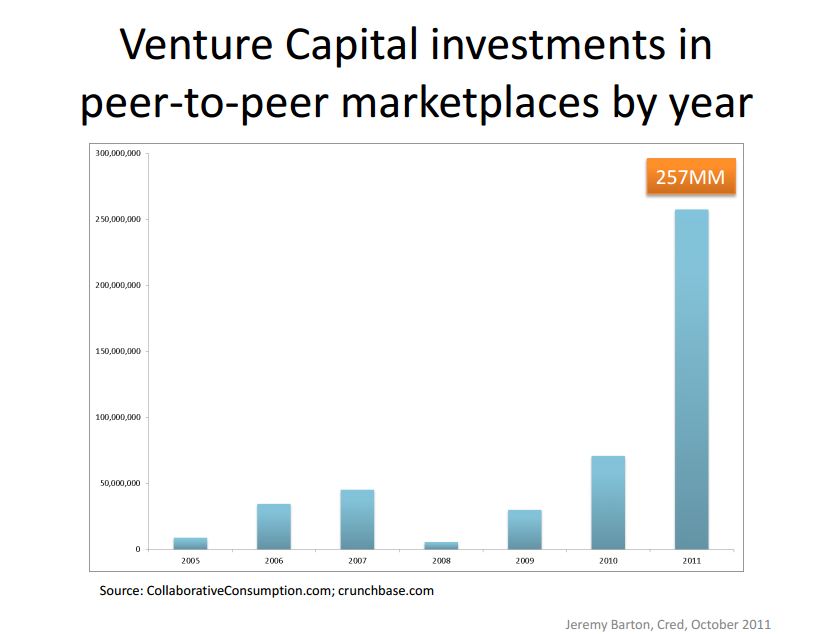 In early March 2011, OneFineStay announced $3.7 million in Series A funding from venture capital firm Index Ventures. In June, Berlin-based Wimdu raised $90 million from European investors. And in July, apartment-sharing startup Airbnb received $112 million in Series B financing, bringing the company’s total funding to $119.8 million. And in a surprising move, nonprofit Couchsurfing turned into a for-profit B-corporation and raised $7.6 million.

In May 2011, ThredUP, the popular kids’ clothing exchange site, raised $7 million in Series B funding from Redpoint Ventures, Trinity Ventures and Brian Swette; and TurningArt, a startup that aims bring a Netflix-like model to the art world, secured $750,000 in seed funding led by NextView Ventures. In August, Rental eCommerce company, Rentcycle landed its first $1.4 million round of funding. And further demonstrating that sharing concepts have mass appeal, Toygaroo, a fledgling online toy rental service, received $200,000 in seed funding from the moguls on ABC's Shark Tank in March 2011.

P2P lending continued to flex its muscles as an industry with Lending Club announcing $25 million in Series D round of financing from Union Square Ventures and existing investors, in August 2011. The Lending Club announcement came fast on the heels of Prosper's announcement of a $17 million round by Eric Schmidt and DFJ, bringing its total investments to $75 million. And on the learning front, Skillshare announced $3.1 million in a Series A round of venture financing in August 2011

Industry-leader Zipcar raised $174 million in April 2011 through it's initial public offering (IPO), surpassing its original target of $75 million. While not a venture funding, Zipcar's IPO along with that of HomeAway's in June 2011 likely helped heat up the space.

Despite Zipcar's market dominance, there is still plenty of room for other car and ride sharing ventures to carve out their own niches. In September 2011, Getaround announced a $3.4 million seed round, with participation from Netflix founder Marc Randolph and WordPress’ Matt Mullenweg. Also in September, Zimride, a ridesharing service, raised a $6 million Series A funding round led by Mayfield Fund, bringing its total funding to around $7.2 million. By October 2011, RelayRides, a P2P car-sharing service that lets you rent (or rent out) cars by the hour raised $13 million in Series A funding.

Although the bulk of the investment dollars are shared by relatively small number of companies and likely represent only a small percentage of overall venture investment, startups in this space are reinventing an industry worth billions (depending on how you define it) and growing:

As Entrepreneur.com reported in late 2011, the product-rental market (Rentcycle, AnyHire) is now valued at $85 billion; the vacation-rental space (Airbnb, CouchSurfing) at $80 billion; the ride-sharing industry (Zimride, liftshare) at $117 billion. In addition, the North American car-sharing market (Zipcar, Getaround) is projected to grow to 1.4 million members in 2012, up from 600,000 in 2011; and research firm Gartner has estimated that in 2013, there will be $5 billion in outstanding peer-to-peer loans (Zopa, Prosper), not to mention the billions invested on crowdfunding sites like Kickstarter and IndieGoGo.

Encouraged by the initial success of companies like Airbnb, LendingClub, Zipcar, and TaskRabbit, collaborative consumption businesses and applications have begun to spring up all over the world. Slowly but surely, venture capitalists as well as traditional investors have rallied behind these fast-moving endeavors helping make assets of all kinds more accessible to citizens.

Can Collaborative Consumption's Impact Be Measured In Dollars?

The short answer is no. While the amount of investment is a great way to measure the market's confidence in collaborative consumption, it by no means quantifies the positive impact this industry has on local economies, the enviroment and individual lives.

Nevertheless, dollar amounts are what alerts the market that a shift has occured, which in turn prompts governments and other powerful economic entities to investigate, and hopefully support, the change. When these entities realize that it's in their best interest to participate in the paradigm shift, rather than resist it, the shift can accelerate.

Where Will Collaborative Consumption Go From Here?

In late 2011, Ron Conway, legendary angel investor, called collaborative consumption a "mega-trend," comparing it in size and scope to social networking (Facebook) and real-time data (Twitter). Entrepreneur magazine followed suit by naming collaborative commerce the "second hottest sector" for start-ups in 2012. Since then Shasta, Menlo, Redpoint and other prominent VCs have started investing in these themes as well.

Investors seem confident that the sharing economy is here to stay, and in a time when many are unsure about putting their money at risk, funding collaborative ventures seems to be considered a good bet.

To get a better handle on which genres of collaborative consumption are poised for greatness in 2012 and beyond, Shareable caught up with Craig Shapiro, Founder & CEO of the Collaborative Fund.

According to Shapiro, the rapid expansion of businesses like Airbnb, Kickstarter, and TaskRabbit is a big indicator that "people feel compelled to work together," and they will gravitate toward services that let them do that more efficiently.

"Ownership won't go away, but attitudes toward ownership are shifting," said Shapiro. People have become more concerned with experiencing things, rather than being able to put them on a shelf. This will give way to what Shapiro calls a trend toward collaborative thinking in 2012.

"Big data will be extremely important in 2012, and I'm eager to see the growth in startups finding connections between online and offline lives," said Shapiro. "While enterprises strive to draw insight from ever-increasing mountains of information, I see the average consumer striving to make sense of the noise from their composite online presence.

"But it works both ways," he continued. "Online communities can help augment our offline lives. One example is BankSimple (now: Simple). Our banking and finances (traditionally relegated to brick and mortar venues) can translate to an exquisite user experience online, helping us to understand our daily purchasing habits and avoid fees associated with user experience traps inherent to the way big banks profit."

When it comes to determining what attracts investors to sharing businesses, Shapiro says that its more than just a big user base and a familiar model. Those who recognize that the market is moving in a new direction are looking for companies that display the core values of collaboration: creativity, transparency, responsibility, and accountability to their community and stakeholders.

"These values are changing the ways employers work with employees, businesses work with customers, and individuals work with one another," Shapiro said. Because the essence of the sharing economy is about strengthening these people-to-people connections, it's important that companies can demonstrate how their brand will create and sustain those connections.

Rather than focusing on market size or market potential, or even the idea itself, the Collaborative Fund looks first and foremost at the company's team.

"We consider each startup opportunity by asking ourselves two questions: 1) Can we add value to the startup from our team plus our group of extraordinary investors (i.e. Nicholas Negroponte – founder of MIT Media Lab, Brendan Synnot – founder of Bear Naked, Chuck Templeton – founder of OpenTable), and 2) If this company is wildly successful, will the world be better off for it?"

For sharing advocates, this focus on both the tangible and intangible value of collaborative consumption companies is a comforting safeguard. Purpose-driven investors like the Collaborative Fund can help keep the industry from slipping into the same profit-hungry rut from which the economy is struggling to recover.

Funding graphs via Jeremy Barton, Founder and CEO of Legit.