The Castells of Catalonia: Inside the Incredible Art of Human Towers - Shareable
Skip to content 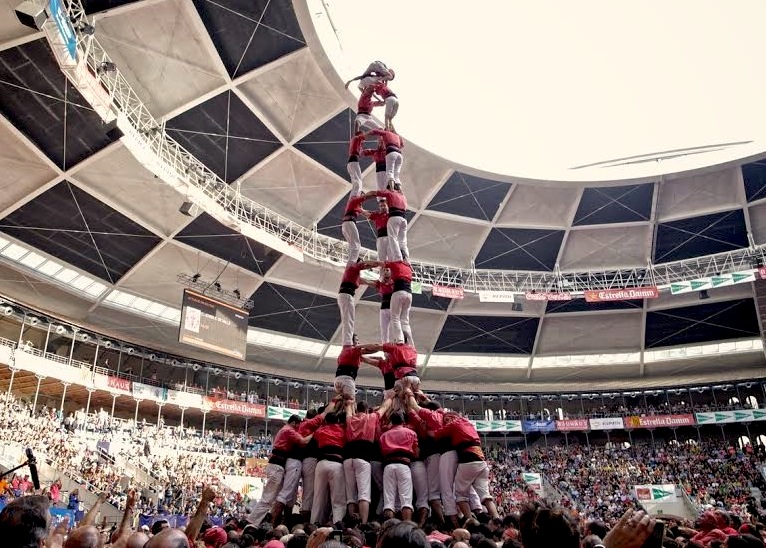 What does it feel like to be atop a nine level tower made entirely of humans? I have no idea. But, in Catalonia, Spain, there’s a long tradition of building human towers that represents not just a daring feat, but a rich cultural tradition. The towers, known as castells (meaning castle in Catalan), take different forms, but they all depend on skilled castellers to create the tower and a strong group around the base to support it and soften any falls.

Castells were declared a Masterpiece of the Oral and Intangible Heritage of Humanity by Unesco in 2010, which means, among other things, that they “are recognized by Catalan people as an integral part of their cultural identity, transmitted from generation to generation and providing community members a sense of continuity, social cohesion and solidarity.”

Recently, Shareable chatted with Alvaro Solache, founder of TeamTowers, an organization whose mission is to help develop team competencies through workshops where they convert a group into a human tower. Here are the highlights of that conversation. 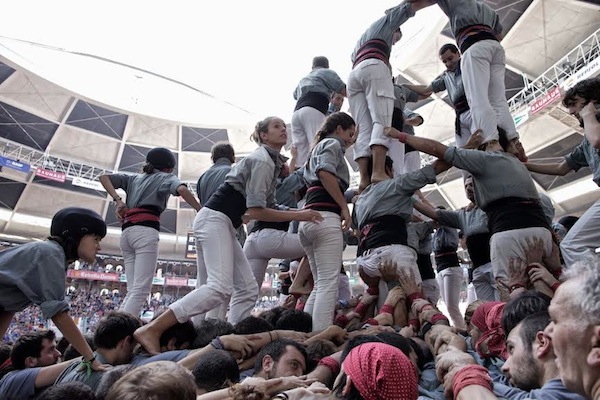 Castellers getting in place for their big climb

Shareable: How long have people in Catalonia been building human towers? What inspired the practice?

Alvaro Solache: Human towers have been built around the world for centuries for different purposes and in different locations, from India to honour lord Krishna, to Morocco to help orphans develop an acrobat career. In Catalonia, the most certain information we have is that this tradition started around 200 or more years ago when farmers discovered that in the south of Catalonia there was a religious tradition called "el ball dels valencians" where they did a three floors tower.

It is said that Catalan farmers from the city of Valls started the towers when the good weather came as a spectacle to do when they moved to other villages. People from the villages helped build higher structures supported them at the base. In the first golden age of castellers, they built towers up to nine floors. In the 1980s, a second golden age started. Today there are more than 70 teams, or colles castelleres, around the world doing human towers during the good weather season from April to November. 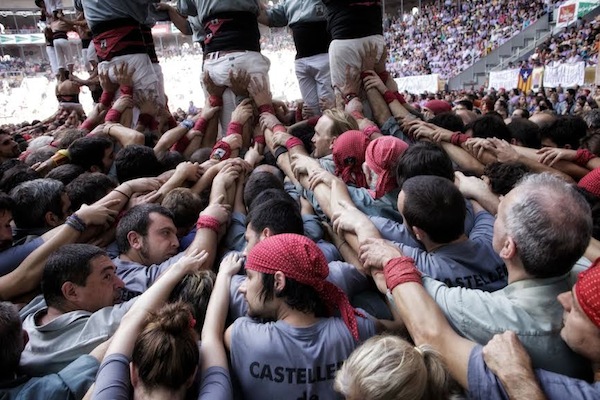 Is there a particular event when towers are created?

Each team has a special day to build towers in their town, with all the families and friends helping build the towers. The tradition in Catalonia is that each village that has a tradition of building human towers invites other teams, or colles, from other villages to join their colla for the big party, the festa major. The event is called Diada Castellera, which means meeting to build towers.

Who creates the towers?

The great thing about this event is that colles are what we can call open organizations. It's a great example of an organization that includes not only the formal members of the association. Any person that wants to help is invited to join the base, or pinya, of the tower. It's in the squares of the villages where this happens. Squares are the center of the social activity where citizens and colles castelleres join to build extraordinary things.

How are the towers organized?

Teams start with four or five level structures and when they increase their skills and size they add more floors to the towers. Each tower is divided into the following three parts:

How do the colles castellers prepare for tower building?

The colles castellers do two things: they train two or three times a week to practice and organize people inside the different structures the colla wants to take to the squares. By practicing, we’ll see which is the best way to organize our tower. They also go to squares on Saturdays or Sundays and they try to do their best.

What’s the importance of the crowd at the base of the tower?

The crowd gives stability to the tower and also security for the climbers and the children. They are 90 percent of the colla. They are the ones that no one sees but they should be rewarded with nice words and care by all the climbers because without them it's not possible to do big structures. One of the nice things about the pinya is that everybody is welcome because everybody can have a function depending on his or her size.

Once the tower is finished, how do you bring it down?

The same way we go up, we go down. If you have a look at videos you will see that we climb by the back of the others members and we go down the same way. We have another way to unload the towers, falling, but we prefer not to try this.

In addition to the creative aspects of the human towers, they serve to strengthen cultural identity, trust, and solidarity. Please tell us more about this aspect of castelling.

For many different reasons, human tower associations have become a national cultural identity for Catalonia. But by their nature, and desire to grow the practice, they have become an example of open, integrative culture that offers something that almost everybody has lost in life: the chance to do an epic thing. We are talking about building structures 12 meters high and we are not joking. It's amazing, it's epic. And we are not superman, we are normal people doing extraordinary things. 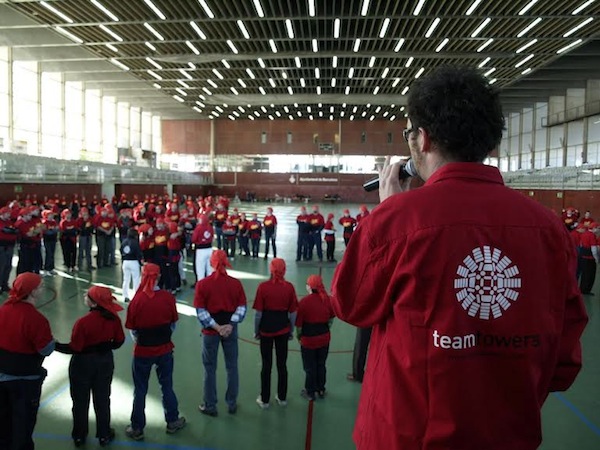 In your work with TeamTowers, you bring groups together to develop team spirit, team competencies and communication through tower-building. How does building towers strengthen teams?

We learn by teaching and we help others learn by doing and sharing our feelings and thoughts. We do a workshop where we convert your group in a colla castellera where we train and build towers in a public space where others can see us.

What is your favorite aspects of building a human tower?

I like all the aspects, from finding the positions for every member of the colla and sharing the knowledge people need, to building the towers with all the colla, and celebrating the success if we are able to unload all the castellers.

The most striking thing for me is the value of music. When we build a tower we bring musicians that watch the tower being built and play the same song, "Toc de Castells." This song has different parts that indicate the following moments:

This is useful for several reasons: we connect everybody–the people that form the colla but also people looking; we reduce uncertainty–even if you are inside the base and you can't see anything, thanks to the music you can know in which stage we are in; and, music gives energy to the universe and ourselves.

Do you have any favorite stories from these team-building human towers?

The best story is the story of all the people. I have a dream that everybody feels the experience of being part of a collas castellera. In this dream we all learn how possible it is to break barriers and do incredible things that will help us to connect with other humans in a physical, mental and metaphysical way.

When we build a tower we are bringing to life a living being for one or two minutes–a being that moves breathes and feels happiness and pain. And we can be part of this giant!

I recommend that everybody, at least once in their life, become part of a castell. Call me to teach your group, tribe or band. You are not going to forget it and you'll be able to dream that this spirit can be translated to others kinds of activities where normal people do extraordinary things.