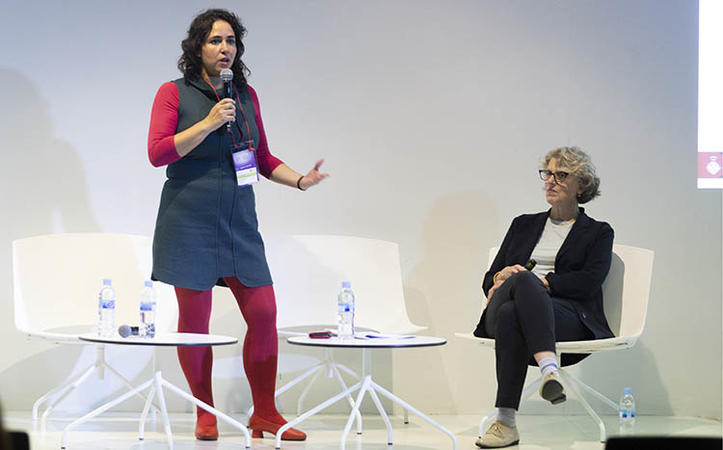 Whether it is growing congestion due to ride-hailing apps like Uber and Lyft, rising housing costs due to Airbnb, or increasing agitation from gig workers being forced to work longer hours for less pay, cities are at the forefront of the battle to control the exploitative platform economy.

As cities deal with these challenges, more attention is being given to sharing as a solution. One of the leaders in the sharing cities movement has been Barcelona, the capital of Spain’s Catalonia region, with more than 1,000 worker-owned enterprises and cooperatives in operation working in 28 different economic areas including sharing of culture, energy, agro-agriculture, and consumption. This includes the Xarxa de Consum Solidari network of consumers’ cooperatives and La Borda, a housing cooperative. One neighborhood, Sants, has 50 cooperatives alone, including an architecture office, a bookshop and a music club, all owned by residents and all of which keep their profits within the community. Even the famous Barcelona FC soccer club — one of the best teams in Europe — is a cooperative sporting association with 175,000 members, all of whom have a voice in deciding the direction and future of the club.

The movement has roots going back more than 60 years in Spain, to the founding of the Mondragon Corporation, a federation of more than 100 cooperatives that employs more than 73,000 people. By one measure, Mondragon ranks among Spain’s top 10 corporations.

We spoke to Mayo Fuster Morell, a social researcher at the Open University of Catalonia and co-author of a new book on Sharing Cities to learn more about Barcelona’s unique collaborative projects, the future of sharing cities, and the city’s recent hosting of the third annual Sharing Cities Summit.

Nithin Coca: What were some highlights from the Sharing Cities Summit?

Mayo Fuster Morell: It went very well. We had two main goals. One was to make possible more collaboration between cities on platform economies [so we can] move forward into concrete common action. And the second one was to increase the number of cities involved because at the first summit, we had 12 cities, and at the second one there were 20.

We were surprised of the response — we got 50 cities, and we were not targeting that many! At some point we had to close the call. We welcomed the response of the cities and the plurality of places they were from, and also the plurality of political governments. The important part of the message is that no matter what is your continent, no matter what is your government approach from an ideological perspective, all cities have a more local dimension, and when it comes to the platform economy’s impact, we share a common view. And this common view, I was surprised how large it is — all cities were sharing that some of the platforms like Airbnb and Uber were taking too much of the city commons. This was not the case four years ago.

One other thing I would highlight [is that] the summit is an example of how you can be inclusive. Normally when you are in technology, these tend to be masculine worlds, and there’s not much diversity. We were able to generate a platform to work on these issues with actors who are diverse, from cities and other places in the ecosystem, and the people themselves, and that’s also important.

Were there any collaborations that came out of the Summit?

There was an agreement to start a task force to develop city collaborations around regulation  There was a lot of interest in the common regulation of platforms — negotiating with Airbnb — but it’s difficult. It involves a significant research investment. You need to know what is the specific situation in each of the cities. So now we are working to get a much more precise view [of] what is the state of the problem in each city, to provide a resource which is simple but allows you to have a good overview of what each city has achieved.

Tell me a bit about the Sharing Cities book you released at the summit?

Within the summit, one of the goals was how to create relationships between research and knowledge institutions and cities. [We also wanted to develop] research that [would] inform the agenda of the summit and sources that could be offered for the cities.

The book is focused on the state of the methods and democratic qualities of [the cooperative] platforms [in Barcelona], and it has the goal of systematizing what we know about [them].

[We were] providing a historical introduction to the evolution of the ecosystem in Barcelona, a chapter on the different cases here, which are good models. We did it in a rush, but with the approach of making knowledge important and present. Now we are publishing it in Catalan and Spanish.

Why do you think Barcelona has been able to host so many interesting collaborative economy projects within its ecosystems? What are the key drivers?

The thing that was more interesting to other cities [was that] eight percent of [our] GDP is dependent on the social economy, so we have a large cooperative movement here. Barcelona is an important program to support the social-oriented platform economy.

There were many cities that did not have a clue about cooperativism — even the declaration of cooperativism [referring to a statement of the principles of the cooperative movement by the International Cooperative Association in 1995]! So there was a lot of interest in that. There were many platforms from Barcelona, and they were happy to find that there are actually good models that are sustainable, running, and could be running in other cities.

What will be your research focus going forward? What’s next for you?

Now we are digging into this program of creating a team for supporting actions between cities. That’s the core of the action that we are doing now.

This year, during the summits in November, I would like to dig more into the relationship with other actors in the ecosystems in the international level. We did not have some way of keeping a communication or collaboration. Policies are not only a matter of city government, but also a matter of civil society or other actors. It’s important that we not only build a coalition of cities, but also a coalition of actors promoting the commons, sharing, in the platform economy.