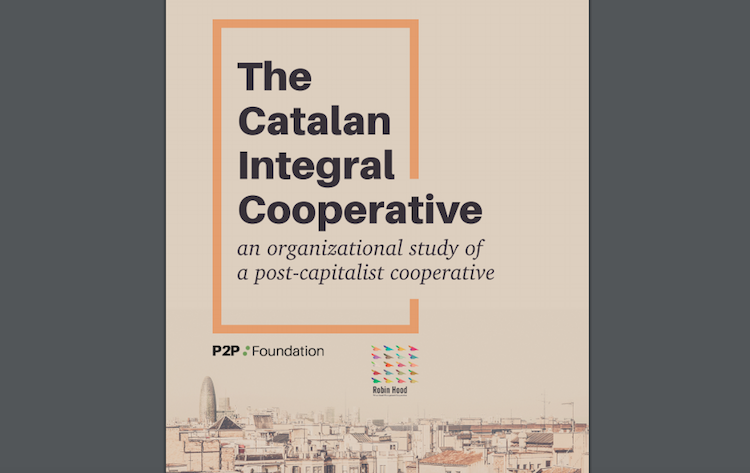 An intriguing blueprint for a post-capitalist world is gradually being built in a converted spa in Barcelona, Spain. Founded by the Catalan dissenter Enric Duran, who made headlines in 2008 after "borrowing" thousands of Euros from Spanish banks and donating it to social causes, the Catalan Integral Cooperative is a wide-ranging operation which encompasses diverse services: a financial co-op, a food pantry, a legal-aid desk, an open-source tool workshop, and a bed-and-breakfast for tourists in a medieval watchtower. It has developed its own local exchange currency — the eco — and launched a cooperative credit mechanism for funding social projects. A readable and eye-opening new report commissioned by the P2P Foundation and the Robin Hood Coop for Commons Transition summarizes the co-op's numerous projects and wide-ranging ambitions.

The goal of the Catalan Integral Cooperative ("Integral" is a Spanish word best translated as "holistic") is to build an anti-capitalist cooperative structure not just for the benefit of its own fee-paying members, but for the Commons as a whole. "The main objective of the CIC is nothing less than to build an alternative economy in Catalonia capable of satisfying the needs of the local community more effectively than the existing system, thereby creating the conditions for the transition to a post-capitalist mode of organization of social and economic life. … It is the conviction of the CIC that the goods required for satisfying the basic needs of society should be freely accessible social goods, rather than commodities," the author George Dafermos writes.

Like many co-ops, the CIC resists hierarchical organization; about a dozen committees manage its day-to-day activities. The co-op itself has more than 2,000 members, whose levels of involvement vary from paid committee members to freelancers (auto-ocupados), to the many subscribers to the CIC's local product exchange networks. The product exchanges provide local farmers and other producers with a market and allow the cooperative to fund its operations with a small percentage from each sale.

The cooperative was formed seven years ago and since then has enjoyed rapid growth. Dafermos spent two months in 2016 studying the CIC, its projects and its aspirations. "It's an amazing and crazy thing, unlike anything I've ever seen before," he says. "On paper, it doesn't really exist, but at the same time, it creates legal entities which allow people, mostly young professionals, to do their own thing. It's a highly ideological co-op meeting practical needs." In other words, the CIC thinks globally and acts locally.

The nerve center of the CIC is AureaSocial, a converted spa in downtown Barcelona which serves as a co-working and workshop space and houses a CIC-run library and food pantry in addition to headquarters. Its daughter projects, including the bed-and-breakfast (called SOM Pujarnol), a tool lab (maCUS), and a self-managed cooperative community, are spread across Catalonia, attracting the interest of increasing numbers of potential members at a key time in history. The report describes it as a "network of projects" that has a long-term aim of creating a fairer world.

"Young people are seeing less hope now than in the past…if you do get a job in the corporate structure, it’s not appealing," Dafermos says. "People want to experiment, and that's why we’re seeing the re-emergence of co-ops in general, and of this one in particular."

To learn more about the CIC's activities, read the report here.