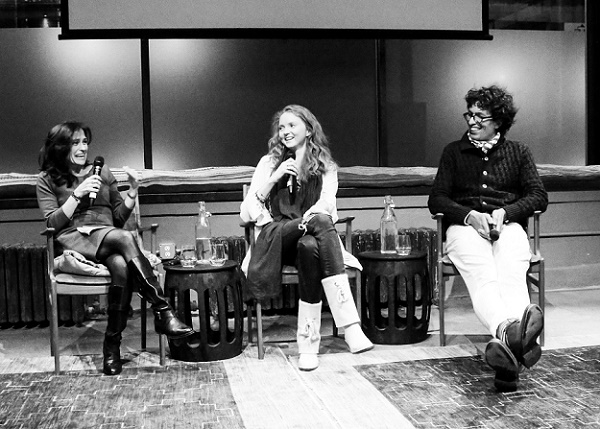 When a supermodel enters the sharing economy, it certainly raises a few eyebrows. Therefore, when Lily Cole came to New York to launch her gift economy platform, Impossible, Let’s Collaborate! was curious to explore the purpose behind the platform and what role it would play in the sharing economy.

On March 18, change agent Susan McPherson moderated a discussion with Lily Cole and her co-founder Kwame Ferreira at Neuehouse. Lily described how her studies at Cambridge and her (recently published) thesis inspired Impossible, where it explores the concept of “utopia.” This idea of utopia led Lily to create a platform that is based on the idea of gifting as a compassionate and circular form of economic exchange. In a gift economy, a person offers something that they possess to someone else seeking it — whether it be an item or a skill — without expectation of receiving something in return. If enacted by the many, this gifting practice will eventually benefit those who have already given, continuing the cycle of public reciprocity.

On Impossible, the website and app allows for strangers to fulfill each other's "wishes" through altruistic giving. You can follow others, search for trending topics, and, of course, offer to fulfill the wish of someone who is within the neighborhood you are currently in. Impossible does not employ a point system, but rather focuses on thank yous as a form of reputation building. For the tech enthusiasts, the site runs on a completely open source platform — similar to Wikipedia's model, anyone can borrow the code and build on it to make their own site — and allows a group of people to contribute to the site itself. In addition, the site decentralizes the policing to the users. It has options to report any wishes or transactions that involve money, violence, or sexual content.

Her belief in a network of strangers granting each other's wishes was strong enough to challenge the status quo, where most transactions between people revolve around money and direct return. The idea that a giving paradigm of this kind is impossible in today's economic culture was the utopia Cole sought to disprove by making it a reality. Lily linked this experience to all types of visions of how perserverance on a seemingly impossible idea will bring it to life by concluding that, "If you really believe in something, pretty much anything is possible."

In response to a question about where they see the site in five years, Ferreira explained how the pair's goals are for the site to subtly develop a movement. Their hope is for the site to achieve this by continuing to build bonds and trust between members, and by incorporating the practice of giving into participants' lives more and more.

Gifting is not limited to the wishes on the site. The development of Impossible came through generous donations of time and resources, including Ferreira from Kwame Corp, the "Father of the Internet" Tim Berners-Lee, Wikipedia founder Jimmy Wales, and Nobel Prize-winning economist Mohammed Yunus, among dozens of other consultants.

Impossible is working to realize Cole's giving utopia by disrupting our embedded relationship with money. But it won't be possible without our participation. She concluded her talk by stating, "The way we live in 2014 is not the only way we've ever lived. There are many ways to live life."

Studying Transdisciplinary Design at Parsons the New School for Design, with a focus on collaborative making as a tool for resiliency, situated within the sharing economy.

Studying Transdisciplinary Design at Parsons the New School for Design, with a focus on collaborative making as a tool for resiliency, situated within the sharing economy.

Things I share: Insights and learnings from my design / research process about collaborative making and collaborative consumption. I can also share my cooking, and graphic design skills!