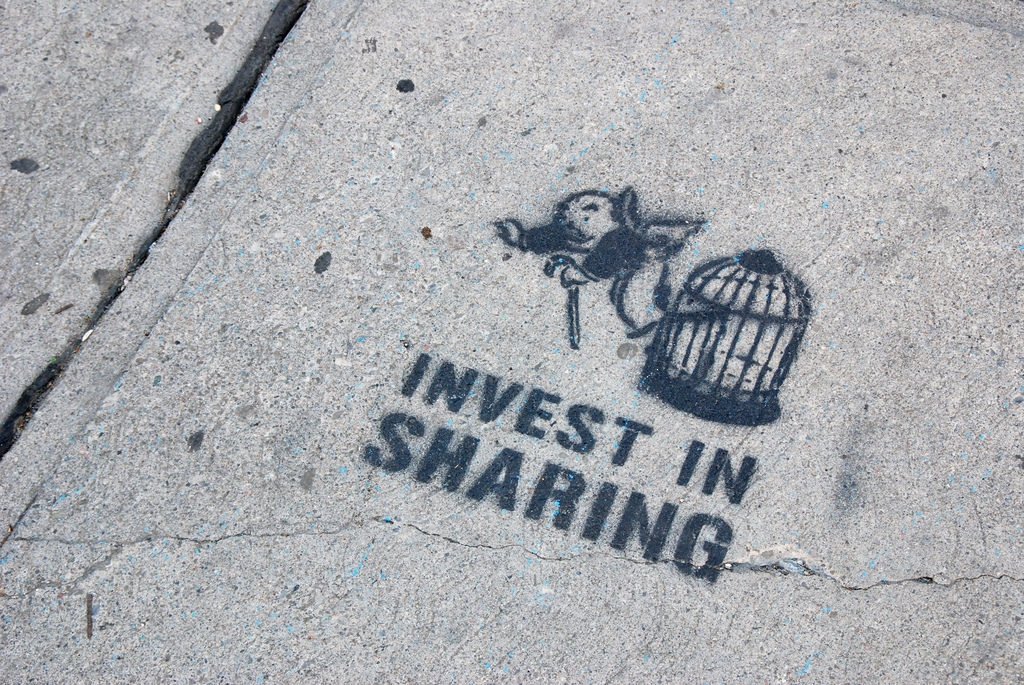 Shareable readers are well aware of the significant concerns about companies that claim to be part of the sharing economy but which do not reflect sharing values. Shareable’s founder has referred to some of these sharewashing firms as "Death Stars platforms" while he and others have advocated for a platform co-op movement.

Meanwhile, the media, local governments and regulators, investors, and entrepreneurs are also a bit unclear regarding what actually constitutes desirable sharing activity. Airbnb and Uber garner many of the headlines — for and against sharing — but many sharing businesses, including those found in Jeremiah Owyang’s Collaborative Economy Honeycomb chart, are somewhere on the spectrum between Death Star platforms and platform co-ops, which are not necessarily interested in creating the next world-dominating billion dollar unicorn, but just to tackle (through sharing business activities) development issues at the local or regional level.

So how are we to have an educated discussion within the sharing community — and with other stakeholders — when there is so much ongoing uncertainty about what the sharing economy is about and when it is something to encourage or discourage? What do we mean by “responsible” and what constitutes a sharing economy startup anyway?

In light of this ambiguity, we have been hard at work trying to dive into the core elements of sharing economy startups based on academic research of business models, as well as emerging literature and popular books such as Peers Inc and Sharing Cities. As a result, we were able to identify several key dimensions that are most frequently considered unique aspects of sharing economy startups. In research we hope to publish in the near future, we analyzed dozens of startups from all of the categories and subcategories of Owyang’s Honeycomb model in order to understand how business models in the sharing economy vary.

One outcome of this project has been a practical tool we call the Sharing Economy Business Model Compass. A compass is both a navigation instrument and a way of defining the scope of something. We don’t seek to provide an absolute magnetic North for the sharing world, but offer a way of making sense of the sharing economy spectrum and organize what is in it in a more coherent and systematic way. It is not a simple classifying tool, but rather a dynamic blueprint for mapping out the efforts of businesses aspiring to enter the space.

As you will see, it contains six distinct dimensions that are unique to sharing economy business models: Technology, Transaction, Business Approach, Shared Resources, Governance Model, and Platform Type. Each dimension has three options representing a continuum from, for example, governance models with concentrated ownership and control to fully distributed ownership and control.

Four of the dimensions range from those more commonly found in traditional market-based sharing economy startups (i.e. platform capitalism or Death Star platforms) to more commons-based platform co-op models; whereas the remaining two dimensions (Technology and Shared Resources) are not on a continuum in the same way, in that market-based and commons-based business models can utilize any of the three choices. 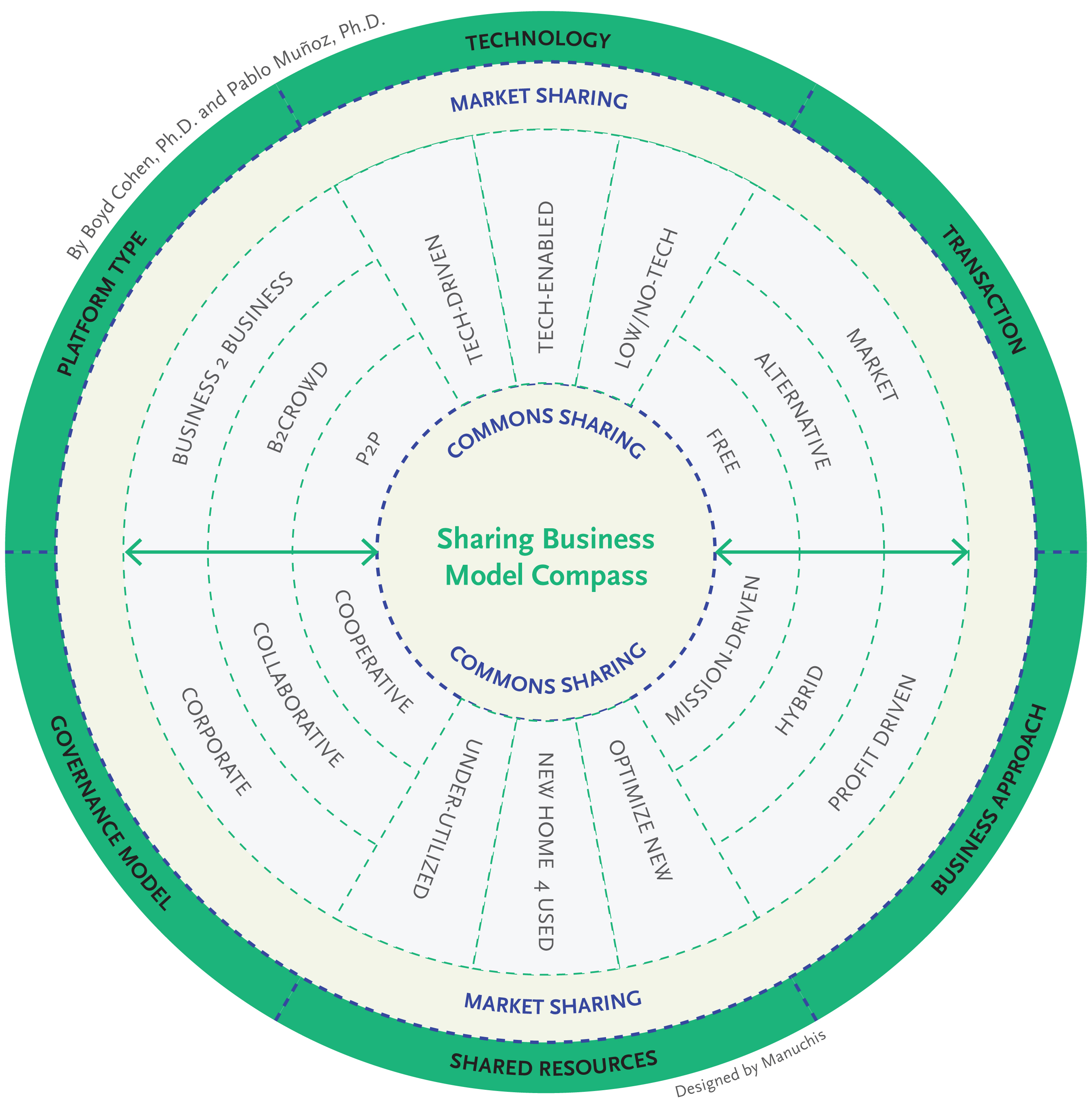 How to Use the Compass?

That depends on who you are and what role you play in the sharing economy.

One way to use it is to leverage it as a way to explain the pros, cons, and implications of existing sharing startups. This could be an exercise in university classes.  We will be using it at EADA Business School and University of Leeds, for instance. The media and local government could also use this framework, in a similar way, to understand the nuances of the business models and then, in the case of regulatory agencies, improve their specificity regarding what type of sharing activity they wish to encourage or discourage.

Let’s take Airbnb as a starting point, going clockwise. They are clearly tech-driven, as the platform is what facilitates the global network of shared spaces. They are market-based regarding the transaction, as they allow owners of spaces to charge whatever the market will bear and facilitate the rental of spaces on the platform in return for a healthy cut of the transaction. Airbnb is fully profit-driven although some (including their founders) would try to argue that they are a hybrid because they have social purpose initiatives like housing for disaster victims.

One of the trickiest parts of Airbnb’s model for regulators is that some people use it for optimizing under-utilized resources (i.e. extra space in a resident’s own home) while many others (now a majority on the platform) rent out entire spaces, resulting in the reduction of housing stock for local residents. Airbnb’s governance model is corporate in the sense that they do not engage users in collaborative governance or profit-sharing with the community. Finally, the Airbnb model is reliant on a peer-to-peer connection. As you can see, Airbnb is primarily a market-based sharing company since Transaction, Business Approach, and Business Model are on the outer ring.

Bliive is one of the world’s largest time banks. Instead of facilitating cash transactions for services (like Task Rabbit), Bliive enables users to provide services — guitar lessons, painting, accounting, etc. — to others in the community and, once completed, they receive Time Dollars for receiving valuable services from others.

So let’s try the Compass with Bliive: We would argue that Bliive is tech-enabled, in that the technology connects users; but, in the end, much of the service provision is in person. As far as Transactions, Bliive utilizes alternative approaches because users receive time credit instead of cash compensation. Regarding Bliive’s Business Approach, we clearly put them in the mission-driven category.

Here is their mission statement:

Bliive is a movement that believes in collaboration as a way to revolutionize the concept of value, bringing people together through experience sharing.

Thus, showing the importance in each and every daily activity, in each little knowledge shared or that certain talent you have, we will tell the world that everyone has something worth sharing.

While an individual’s time is, perhaps, less under-utilized compared with, say, their car, we would argue that time banking in the Bliive system is used by people with time available outside of their normal daily activities. Bliive is a big believer in collaboration and has, for example, an ambassador program to “take the collaborative mindset to the reality of his/her community and networks.” Bliive is also a peer-to-pper platform. We would argue that Bliive is much closer to a platform co-op, but it is not fully there, as they are a blend — which is true of most business models we studied. There is not so much black and white or good and bad, but rather there is a lot of grey in the sharing economy.

So, how can sharing startups use the compass? We believe it can be used as a starting point for decisions about values and the business model early on in the startup process. If the founders aspire to be more like a platform co-op, they would opt for strategies closer to the center. These ideas can be tested later on against alternative combinations so entrepreneurs have a chance to make an informed decision of what might work in their prospective markets.

With respect to the two dimensions that are less of a continuum — Technology and Shared Resources — a discussion about capabilities and desired impact would influence those decisions. Tech-enabled solutions will generally lead to larger impact due to the inherent scalability of such models. While, generally speaking, making better use of under-utilized resources result in more “sustainable” business models, this is not always the case.

Hopefully, the sharing community can see the value of this work, which is the result of insights gleaned from sharing business model research we have conducted over the past few years. We believe the Compass is the first of many tools that could be developed by and for the sharing community.

We are planning to release a Sharing Business Model Canvas (see the original business model canvas here) which utilizes the dimensions in the Compass and draws on the standard Canvas to allow startups to articulate their business model decisions on one page. The Compass introduces those aspects unique to a sharing business model but requires other elements common to all business models to bring it to life. It is, therefore, open for others to join and continue our work.

Looking ahead, we could also envision someone creating an online business model generator or even more — a knowledge sharing platform that maps out different combinations of business model choices or includes a series of questions for entrepreneurs to guide them through the best choices given their aspirations. We also expect that the sharing community will find many creative ways to use the Sharing Business Model Compass and help the movement progress.

If you use it for your business, community, or policy-making, we would love to hear from you.