Suburbs Ain't What They Used to Be - Shareable
Skip to content 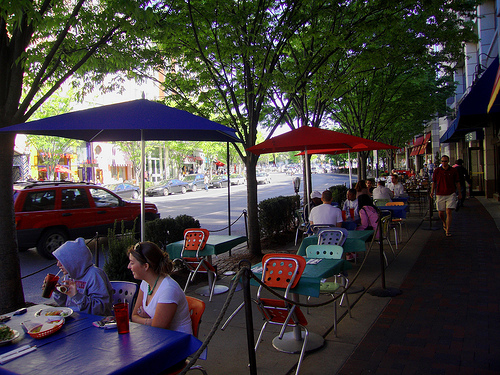 I used to good-naturedly razz an old college friend of mine about moving to the suburbs. With a worried look, I would whisper that it’s a good thing people in his well-heeled suburb don’t know their neighbors, otherwise they would run him out of town as a dangerous radical. He always laughed along.

But the truth is he lives only one block beyond the Minnneapolis city limits, and he could credibly fire back at me that his neighborhood is more urban than mine. While I am thrilled at the opportunity to stroll to numerous coffee shops, restaurants, bakeries, bars, and parks — so can he. But he’s also a short walk from a food co-op and liquor store and just six blocks from a bustling downtown business district with a drug store, post office, movie theater, bank and shops galore. I must climb on my bike or into my car to conveniently reach these necessary destinations.

That’s one of the little known secrets of metropolitan life today, according to noted urban scholar Christopher Leinberger, a fellow at the Brookings Institute and professor of Real Estate Development at the University of Michigan.

In a recent blog for The New Republic, entitled “Cities Versus Suburbs is the Wrong Debate”, Leinberger stresses what really matters is whether a neighborhood is walkable or not. And this distinction is becoming ever more important as gasoline prices nose toward four bucks a gallon for the second time in three years at the same time as the economy stays flat and the world continues to deal with climate disruption and social alienation.

Leinberger points out that the San Fernando Valley, even though it’s officially part of Los Angeles, is unmistakably suburban while the nearby suburb of Pasadena revels in an agreeably urban atmosphere. His work also shows that it’s not only pre-World War II suburbs like Pasadena, or Edina (my friend’s home), where people are out on the streets getting exercise, chatting with their neighbors and generally enjoying themselves.

Over the past 20 years numerous new walkable communities have grown up around transit stops or other spots outside the city limits.

From the 1950s through the 1990s, American real estate developers and urban planners forgot how to construct anything but auto-centric sprawl, even for projects inside cities. But a new generation of town builders is rediscovering the great American tradition of giving customers what they want — and today many new homebuyers want to walk. A recent study from the National Association or Realtors ranks easy access to walking and biking trails the 2nd most desired amenity among homebuyers today. (Easy access to a freeway is first.)

In his 2008 book The Option of Urbanism (Island Press), Leinberger surprised many with his list of the most walkable neighborhoods in the 30 largest metropolitan areas — almost half were outside central cities. That’s why he ranked Washington, D.C. as America’s most walkable region instead of New York City. With new town centers sprouting around stops on the metro rail system, D.C.’s suburbs are now more urban than New York’s.

In spite of all this progress, I won’t be joining my buddy out in the suburbs anytime soon. I still find many advantages to my city neighborhood, from historical charm to appealing diversity on multiple levels, which compensate for not living near a grocery store. Plus, most of the truly walkable suburbs feature sky-high housing prices, even after the real estate crash– a sure sign of their popularity even if it means many people could never afford to live there.

But I must admit it makes no sense for confirmed city dwellers like me to smugly dismiss all suburbs as nowhere places where people think alike and no one ever sets foot outside their automobile.