Who Says Suburbs Can't Be Cool? - Shareable
Skip to content 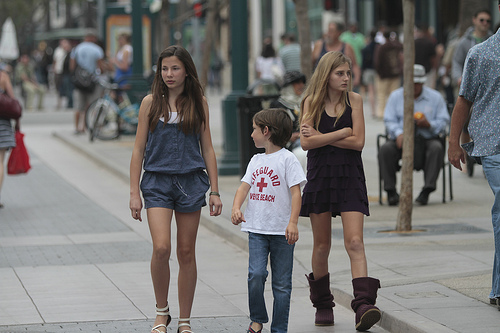 In a surprise last week, the Washington Post  ran an article defending suburbs from the usual charges of being white, wealthy, boring, selfish, right-wing and environmentally-abominable places.

More than half of Americans now live in suburbia, including most subscribers, so it’s no surprise the newspaper would take an opportunity to reassure its readers that they live in perfectly fine communities.

The surprise was who wrote the article—William Upski Wimsatt, a champion of hip hop culture who grew up on Chicago’s South Side and in 1994 published a book titled Bomb the Suburbs.  Wimsatt took pains to explain that “bomb” was youth culture slang for graffiti, but he left little doubt about his feelings toward the ‘burbs.

With his new book Please Don’t Bomb the Suburbs, Wimsatt seems to have made a 180-degree turnaround, confirming the conventional wisdom that yesterday’s youthful firebrands wind up as today’s prim conservatives.  But on a closer look, I think suburbs may have changed more than Wimsatt over the past two decades.

In his article, he busts many stereotypes about surburbanites:

*One third of the nation’s poor now live in suburbs, with the poverty rate growing five times as fast in suburbs as in central cities across the nation’s 95 largest metropolitan areas.

*Fifteen percent of students in suburban public schools are African-American, 20 percent are Latino, and six percent Asian-American—a far cry from the lily white enclaves we imagine.

From the ‘50s through the ‘80s, suburban populations swelled as middle-class families sought refuge from urban ills.  But today concerns like crime, drugs, gangs, failing schools, substandard housing and the so-called “culture of poverty” have taken up residence outside the city limits.

While these problems are concentrated in blue-collar suburbs, the future for many new upscale suburbs looks increasingly cloudy. According to Stan Humphries, chief economist of the Zillow online real estate research firm, outer ring suburbs have experienced “substantially higher total declines in home values” than areas in the center of metropolitan areas.

And as gas prices rise above 3 bucks a gallon for the second time in three years, the long commutes associated with life in suburbs may drive even more people away from new developments on the fringes of town.

On top of that, many suburbs lack the basic amenities that a younger generation of home buyers demand: walkable neighborhoods with sidewalks, lively public spaces and convenient transit connections.  And young people will have more clout in the real estate market than ever before, because they can buy a house without having to sell one that may have lost much of its value over the last four years.

It’s important to note that suburbs, like city neighborhoods, are not all alike.  Most cities are home to both struggling areas clobbered by poverty and the foreclosure crisis as well as revitalized neighborhoods full of historical character, independent businesses and bustling streetlife.  Suburbs, meanwhile, run the gamut from sequestered gated communities and strip mall havens to pre-World War II districts and New Urbanist projects that feel like city neighborhoods.

That explains why Wimsatt is not crazy when he declares suburbs can be cool.  In the D.C. area, he reports, the inner city go-go music scene is now centered in Prince George’s County, Maryland, while spoken word artists perform in once white bread places like Rosslyn, Virginia and Kensington, Maryland. The progressive café/bookstore Bus Boys & Poets (named after a Langston Hughes poem) opened a branch in Arlington, Virginia. At the same time, he notes that many cities have transformed themselves to look like suburbs with big box stores, vast parking lots and wide four-lane streets.

Communities that thrive in the 21st Century, wherever they are located, will be those that work to create urban advantages: enough population density to foster public transit, walking and downtowns; diversity in race, culture and even income. What’s most important, according to Wimsatt, will be “increasing our sense of shared identity.”

Travel + Leisure magazine recently compiled a list of the 25 coolest suburbs coast-to-coast.  What they share in common is walkability, public life and a distinct sense of having a THERE there.