My feet are completely blistered, my bones are sore. I'm dehydrated, bruised and beyond exhausted. I've spent four days on the streets of Chicago, running through streets and alleys, cameras strapped to my body, frantically trying to take in as much information about the protests surrounding the NATO summit on Sunday and Monday.

For two days, world leaders gathered in Chicago to discuss what tens of thousands of activists described as the world's largest game of Risk, where the stakes amount to life and death for citizens around the globe. 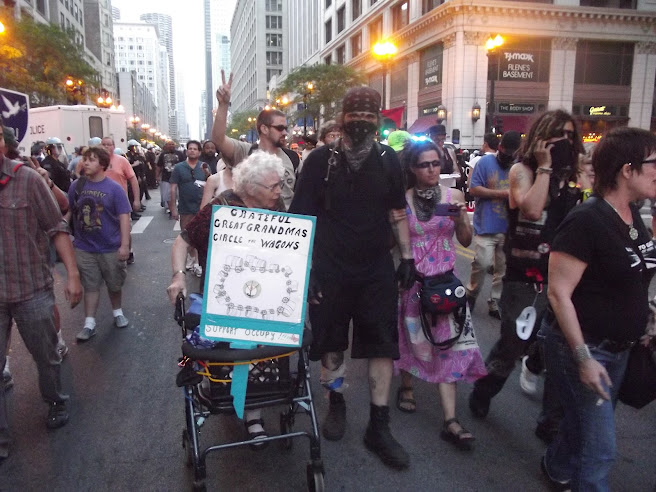 Some might accuse me of hyperbole, but considering the massive amount of civilian casualties (including women and children) in countries like Libya and Kosovo, bombed by NATO forces, the silent voices of the dead would probably disagree.

For the average Chicago resident, hosting the NATO summit fell short of what Mayor Rahm Emanuel predicted in nearly every way. City officials and other higher-ups in the Democratic party heralded the meeting of world leaders as a chance to showcase Chicago as a “world class city,” hoping it would be a boon to the local economy. We were assured of peace in the streets. According to officials, massive security spending will be reimbursed by the federal government, though the city's coffers remain empty.

The city spent months preparing to host the summits, as did activists both locally and nationally. Thousands bused into town beginning many days before the summit, but Chicago residents had been chattering about them many months prior. Many concerns were over logistics – hosting world leaders means an incredible amount of security which would snarl traffic, make traveling difficult, and shut down business as usual in the city for days. 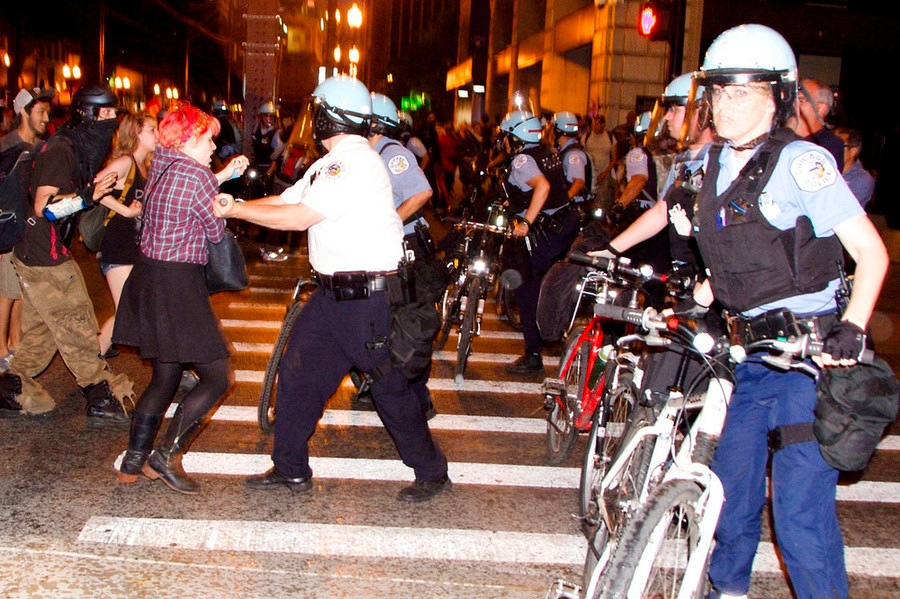 Between media hype surrounding potential protester violence, resulting in local businesses boarding up their windows (and shutting down completely for a few days, in some cases,) and the logistical inconveniences created, authorities did half the job of protesters for them by effectively shutting down the city. Places often bustling with tourists and traffic were virtual ghost towns, as many people wanted to avoid dealing with the drama a meeting of world leaders who often ignore their subjects creates. 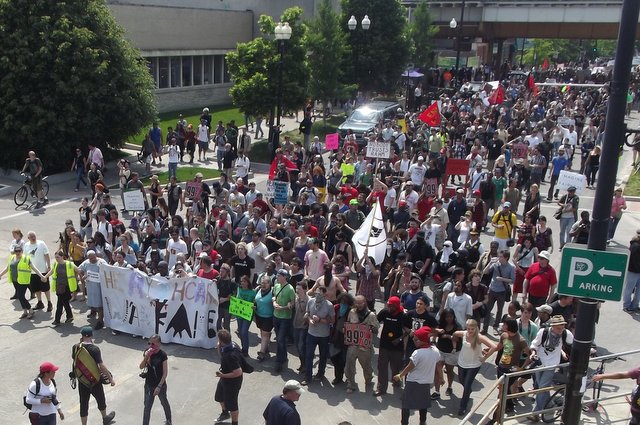 On Saturday, May 19th, activists who came to Chicago to protest the NATO summit held over the weekend headed to the city’s north side in a show of solidarity with local activists fighting to save six neighborhood mental health clinics already closed or slated for closure. Photos by Aaron Cynic, more at Diatribe Media.

During the months of buildup to the summit, local activists managed to connect NATO to a host of issues which affect the residents of Chicago on a daily basis. Our mayor and city can afford to pay for the 1% to play, but can't afford to fix our crumbling school system, mental health care system, public transportation and more. Members of various activist groups, including the Mental Health Movement, Stand Up Chicago, Occupy Chicago and many more staged countless marches, rallies, sit ins and occupations. 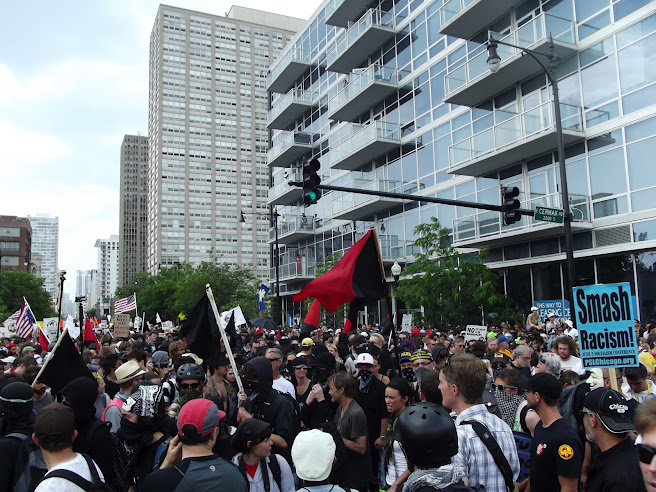 Two local clinics closed by the city still have a 24 hour presence maintained outside their barred doors. A coalition called CANG8 and Occupy Chicago both spent months making banners, obtaining permits, planning routes and rallying activists to shout through the streets in one clear, deafening voice “NONATO.” Meanwhile, the city prepared for war, militarizing its police force with shiny new “less than lethal” weapons, body armor, and surveillance equipment to confront what most activists were planning as a peaceful protest.

The march continued snaking through the streets for hours, and the crowd slowly dissipated, but hundreds still swarmed the streets. Eventually, at another point where protesters were stopped, a Chicago police van attempted to push its way through the crowd. As protesters attempted to stop the van from pushing its way through demonstrators, the driver hit the accelerator, striking at least two people and sending one to the hospital.

These instances and others were the catalyst for the mood of Sunday's march on McCormick Place, where more than ten thousand marched for miles down Michigan Avenue to show their disapproval for NATO. The main march was completely peaceful and permitted, but as we drew nearer to the end point, one could feel the tension on both sides of police lines. A group of veterans ceremoniously threw medals they had been awarded in the direction of their generals from a makeshift stage, each telling their story of why they no longer wanted them. 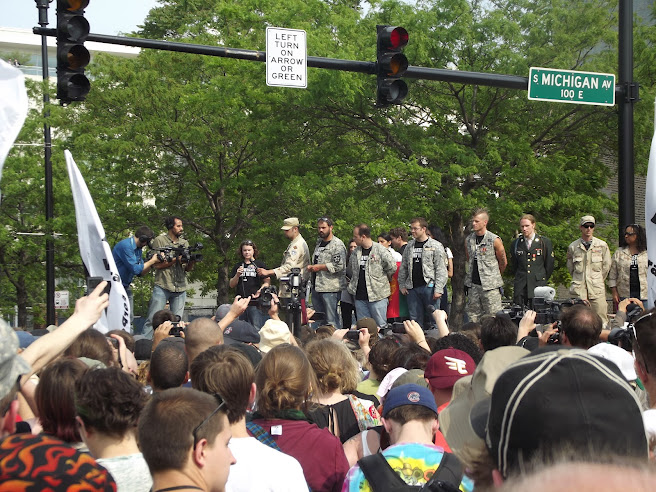 a group of veterans against the wars in Iraq and Afghanistan join anti-Nato protest in Chicago May 20 #OWS twitpic.com/9ngbfd

A woman from Afghans For Peace spoke of the continued struggle Afghan people face under NATO occupation. Well before the planned conclusion of the rally, police began massing, riot gear at the ready, and the more militant marchers readied themselves for an imminent confrontation everyone seemed to know would take place when dispersal orders went down.

Thousands of people streamed out of the area while others decided to stay and attempt to push forward, towards the actual location of the summit, and the gloves came off. Police wielded their batons indiscriminately, striking protesters, journalists and legal observers. Protesters pushed back, flinging a barricade at one point, throwing bottles at another. Many were injured or arrested. The area was cordoned off, no one was allowed in or out. Friends, family and colleagues were cut off from information regarding their brothers and sisters, and the predictions of blood staining the streets of Chicago came true. In the aftermath, protesters regrouped and led non-permitted marches through The Loop. On Sunday evening, they converged on the Art Institute, where Michelle Obama hosted dinner for NATO dignitaries. The mood was tense. Throughout the rest of the summit, protesters and police played cat and mouse games in the streets, but thankfully, the same level of violence did not occur.

On Monday, they marched on Boeing headquarters to highlight the corporation's connection to the military industrial complex, and later held a press conference which turned into a dance party in front of President Obama's campaign headquarters. In the evening, a few hundred marched through the loop to protest the Immigration and Customs Enforcement office, responsible for so many detentions and deportations.

What I witnessed on the streets of my city for nearly a week showed the dichotomy which exists between the state and those who want to change or completely oppose it. Activists who fight for change always face intimidation tactics. But the larger the organization, the harder the push back. Fighting city hall to keep a mental health clinic open or create an encampment in the park was difficult enough, but fighting a global war machine engendered a reaction the likes of which some people had never seen. 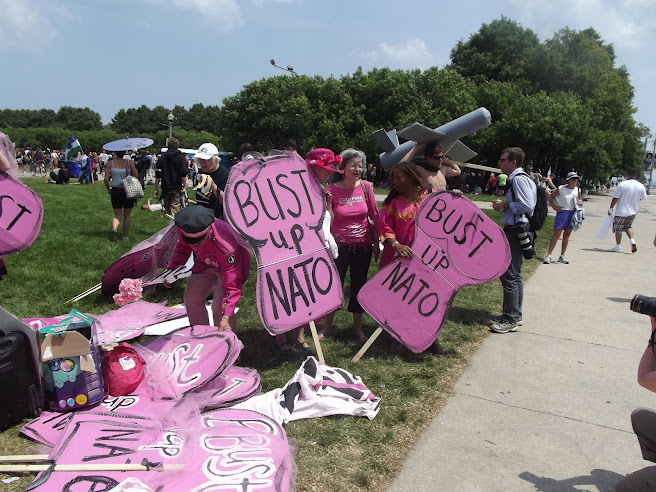 Still, activists persevered, adapted, and took care of each other. When I ran out of water, everyone from legal observers to masked anarchists were happy to share what little they had left. When various protesters faced targeted arrests, others stepped in to try to prevent them. Hundreds marched for miles to show solidarity at the jail the arrested were taken. Street medics took care of the injured and reminded the exhausted of the wellness center created for them. Independent journalists from all over the world banded together in solidarity, sharing information, looking after each other and supporting those who were targeted for surveillance or arrest by law enforcement. People who were relative strangers before they hit the streets together shared some of the longest and most caring hugs I have ever seen. 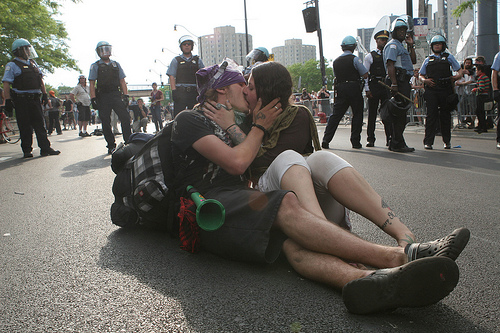 If it's one thing I can take away from observing, writing about, and participating in the protests at the NATO summit, it's that creating community will be what saves the world. Systems of alliances and mutual defense pacts continue the same “us versus them” Cold War mentality which has left the world littered with a class structure that no state can fix. But while the rich and powerful ate well and sat in comfortable air conditioning moving pawns across their chessboards, those in the streets forged friendships and shared struggles which created bonds that will outlast any empire.

Aaron Cynic is the founder of Diatribe Media, an independent cooperative that since 2003 has featured and created content in forms ranging from zines to panel discussions and

Aaron Cynic is the founder of Diatribe Media, an independent cooperative that since 2003 has featured and created content in forms ranging from zines to panel discussions and podcasts highlighting independent voices and interests. He also produces various zines, and contributes regularly to Chicagoist along with many other outlets such as Truthout, Disinformation, The Occupied Chicago Tribune and others.