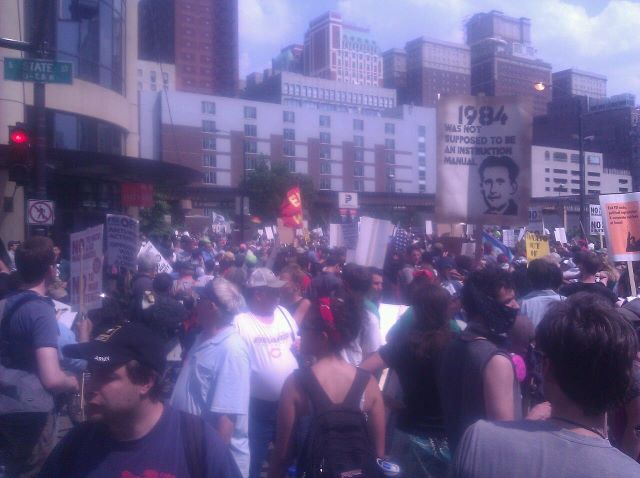 The past weekend was a major one for the global struggle against austerity. Tens of thousands marched against the NATO summit in Chicago, as part of ‘Blockupy Frankfurt’ outside of the European Central Bank, and against Draconian new laws targeted at the ongoing student strike that more or less make protesting illegal in Quebec. There is one major similarity that runs through all three of these situations, one which points to the direction that these movements are headed in and which reflects a general determination by those in power: absolute crackdowns by the police.

This is manifest in different ways. In the days leading up to the respective summits, Frankfurt and Chicago were covered in miles and miles of barricade. In both cities, police from surrounding states were sent in to augment the local police force. Both cities are in de-facto states of emergency, and while they deployed different tactics (Chicago preferred tremendous force to arrests, chasing marches in circles and beating them with night sticks, Frankfurt gave ‘personal bans’ that make it illegal for certain protesters to step foot in Frankfurt and made mass arrests) both functioned under a siege mentality that seems more appropriate for war than for what have been entirely peaceful protest movements (unless you somehow believe that the breaking of windows and property consitutes violence, in which case you’d be wrong, but would still have to use the phrase ‘overwhelmingly peaceful protest movements’). Chicago was named a “special security event”, giving the police all sorts of special powers to stop protesters, while Frankfurt skipped the Orwellian double talk and just literally made protest illegal for the four days of “Blockupy”.

In Quebec, things are similar, if even more dramatic. In a shocking and fundamental change of law that strips Quebecoise of the right to assembly, the Charest government passed “loi 78” on Thursday May 17, which was composed so hurriedly that its provisions were hand-written when they were put into law. The law has so many repressive facets that I can only link you to more thorough coverage, but it de facto makes the current student strike illegal (which was its intention), with punishment for its violation so brutal it could shut down student associations for years. It’s very possible you haven’t heard of the student strike that will see its 100th day on Tuesday, despite the fact that it is one of the largest student mobilizations in history. This law, and Quebec’s student movement in general, has received almost no news coverage in America. We are so accustomed to the spectacle of massive police force being arrayed against protest that we rarely question the political implications of that force. For one widely discussed example, last fall, Oakland closed 5 elementary schools in order to save $2 million dollars, where as the hyper violent anti-free speech policing of Occupy Oakland has cost over $5 million dollars to date. Imagine if Occupy Oakland hadn’t been violently evicted. What if it hadn’t been policed at great expense, but instead, had been allowed to exist as a forum for public debate, protest, and mutual aid? Is Oakland better off without those schools and without Occupy?

Chicago is projecting a cost of $65 million for policing NATO (and such official projections are often dwarfed by actual expenditure, only ever revealed long after the fact). As a result of a 2012 budget deficit, however, this year Chicago libraries will be closed Mondays and almost all of the book shelvers who work in the system will be laid-off. Savings? $10 Million. Does it seem possible that $55 million would adequately police the 2 day Nato summit, saving $10 mil for all those libraries? Realists will argue that this is not how budgeting is done, that it’s never that simple; and while literally that’s true, politicians rarely say “give the library money to the police”, at least in public, it’s also besides the point.

Because this is part of a larger paradigm, the one that people gathered in Montreal, Chicago and Frankfurt are protesting. It reflects a political consensus in which there is an unlimited budget for the police, and the real purveyors of violence in this society, unlimited tax cuts for the rich and corporate citizens, while universities, schools, libraries, sanitation systems, roadways, public transit, welfare and food stamps, counseling and free clinics all must close to meet budget targets.

When seeing the reports of police brutality emerging from Frankfurt, Montreal and Chicago (and you can’t give cops that much power and leeway over a city without having them start beating peaceful protesters) its important to remember that the violence isn’t just being pointed at the bodies of occupiers, striking students and Indignados. Instead, it is a doubled violence, because that money is also being taken away from services. Each hour the police take the field is another day the 79 public libraries of Chicago could be open, each $1 million hour of policing could be 75 jobs, or food stamps for 200 Chicago families for a whole year. The FEUQ (a student organization in Quebec) estimates that the cost to the government of the student strike, between extra policing and teacher salaries, is over $100,000 per hour. If that figure is accurate (and it doesn’t take into account the money lost by businesses closed by the nightly protests) the government has already spent the savings of the tuition hike ($265 million) in 100 days just trying to repress the strike.

But when it comes to the decisions being made by the government, it’s not about the money. It reflects more than just an anti-left or anti-protester sentiment, it reflects the priorities of a society, one which actively chooses violence and inequality over services and peace, a democracy only by and of those people and businesses who can afford a lobbyist or congressman.