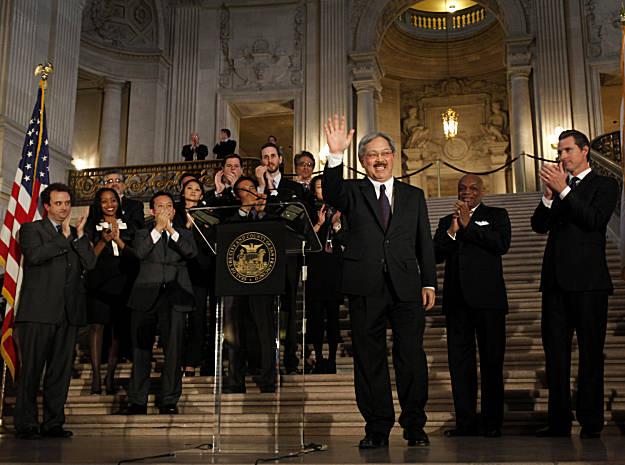 It's an important day in the sharing economy.

Mayor Edwin M. Lee of San Franciso announced today the formation of The Sharing Economy Working Group, the first of its kind in the U.S. and perhaps in the world. The purpose of the working group, "is to take a comprehensive look at the economic benefits, innovative companies and emerging policy issues around the growing 'sharing economy'”. This could catalyze other cities to take similar action.

As one of the epicenters of the emerging sharing economy with companies like Airbnb, Taskrabbit, MeshLabs, Getaround and RelayRides calling it home, San Francisco is uniquely positioned to innovate in the policy realm. “The growing ‘sharing economy’ is leveraging technology and innovation to generate new jobs and income for San Franciscans in every neighborhood and at every income level,” said Mayor Lee. “As the birthplace of this new, more sustainable ‘sharing economy,’ San Francisco must be at the forefront of nurturing its growth, modernizing our laws, and confronting emerging policy issues and concerns.”

Shareable is the leading nonprofit advocate for the sharing economy in San Francisco, as well as providing education around the need for new policies to support sharing, mutual aid, and co-production in cities. Shareable held the first summit on the topic, ShareSF, in May 2011 with keynotes by Jay Nath, then the City and County of San Francisco's Director of Innovation, Lisa Gansky of MeshLabs, Janelle Orsi of the Sustainable Economies Law Center, and representation from San Francisco's department of environment.

Our 20-part series launched in September 2011, "Policies for a Shareable City", was an outgrowth of ShareSF. Written by lawyers at The Sustainable Economies Law Center, the series has outlined the need for new policies in car sharing, parking sharing, ridesharing, housing and workspace sharing, open and green spaces, urban agriculture, and tool sharing – much of the initial focus of San Francisco's new Sharing Economy Working Group.

Shareable is proud to have raised awareness about the opportunities the sharing economy holds for cities and the policies needed to realize them. While Shareable may have influenced San Francisco along with other organizations like Airbnb, MeshLabs and SPUR, this bold initiative demonstrates visionary leadership by Mayor Lee, President of the Board of Supervisors David Chui, and Supervisors Kim and Wiener. They are taking the development of this paradigm shift in how citizens create and share value in a critical direction, one that promises to turn cities into even more powerful platforms for sharing, perhaps humanity's best chance at creating a resilient global civilization. They recognized that a unique constellation of community groups and companies with the potential to create significant economic, social and environmental benefit for the city were coalescing, and acted decisively to give them a forum.

Other mayors would do well to follow suit because of the low cost and huge benefits of sharing solutions to cities and citizens. Additionally, I encourage community groups and sharing entrepreneurs to create sharing economy summits with city officials or otherwise engage city leaders. You may be surprised at their responsiveness as I have been here in San Francisco.

Cities are looking for innovative solutions to the challenging triple-crisis of economy, social division, and environment. Sharing is unique in that it can address all three at once. It's a systemic solution, one being used across the globe where the growth economy is failing to adequately serve people. This move by San Francisco may be a signal that the time is ripe for citizens to increase engagement with cities around the sharing economy, and for sharing groups and companies to work together for urban policies that broaden access to wealth through voluntary and market mechanisms.

Though yet to be constituted, San Francisco's Sharing Economy Working Group may be a model for other cities to emulate. It will include a diverse stakeholder group including numerous city departments, neighborhood and community statekholders, and sharing economy companies. This should better ensure that benefits of the sharing economy are felt broadly and balanced between different stakeholder groups. We applaud Mayor Lee's recognition of the sharing economy's potential to alleviate wealth disparities. And we hope that city leadership will find ways to realize that potential. Shareable will continue to advocate for action in this direction.

Get involved. Shareable is cohosting a public forum about the sharing economy on April 3rd, 2012 with SPUR, SF.Citi, and TechCentralSF featuring Mayor Lee. Please register here. More information about San Francisco's Sharing Economy Working Group and the related event is in Mayor Lee's press release below.

San Francisco, CA—Mayor Edwin M. Lee, Board of Supervisors President David Chiu and Supervisors Mark Farrell, Jane Kim and Scott Wiener today announced the nation’s first-ever policy group formed to take a comprehensive look at the economic benefits, innovative companies and emerging policy issues around the growing “sharing economy.” The sharing economy, also known as “collaborative consumption,” uses technology and social media to promote the sharing and re-use of underutilized assets such as cars, bikes, tools, rooms, spaces, skills and other goods. The growth of the sharing economy has been driven by the success of innovative companies and organizations like City CarShare, ZipCar, RelayRides, Airbnb, Getaround, Taskrabbit, Shareable, Vayable and more, many headquartered in San Francisco and creating a growing number of local jobs and local economic benefits.

“The growing ‘sharing economy’ is leveraging technology and innovation to generate new jobs and income for San Franciscans in every neighborhood and at every income level,” said Mayor Lee. “As the birthplace of this new, more sustainable ‘sharing economy,’ San Francisco must be at the forefront of nurturing its growth, modernizing our laws, and confronting emerging policy issues and concerns.”

“The Sharing Economy is promoting sustainability and creating new economic opportunities for San Franciscans across the socio-economic spectrum,” said Board of Supervisors President Chiu. “It’s time for San Francisco to take a comprehensive look at our existing laws and regulations to consider this innovative new economy’s benefits while addressing real community impacts and concerns.”

“The many local companies driving the innovative ‘sharing economy’ are here to stay and will be a growing part of our City’s future economy,” said Supervisor Farrell. “As policymakers, we must make sure our 21st century economy isn’t strangled by outdated laws and rigid regulations written in the last century that never envisioned what technology makes possible today.”

“Whether it’s sharing bikes, cars, apartments or tools, we must bring impacted communities and stakeholders together to develop model policies that protect public safety, reflect our values and ensure that the benefits of the ‘sharing economy’ extend to all San Franciscans,” said Supervisor Kim.

“San Francisco is at the center of a new, sustainable economy where peer-to-peer marketplaces are turning underutilized assets and resources into new jobs, income and community connections,” said Supervisor Wiener. “It’s time to take a fresh look at our City’s laws and policies to address neighborhood impacts and emerging issues while supporting the innovative sharing economy’s real benefits and growth.”

The Sharing Economy Working Group will bring together City Departments, neighborhood and community stakeholders and sharing economy companies to explore San Francisco’s existing land-use, planning, tax and other laws that impact or are impacted by collaborative consumption and explore policy alternatives and legislation to modernize those laws and/or address emerging impacts and issues. In addition to the Mayor’s Office and the Board of Supervisors, the Sharing Economy Working Group includes the Planning Department, Department of Building Inspection, Fire Department, Police Department, Department of the Environment, the San Francisco Municipal Transportation Agency (SFMTA), Department of Public Health, the City Controller and Treasurer/Tax Collector’s Office. Among the policy areas the Sharing Economy Working Group will focus are:
·        Carsharing, parking-sharing & ride-sharing
·        Bike and scooter-sharing
·        Shareable housing, commercial spaces and workspaces
·        Shareable recreation & green spaces, rooftops, urban agriculture and food
·        Shareable tools, skills and other commercial enterprises

“I applaud Mayor Lee and San Francisco Supervisors for recognizing that the sharing economy and new policies to support it are key to turning cities into the engines of global transformation they need them to become,” said Shareable Magazine Publisher Neal Gorenflo. “Sharing is a rare and practical systemic solution – it simultaneously increases access to wealth, reduces waste, and strengthens the social fabric. Other cities would be smart to follow San Francisco’s lead because of the low cost and massive benefits to citizens, cities, and the world.”

“Collaborative consumption is reinventing the way we live – and San Francisco is at the epicenter of the movement. This has the potential to be a source of great economic strength, as we translate our urban efficiency and creativity into new tools that the rest of the country can benefit from,” said San Francisco Planning & Urban Research (SPUR) Executive DirectorGabriel Metcalf.“I applaud Mayor Lee and members of the Board of Supervisors for recognizing the future of our City’s economy.”