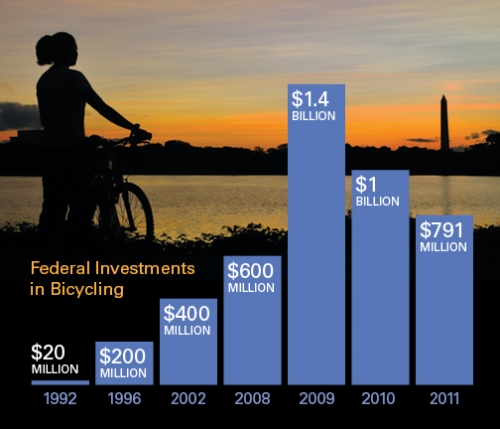 Bicyclists and pedestrians have been on the chopping block in Congress ever since the 2010 elections.  Opponents' argument goes like this:  Biking and walking are a frivolity that does not merit federal support in these tough economic times, and bicyclists especially are a selfish special interest group whose hobby can no longer be coddled in the face of huge budget deficits.

What opponents of bike/walk funding overlook is that sidewalks, trails and on-street bike facilities cost a fraction of what it takes to build or widen roads.  In the long run, more money invested in biking and walking projects will prove the cheapest way to reduce traffic congestion.  Case in point: The InterCounty Connector, a 19-mile stretch of highway that opened in the suburbs of Washington last year cost much more to build than all federally funded bike and pedestrian projects last year.

In light of these harsh attacks on bicyclists and pedestrians you’d expect the mood at the National Bike Summit—an annual gathering of bike riders, shop owners and industry officials—held last week in Washington, D.C., to be decidedly downcast.  But actually the mood was cautiously upbeat because of strong resistance from the public and many Congress members to proposals that strip bike and ped funding from the transportation bill.

Proposals to eliminate designated bike and ped funding were beat back in the senate three times last year, leading to the passage of the Cardin-Cochran amendment (proposed by Sen. Ben Cardin, D-Maryland, and Thad Cochran, R-Mississsippi) which protects funding. The House of Representatives, where Tea Party influence is strongest, has been unable to agree on a transportation bill even with a March 31 deadline looming.

What looks likely now is a short-term extension of the current transportation bill (passed by a Republican Congress and signed by George W. Bush in 2005), which would maintain bike and ped funding at current levels.  But many bike activists want to see the House pass a bill similar to the Senate’s, which would ensure continued bike and fed funding for two years, not just a few months.

Stay tuned.  Anything can happen.

And let your House Representative know how you feel. An outpouring of citizen support for bike and ped improvements has been decisive in protecting these programs over the past year.